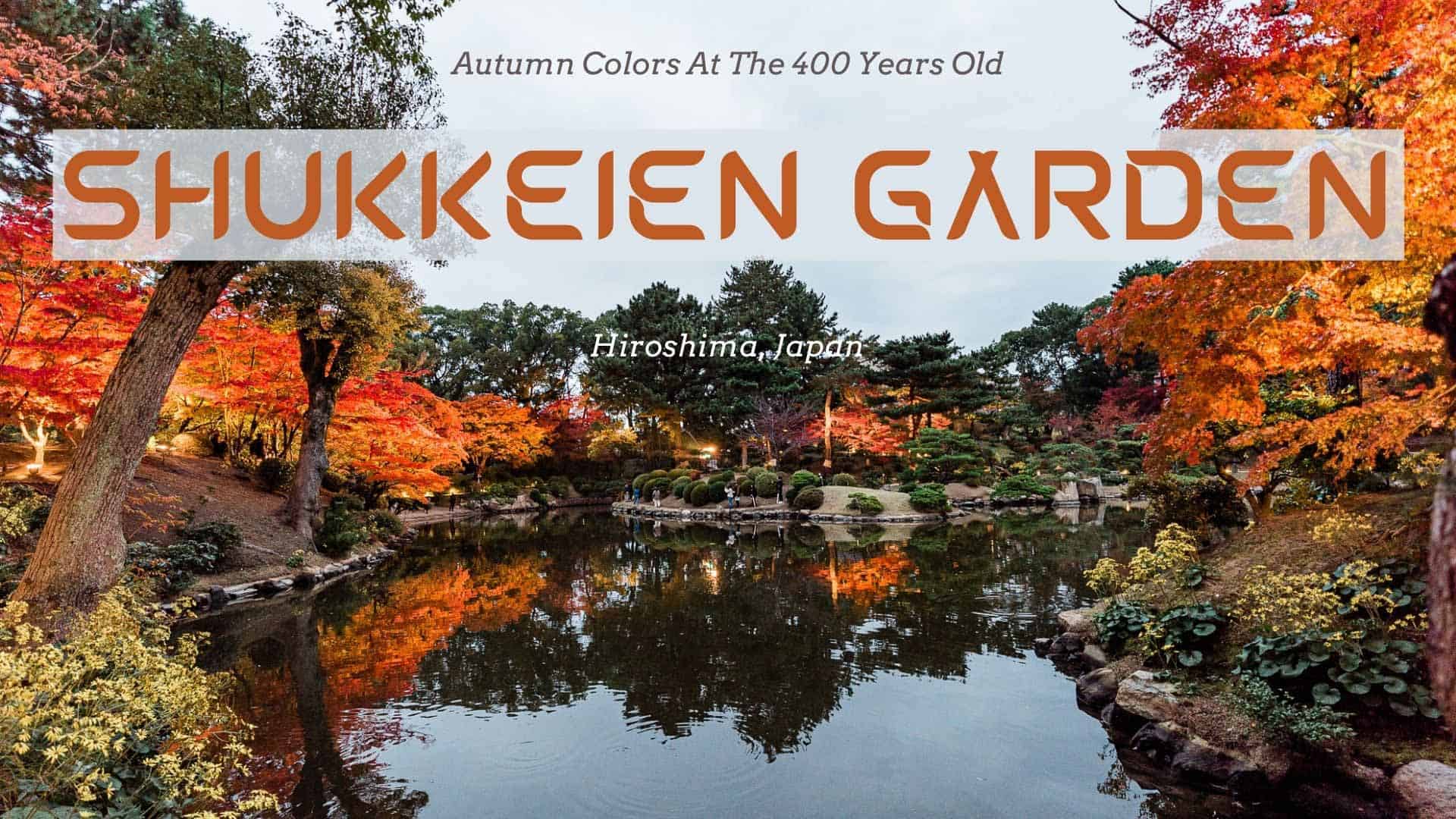 The 400 years old Shukkeien Garden is designated as a National Place of Scenic Beauty in Japan, and it easy to see why. This lovely Japanese garden is divided into various landscapes surrounding a pond with small islands and a picturesque bridge at its center. The bridge, known as Koko-Kyo or Rainbow Bridge is built to resemble a rainbow, connecting the earth and heaven.

We visited the Shukkeien Garden at the end of November, and the autumn colors were amazing! In the evening the entire garden was illuminated, creating a dense forest of vibrant orange, red, brown, and yellow leaves.

An atmospheric walkway takes you through the garden’s miniaturized landscapes. It’s a lovely place for a walk, or just to escape the bustle of Hiroshima city at any time of the year.

Don’t be surprised if you see a Japanese newlywed couple posing for pictures, as Shukkeien Garden is a popular photo spot for weddings and celebrations. If you’re in the mood you can even rent your own yukata/ summer kimono and pose alongside them.

There are several tea houses in the garden, where you can sit down and enjoy the garden view. Every year, seasonal tea ceremonies celebrating special occasions like Cherry Blossoms, are held at the garden’s Seifukan tea house.

The Sensui-tei Cafe at the entrance is open all year round, and you can stop here and have a bowl of Matcha green tea, Japanese sweets, a coffee, and a light snack. The cafe also has a nice souvenir shop.

Shukkeien is one of Hiroshima’s biggest attractions, and more than 250 000 people visit the garden every year.

A Brief History of Shukkeien Garden

The Shukkei-en Garden was constructed in 1620 as a private garden surrounding the home of the daimyo (feudal lord) of Hiroshima – Asano Nagaakira. Due to the lake at the center of that garden, the home of Lord Asano got the nickname “lake residence.”

Asano Nagaakira (1586 – 1632) was a Samurai of the early Edo period, first serving as daimyo of the Wakayama Domain and then later transferred to the Hiroshima Domain.

Daimyo were powerful Japanese feudal lords who ruled most of Japan from the 10th century to the early Meiji period (mid-19th century). They lived and ruled from their vast, hereditary properties and villas centrally located in their territory. Daimyos were under the authority of the shōgun and the emperor, belonging to the Japanese aristocratic class called kuge.

The garden was designed and built by Ueda Soko, who was a famous tea master. Ueda Sōko (1563 – 1650) was a warlord and Samurai who took an interest in the art of tea and later went into training to become a tea master. He first attended the famous Rikyū’s chanoyu practice (the Japanese Way of Tea) as a student for six years before becoming a student of the popular tea master Furuta Oribe for twenty-four years.

He designed and built several gardens and tea houses and became a tea master of the Hiroshima Domain in 1619, performing tea ceremonies. At the age of seventy, Ueda Soko retired from his duty as a Samurai and went all-in on mastering the Way of Tea. He developed and founded his own Japanese tea ceremony school, called Ueda Sōko-ryū, a school that is still active today in its 16th generation with an unbroken bloodline to Soko himself.

It is said that Ueda Soko modeled the garden after the Xihu/ West Lake in Hangzhou in China.

Shukkeien is a typical strolling garden with a circular path that takes you on a tour around the central pond to the different parts of the garden. The first circular strolling gardens in Japan were constructed in the Muromachi Era (1336 – 1568).

The strolling gardens became very popular among the Japanese daimyo (feudal lords) in the early Edo Period (1600 – 1867), and many such gardens were constructed all over Japan. Sadly, very few of these strolling gardens remain today, but one of the finest and most famous is the Kenroku-en Garden in Kanazawa, ranked as one of the top three in Japan.

Shukkei-en garden was first opened to the public in 1940.

Over the years, the garden and its buildings have been destroyed by fire several times, in 1758, 1783, and 1940. The atomic bomb that hit Hiroshima on the 6th of August 1945 destroyed the garden, but miraculously many of the trees and flowers survived and actually blossomed the following year.

The restoration of Shukkeien Garden began in 1949, lasted for 30 years, and the garden is now more beautiful than ever.

The garden’s name Shukkeien (縮景園) can be translated to “shrunken-scenery garden” in English, which describes the garden quite well. Every part of the garden resembles a miniature version of a different landscape like valleys, mountains, and forests.

The garden contains many of the classical elements of Zen gardens – rocks, a pond with carp fish and islands, bridges, and pavilions.

Even though the Shukkeien garden only covers a space of 40 000 square meters, it seems much bigger than it is. Each part is thoughtfully designed and has a harmonic layout. It feels like there are several small gardens within the actual garden.

The garden is designed as a classic “circular tour,” where a pathway will lead you around the site, ensuring that you visit all its stunning parts and get to take in all its sceneries.

The map above (Google Maps): The highlights of Shukkeien Garden, Hiroshima

Right in the center of Shukkeien Garden lays the beautiful Takuei Pond.

The pond houses more than 10 islands altogether, small and big ones, and lots of white and orange koi/ carp fish. You can even feed the carp fish; they sell a bag of food for 100 JPY.

Surrounding the pond are mountains, valleys, bridges, and tea houses. Follow the walking path that takes you around the pond and through the different zones of the garden.

A beautiful grey brick stone bridge spans over the pond’s center, called Rainbow Bridge or Koko-Kyo in Japanese. The bridge is so cute and fits perfectly into the garden giving it a proper Zen vibe.

You can walk over the bridge, which takes you over to the Seifukan Teahouse.

The Seifukan Teahouse is located next to the pond in the center of the Shukkeien garden. The teahouse is built in a traditional Japanese Sukiya-Zukuri architectural style with a shingled roof, and lyre-shaped Katomado/ pointed arch or bell-shaped windows.

Traditional tea ceremonies, Chakai, are held at the tea house each month to mark and celebrate the different seasonal flowers that you can see around the garden:

If you want to participate in one of these tea ceremonies, check Shukkeien Garden’s official webpage for dates and times.

The Shukkeien Garden has a memorial statue in memory of all the victims of the atomic bomb that hit Hiroshima during World War II in 1945. The Shukkeien atomic bomb victims memorial is a small stone statue located on a hilltop overlooking the Enko River, on the garden’s north side.

This memorial is a bit forgotten, and obviously sees much fewer visitors than the statues in the Hiroshima Peace Memorial Park, but it is a great place to pay your respect to the atomic bomb victims and reflect on Hiroshima’s tragic history.

Btw, if you happen to be in Hiroshima in the first week of August, make sure to catch the atmospheric Hiroshima Peace Message Lantern Floating And Peace Memorial Ceremony on the 6th of August every year. It is simply stunning.

The Hiroshima Prefectural Art Museum is located in the outer part of Shukkeien Garden. The museum, founded in 1968, has nearly 5000 artworks, especially modern Western and Japanese paintings, and Japanese and Asian crafts.

The museum has a lovely Italian restaurant, the Zona in Centro, on the 1st floor with huge floor-to-ceiling windows with great views of the Shukkeien garden. It also has a tea room on the 3rd floor serving cakes, matcha green tea, and a miso soup set (plus different drinks and coffee). The museum shop has a small cafe serving coffee, tea, and sweets like muffins and donuts.

If you have the time, you can buy a combined ticket (600 JPY = US$ 6) and visit both the garden and the museum.

We really enjoyed our evening at Shukkeien Park, and while we think it is well worth a visit at any time of year, the park really comes alive during fall colors. If you are lucky enough to be in Hiroshima at that time, don’t miss it!

Shukkeien Japanese Garden is on our recommended Hiroshima itinerary that you can find here.

Read next, our other articles about Hiroshima:

⇒ What To Do In Hiroshima – A 1-Day Hiroshima Itinerary

⇒ Where To Stay In Hiroshima – Our Favorite Hotels & Areas

I would also recommend that you do a trip to Miyajima from Hiroshima. Read our articles about Miyajima Island:

⇒ What To Do In Miyajima – A 1-Day Miyajima Itinerary

⇒ A Journey To The Sacred Mount Misen – Miyajima Ropeway

PIN IT FOR LATER!
Hover over the pictures below, and press the red “Save” button that pops up: 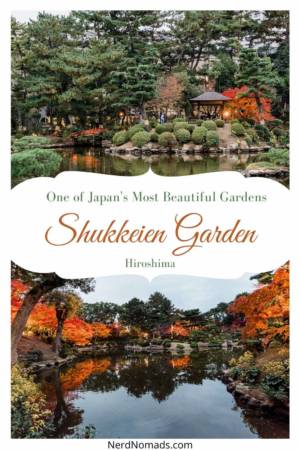 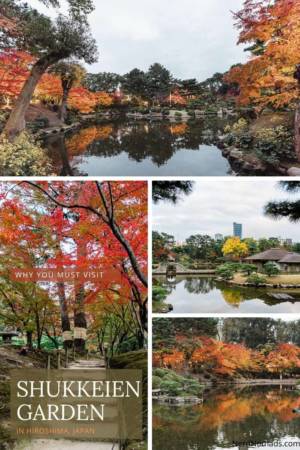 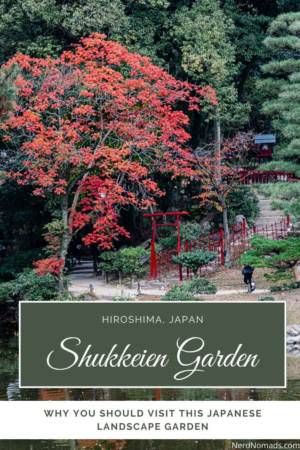 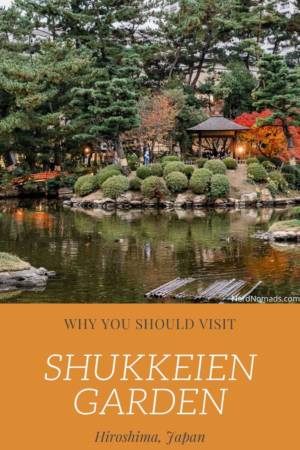 Have you been to a beautiful garden that you totally fell in love with? Will you visit this garden if you are going to Hiroshima? What are you looking forward to seeing in Hiroshima? Do you have any questions about Hiroshima and its attractions? Please leave a comment in the comment area below. We would love to hear from you! If you liked this article and found it useful, please share it on social media. Thank you! 🙂

What is this article about

How to get there

Shukkeien Garden is fantastic all year round

It is particularly stunning in mid-February when the plum blossom season is on, March/ April during cherry blossom, and in November during autumn colors

Shukkeien Garden was constructed in 1620