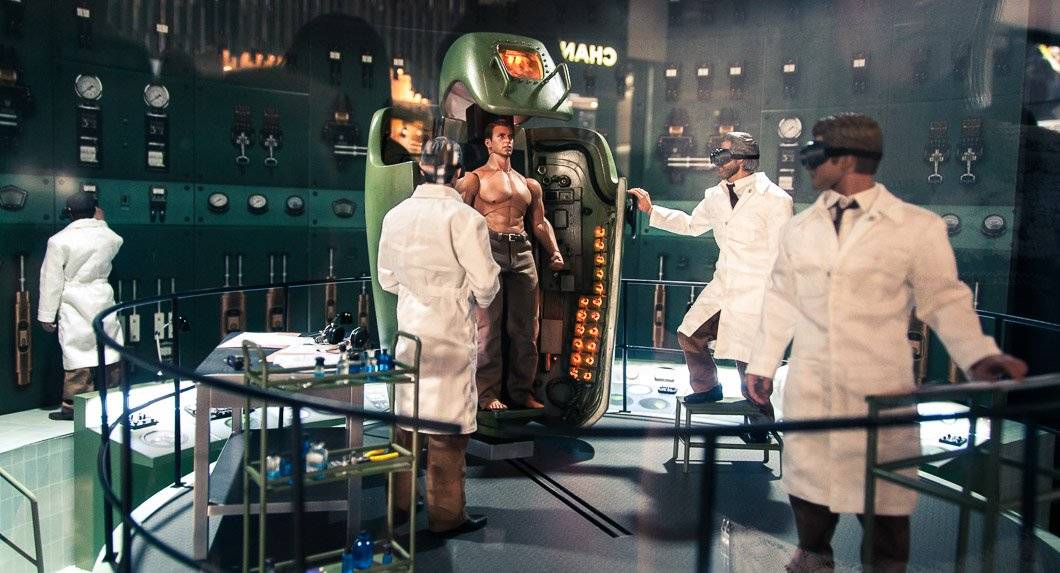 Hong Kong, the skyscraper city at the edge of China, is not just a shopping mecca for fashion, photography equipment, and electronics. It certainly is that as well, but dig a little deeper and you can find entire shopping malls dedicated to almost every conceivable interest.

Whether you are a movie poster collector looking for classic Bruce Lee posters (who isn’t), or looking for the latest in Anime, Hong Kong will rarely disappoint.  And if you are a movie nerd like me with a weakness for the best movie action figures in the universe, then a visit to Hot Toy Hong Kong’s secret base is simply unmissable!

Let me back up a little. While shopping in Kowloon a few days earlier we accidentally stumbled on an exhibition of action figures from Marvels Captain America universe at Hysan Place shopping mall. Having just seen the movie Captain America: The Winter Soldier a few days earlier in 4D cinema in Bangkok (will have a blog post on 4D cinema up soon. It is amazing!) , it immediately caught our attention. An entire S.H.I.E.L.D base had been constructed in the lobby! 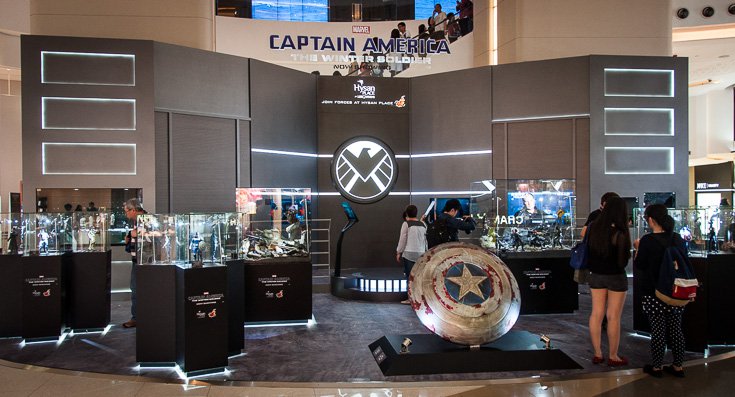 The action figures, the sets, and the props were simply of an amazingly high quality! Walking around the exhibition the first thing I wondered was “Who made these?”, shortly followed by “Where can I buy them?!”. Well, the answer to that is through Sideshow Collectibles, but more about that later 🙂 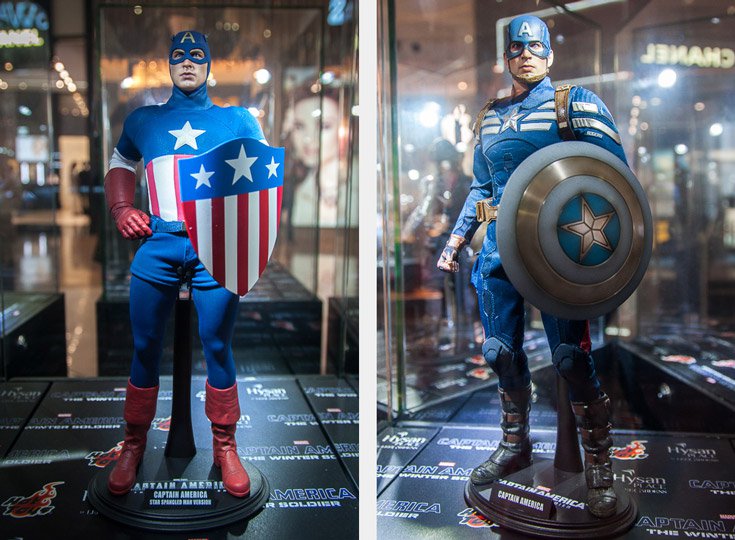 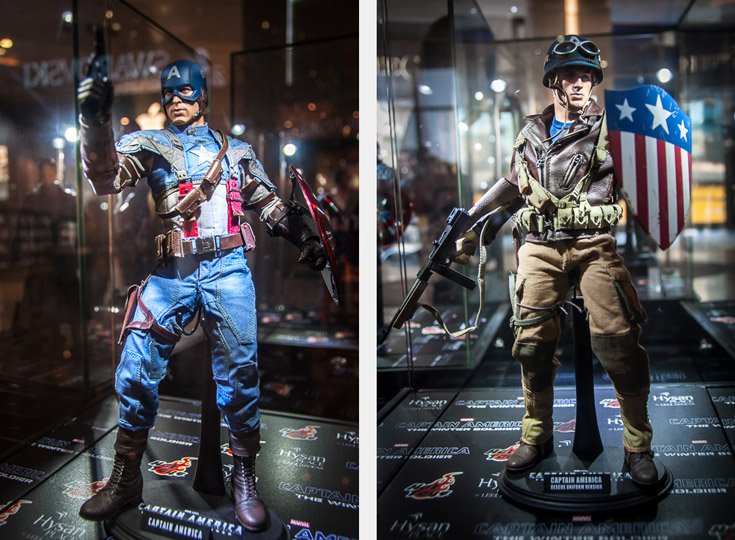 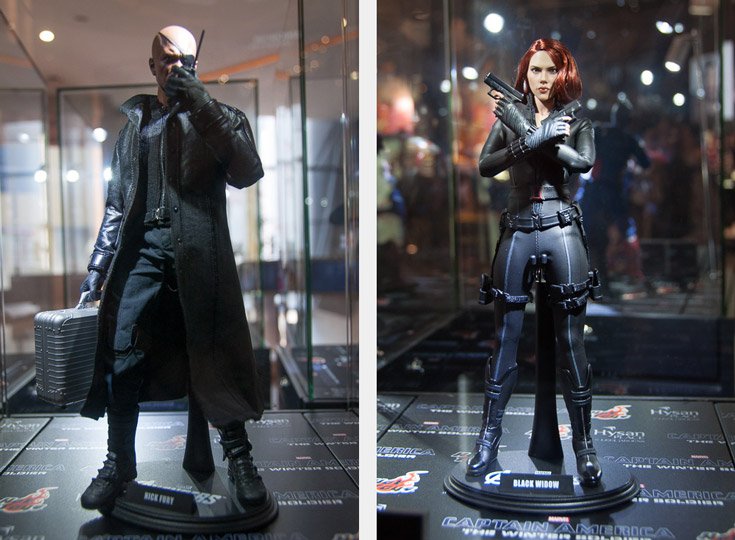 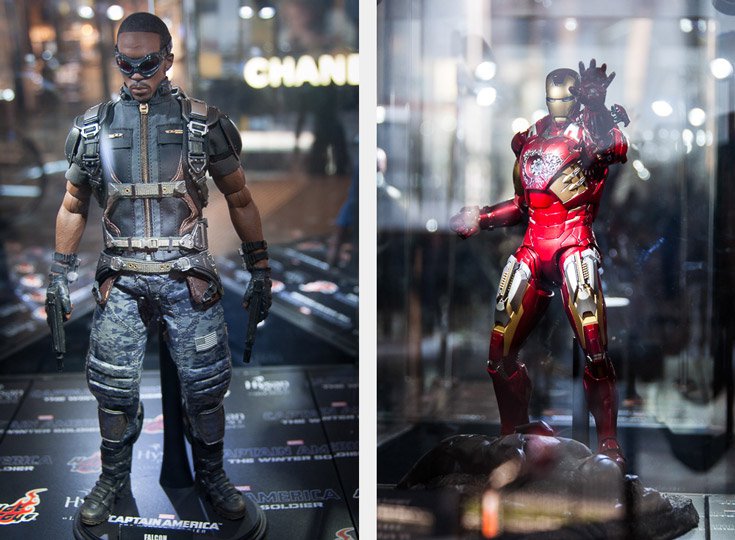 The Falcon & Iron Man (what’s he doing here, he’s not in this movie) 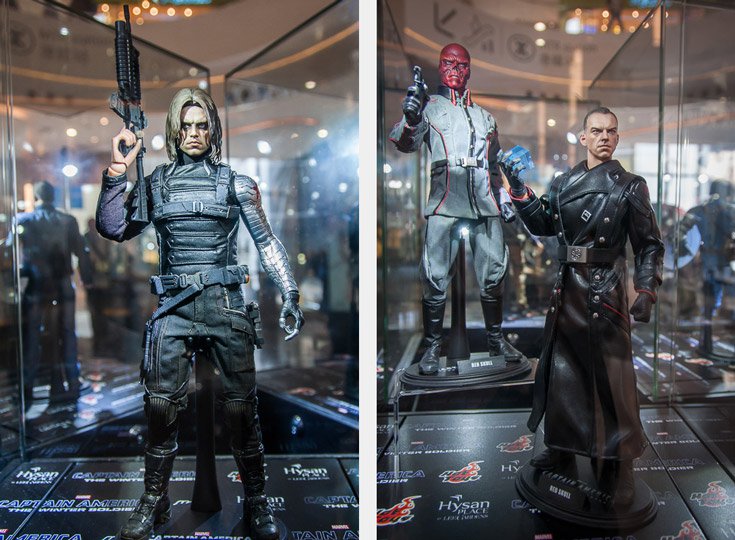 The Winter Soldier aka James “Bucky “Buchanan Barnes & The villain from the first movie. Redscull aka Johan Schmidt

They had a few set pieces showing action scenes inspired by the movies. 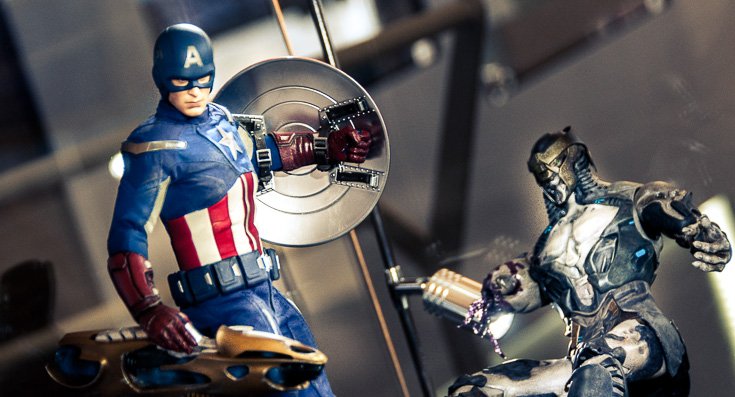 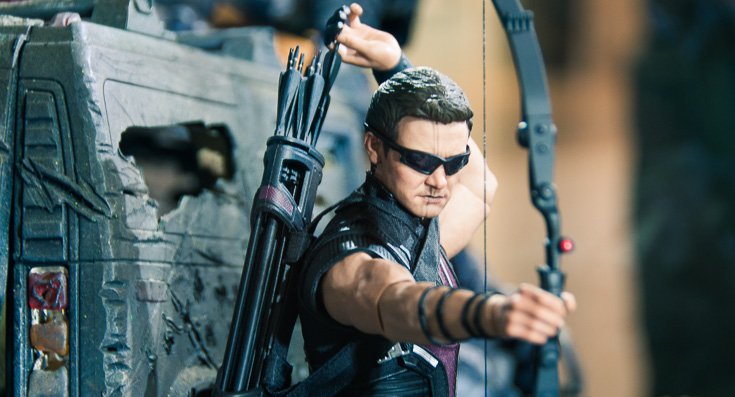 Visit to the Hot Toys Hong Kong Secret Base

A little frenetic online research revealed that the manufacturer is a Hong Kong company, Hot Toys Limited. I had heard of Hot Toys before but did not know that Hong Kong is their home base. Their address led us to the Sino Centre,  a grey and bland office building in the Monk Kok area. We stepped into the elevator, and when the doors opened again on the 22nd floor, this is what we saw (!!!): 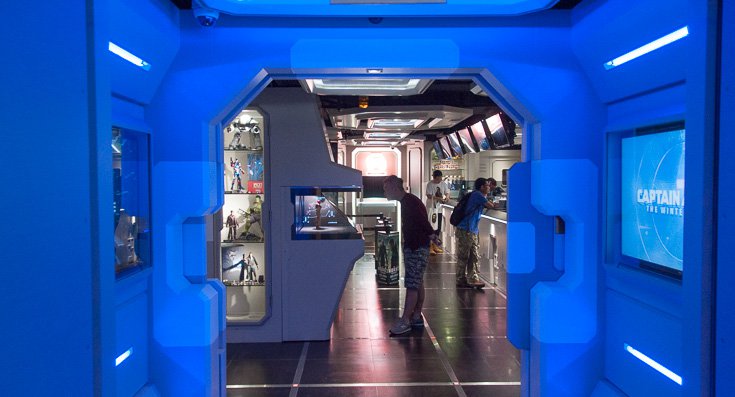 Holy shit! We just stepped onboard an Imperial star cruiser! These doors even have the sound effects! Welcome to nerd heaven! 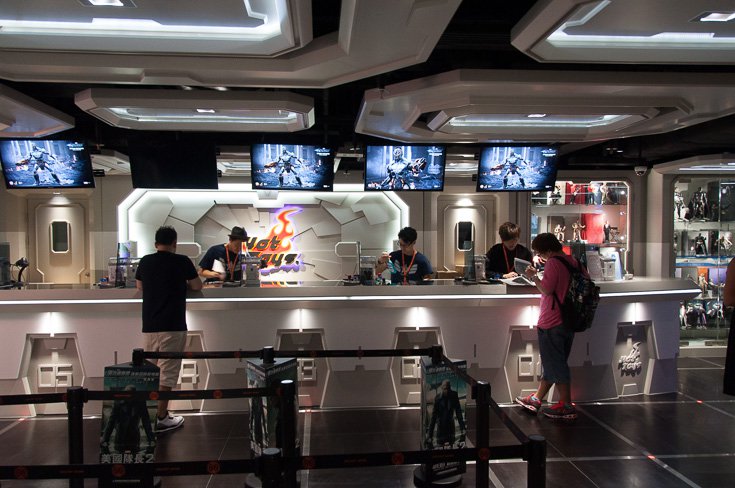 This has to be the coolest store ever!

Once the shock and joy of the shop itself had passed, it was time to have a closer look at what they have to offer of collectible toy merchandise. And that is a lot! Founded in 2000, Hot Toys is today widely regarded as one of, if not the, best producer of collectible toys  in the world. Especially movie-related collectibles. As I walked around, my jaw hit the floor and I felt my wallet screaming in horror. 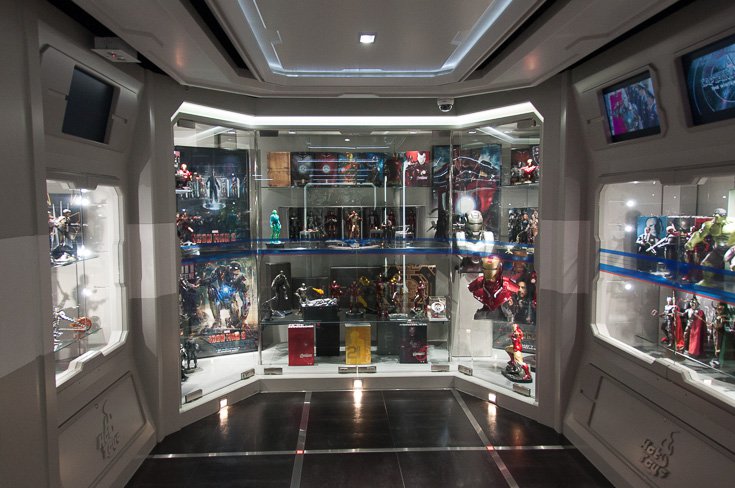 In this corner of the spaceship, I mean store, is the Marvel collection.

There were collectibles from a lot of my favourite movies! Like Star Wars!!! Drool! 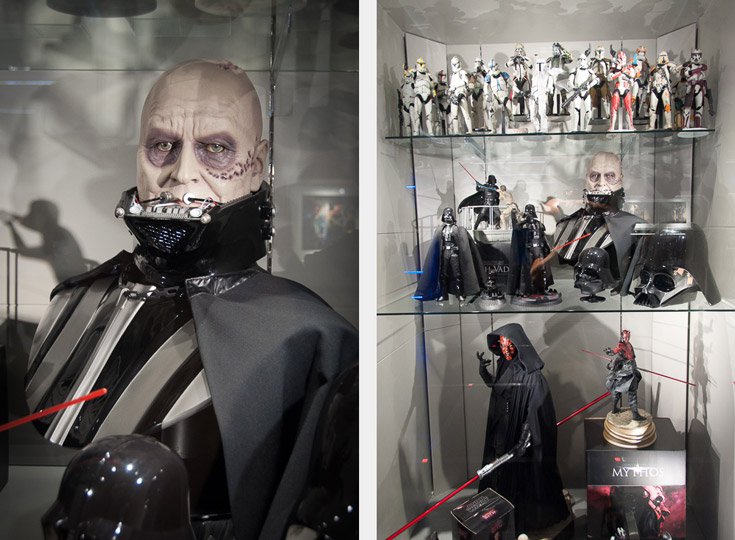 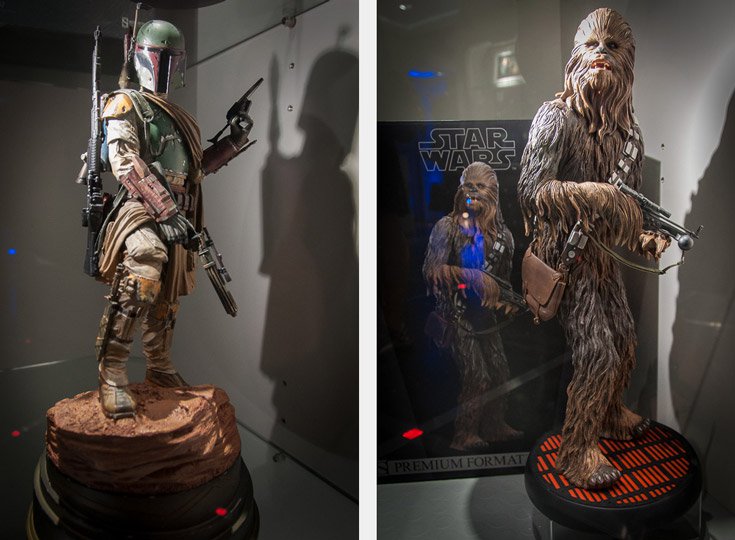 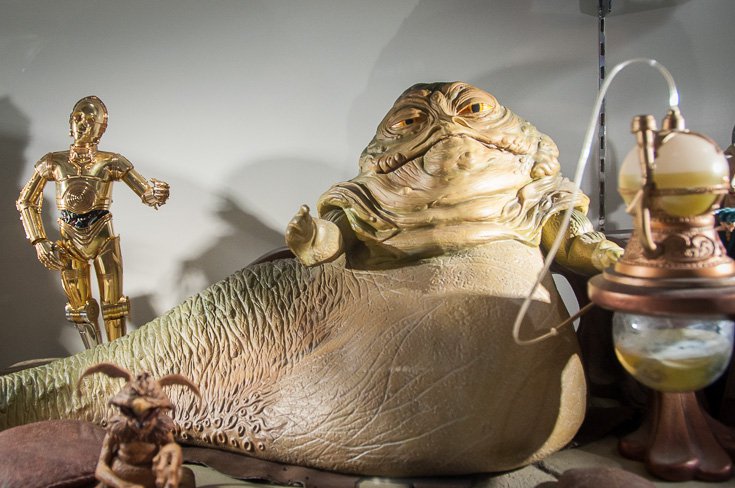 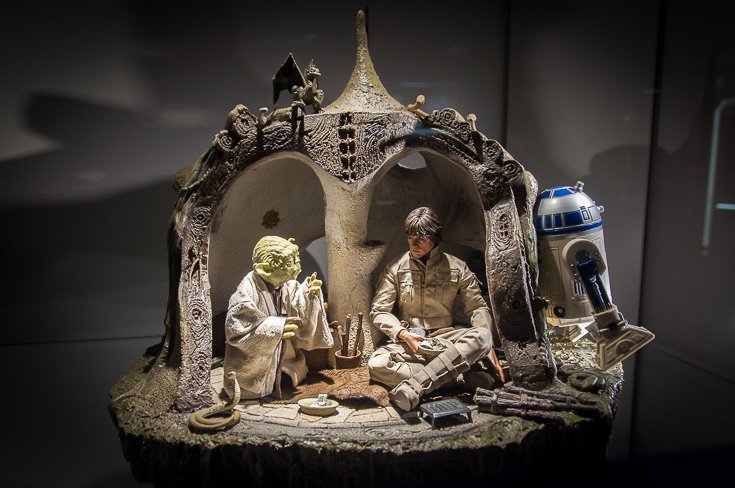 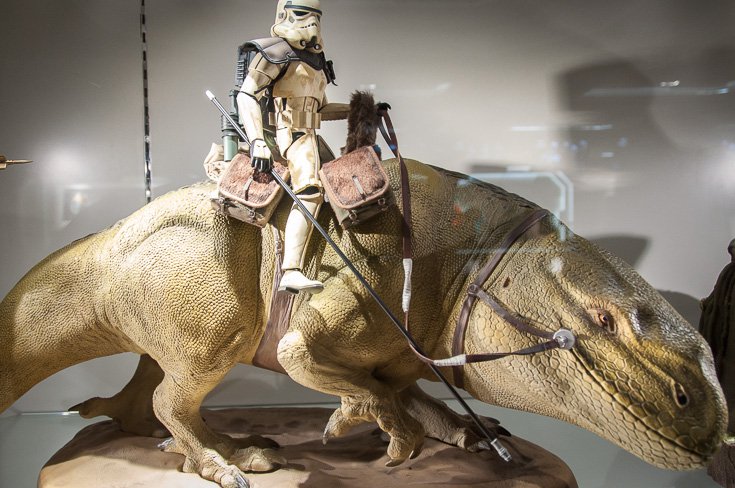 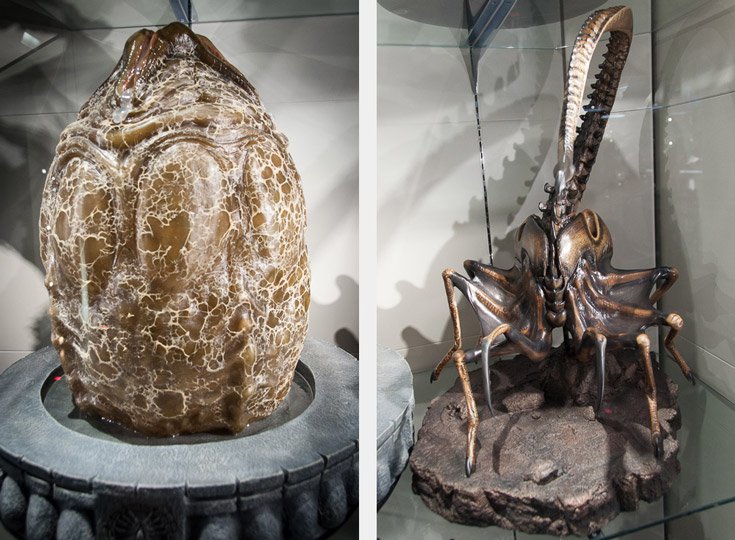 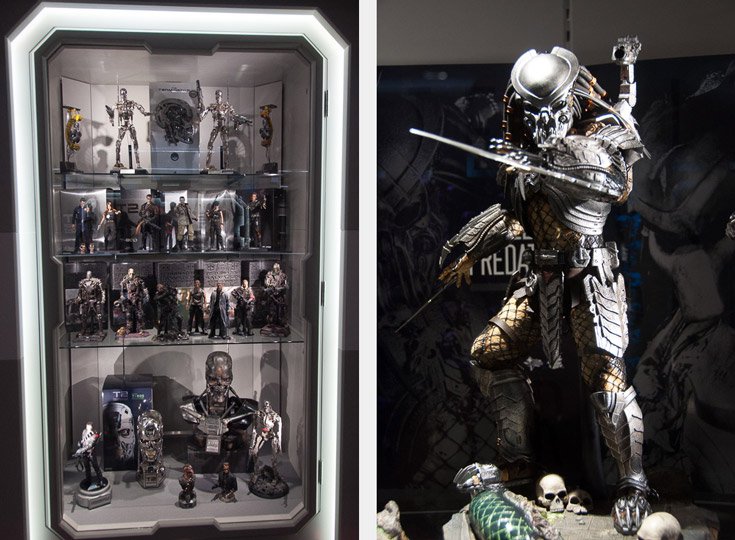 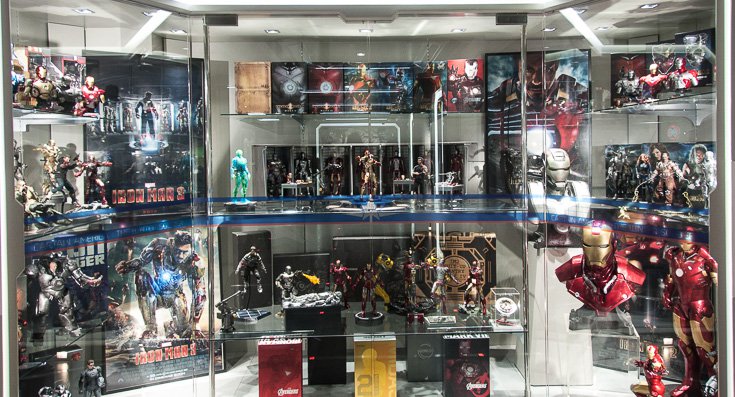 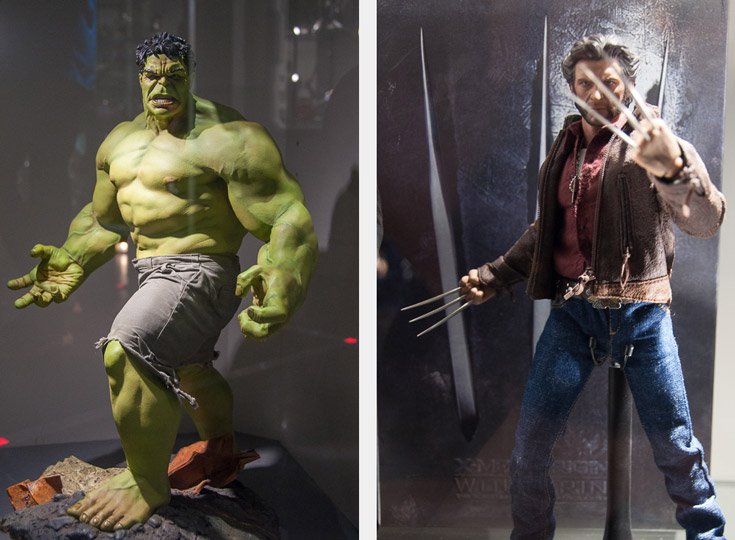 They also had an  awesome hologram display of Ironman! There is a Hot Toys Iron Man action figure standing inside the display, with 3D holograms being projected on to him. I thought it was very cool! Check it out in the video below! 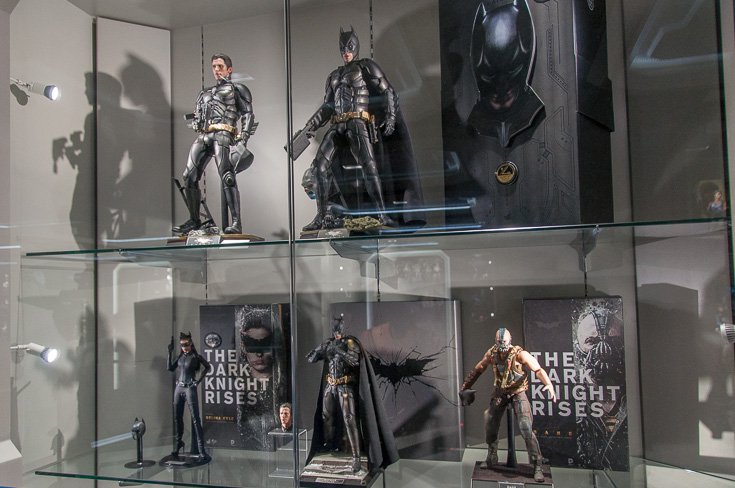 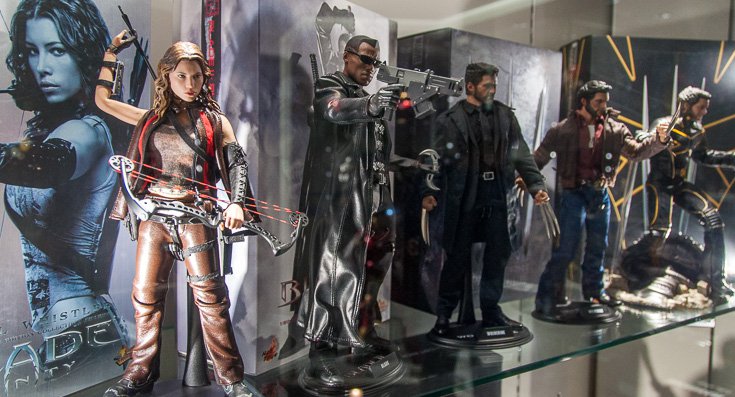 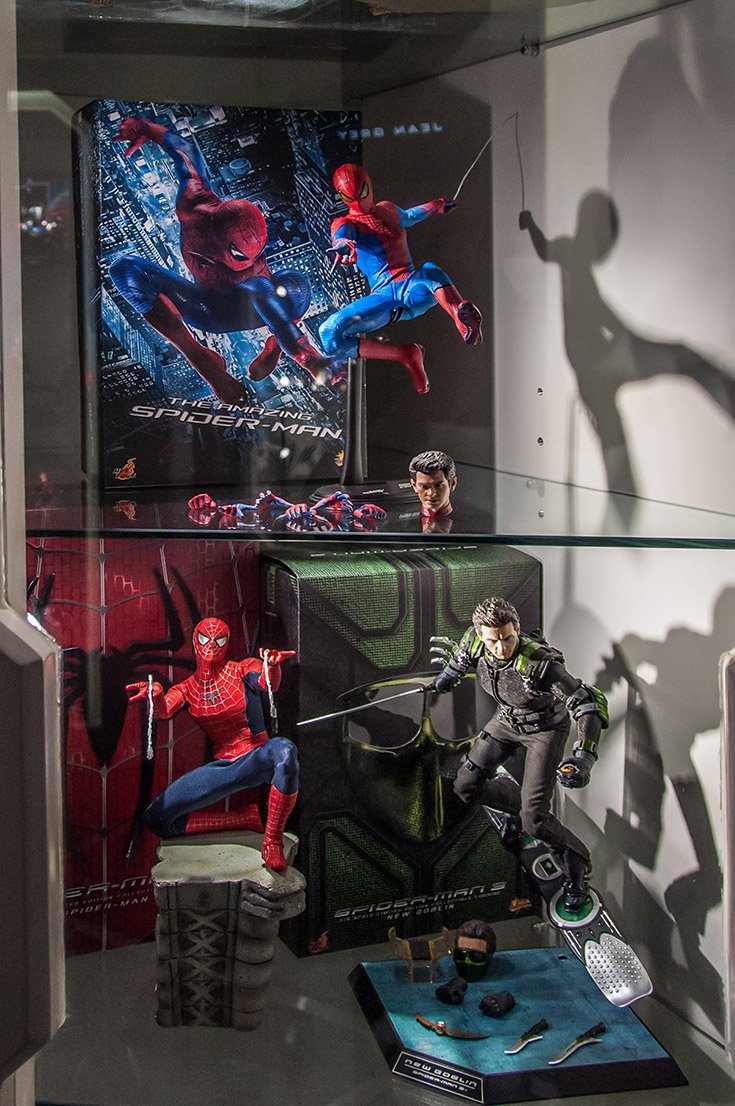 Who are these Hot Toys action figure guys?

Hot Toys designs and manufactures collectable merchandise. Their speciality is 1/6th scale figures, like the once you see here. But they do have a lot of other stuff as well, just check out Darth Vader with his mask off, or the egg from Alien! Their figures are remarkably detailed and meticulously crafted down to the smallest accessory. They truly are like little works of art when you see them up close.

To date, they have made action figures for more than fifty movies! And their not all superhero movies, among them are The Godfather, Edward Scissorhands, and Back to The Future.

Of course, they are not cheap, a Captain America figure will for instance cost you approximately 200-250 USD. I asked about the Captain America collectibles on display at the Hysan Place and was told they are from the upcoming collection due out fall 2014. They are available for preorder, but they do not ship internationally. I have seen older Hot Toys figures for sale on Ebay, and they usually sell out very quickly. Often they become highly sought after collectors items, and the price goes up, up, up.

The best place to buy these online is through sideshowtoy.com

So Did I buy Anything?

Of course, I did! We have been looking for a mascot for Nerd Nomads for a while. Originally we thought of Yoda but couldn’t find one anywhere. The one they had at Hot Toys was part of a set, so we had to forget about Yoda. But then tucked away in the corner of the room I spotted a great hero of mine. 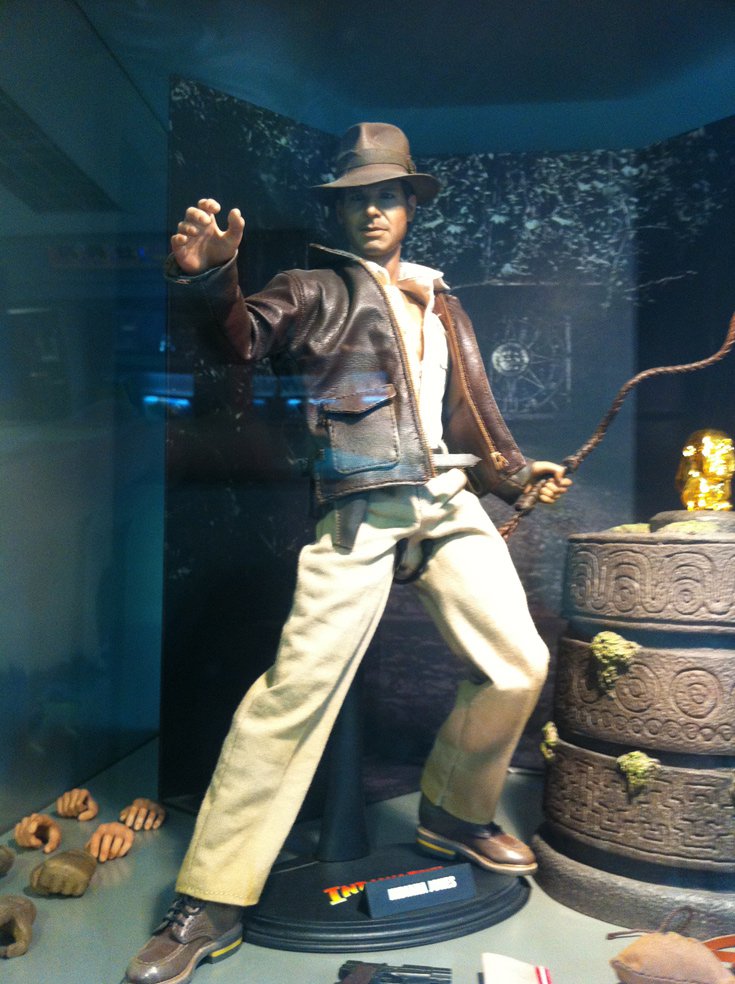 Yes, that’s right, Indiana Jones! Who better to front a travel & adventure site than Indy! The most adventuresome of them all! As an action figure, he is amazing. Part of a limited edition Raiders of The Lost Ark – Indian Jones, that Hot Toys did back in 2011.

Fully poseable, with lots of props from the movie, including the whip, two guns, hat, gloved hands, the staff of Ra (which is huge by the way), sandbag, backdrop etc. Even a notebook with real paper to put in his bag, which is made of real leather and closes with a little magnet! He was the last one they had for sale anywhere in Hong Kong, possibly in the world!

So now we are three on our adventures, Maria, me and Indy. Expect to see him pop up from time to time in our photos 🙂

Where To Stay In Hong Kong

Hong Kong is packed with hotels at all price levels. It is however not a cheap city to stay in when it comes to accommodation. below are some of our favourite hotels.

Island Pacific Hotel
We stayed at the Island Pacific Hotel on Hong Kong Island. We really liked it! Nice rooms, clean, big bathroom, great and very helpful staff. The hotel is located a little away from the main action on Hong Kong Island, but the hotel has a free shuttle bus that goes into the city center. The tram also stops close to the hotel. We walked into the city center several times, so it is absolutely doable.
Click here for the latest prices

The Langham, Hong Kong
If you want a little bit of Hong Kong luxury, then this is the place! It is located next to Harbour City Mall and numerous other shops and restaurants. Entrance to MRT TST station is across the street.
Click here for the latest prices

99 Bonham All Suite Hotel
This is a stunning apartment hotel, where all the rooms have a kitchen. It is located only 5-minutes from the Shen Wan MRT station.
Click here for the latest prices

Lodgewood by L'hotel Mongkok Hong Kong
A new, modern and trendy hotel. Good value for the money. The rooms are spacious by Hong Kong's standard.
Click here for the latest prices

Tuve
This boutique hotel is something special and unique. Very modern, stylish and chic.
Click here for the latest prices

We used Lonely Planet`s Hong Kong guide book on our trip. It was very good! Click on the pictures below to read more about each book on Amazon (affiliate links):

Which action figure is your favorite? Will you be visiting Hot Toys secret base next time you are in Hong Kong? If you like this blog post and find it useful, please share and like it on social media! Thank you so much! 🙂 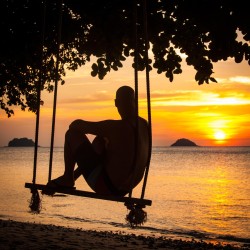 Espen Egeland
Espen, a Norwegian born travel nerd, got his start as an independent traveler at age 19, when he packed his backpack and bought a one-way ticket to Indonesia in search of adventure. Since then he has explored more than thirty countries across six continents. He holds a master's degree in computer science, but his true passion is photography, filmmaking and sharing his love of travel.

In 2014, while on a year-long trip across South - East Asia, he co-founded the travel blog Nerd Nomads and since then he's been a full-time traveler. See our about page for more about Espen.

If you are interested in visiting Hong Kong, please read our Ultimate Travel Guide to Hong Kong: