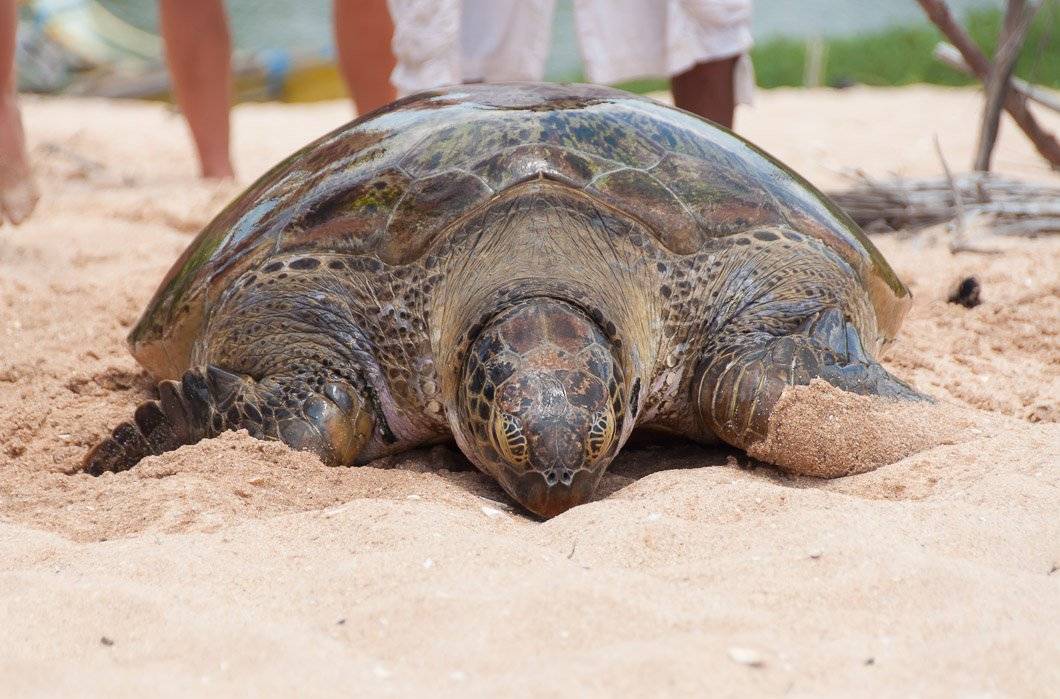 Our third day at Tangalle started as normal on the beach – us laying flat out relaxing, reading, and listening to music. All of a sudden a man came running towards us shouting “Come and see, come and see!!! Hurry!!“.

First, we just thought he was selling fruits or souvenirs, so we pretended to be asleep. But the man kept on shouting, so we stood up and followed him a few meters along the beach, and we are so glad we did!

It turned out that during the night a sea turtle had wandered up at the beach to lay her eggs, but had taken the wrong way back and ended up in the freshwater laguna instead of the sea! Poor sea turtle. 🙁 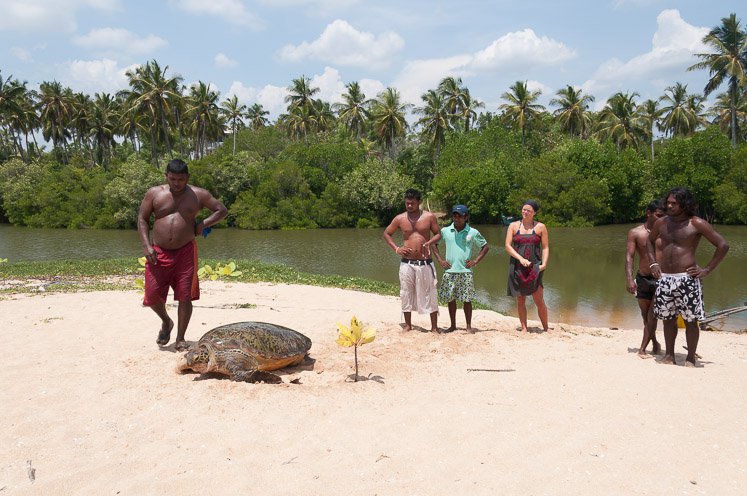 Sea turtles are among the earth`s endangered spices, and are one of the earth`s most ancient creatures, being on our planet for around 110 million years, since the time of the dinosaurs.

The Long Walk Towards The Sea 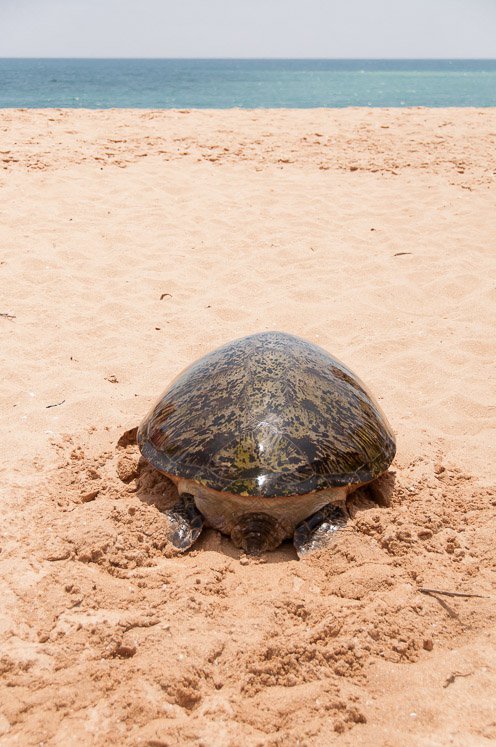 It was a long way for the sea turtle to walk!

Sea turtles color varies between yelling, black and greenish, depending on the species. There are seven species of sea turtles, and this is most likely an olive ridley sea turtle.

Unlike other turtles, the sea turtles can not retract their legs and head into their shells. The shell is streamlined which makes it perfect for swimming through the water, but not so much for wading through the sand. 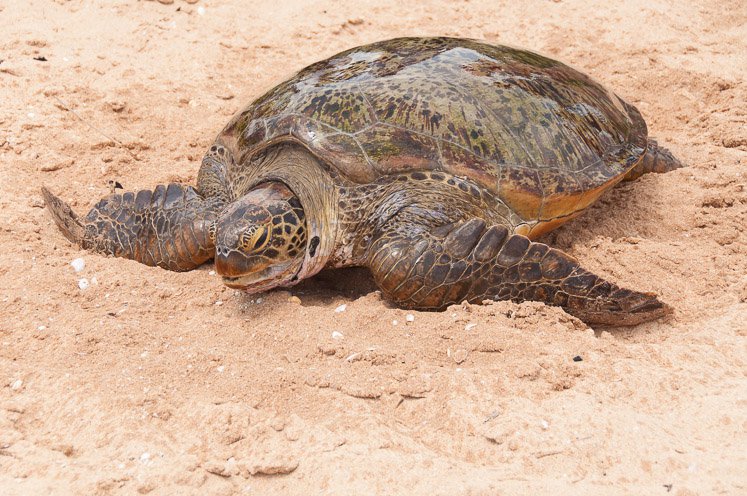 The sea turtles spend most of their lives in the sea, so walking on the beach is not easy for them. It was also a very hot day, 30 °C, and the sand was really warm, too warm for us to walk barefoot.

The sea turtle was really struggling in the hot sand and was stopping all the time looking tired. They have strong legs, though, as they undergo long swimming migrations, some as far as 1400 miles, between their feeding grounds and the beaches where they nest. 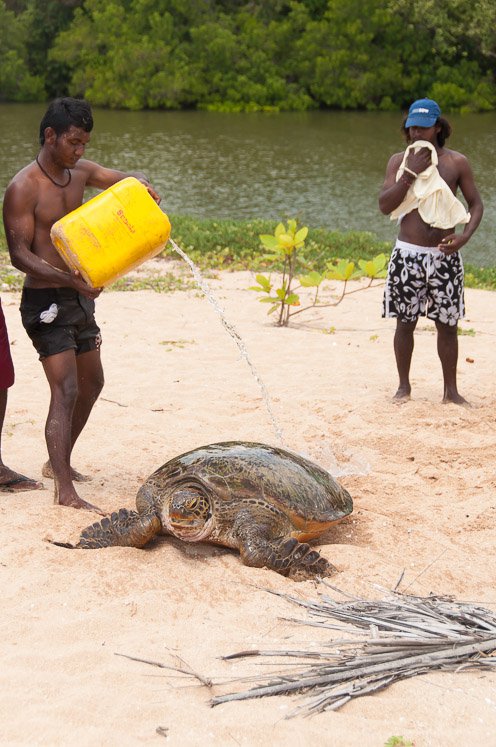 To cool the sea turtle the local men carried water from the sea and poured over her. 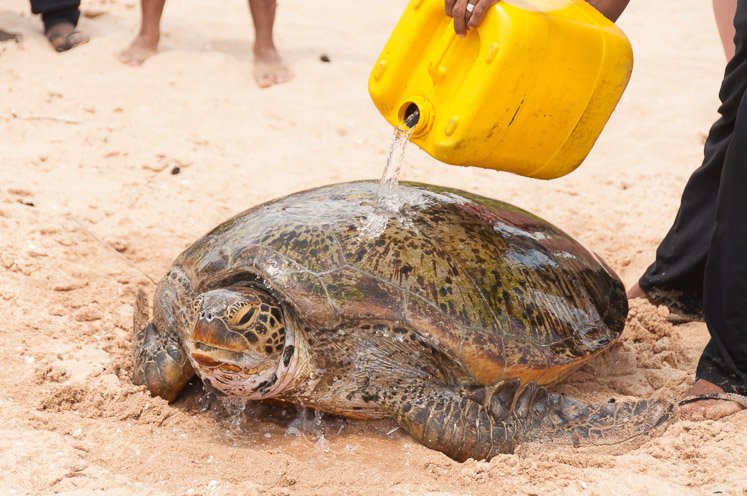 The usual length of a feeding dive is five minutes or less though. An amazing fact: their heart rate slows to conserve oxygen – nine minutes may elapse between heartbeats! Wow! 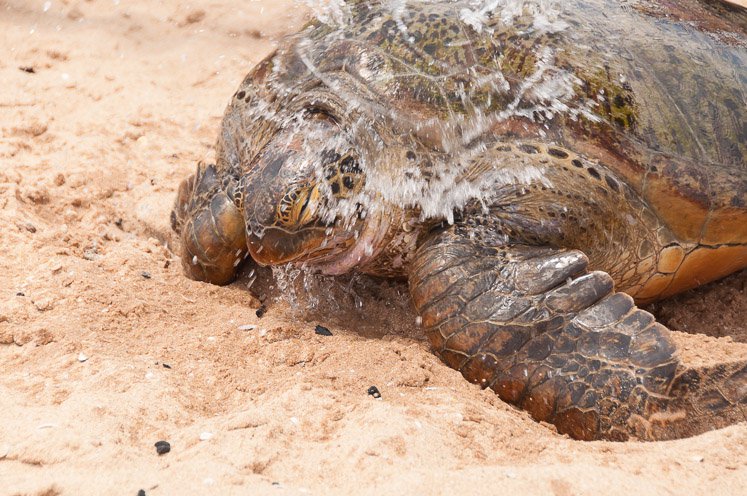 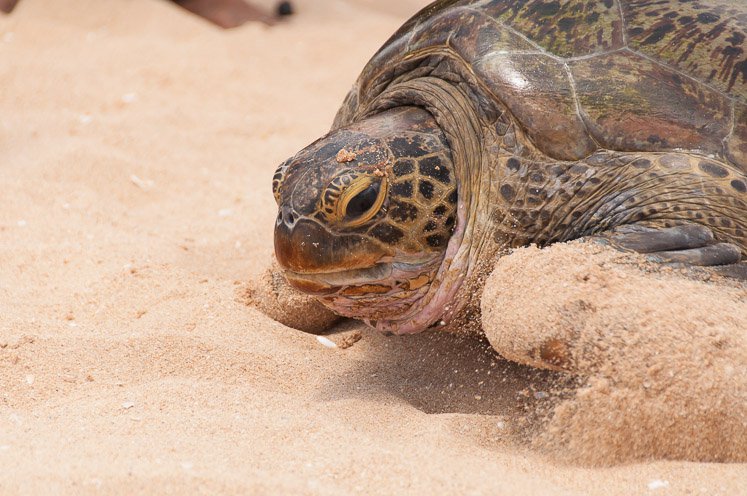 After each water break, the sea turtle regained more energy and started dragging herself over the hot sand again. 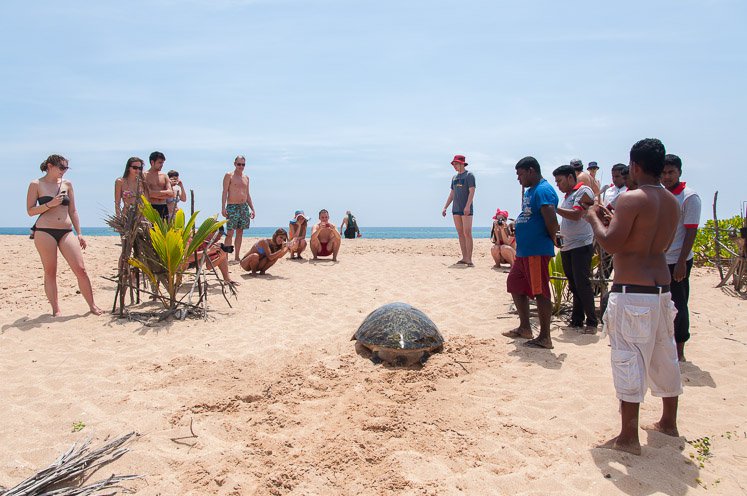 More and more people came running to watch the sea turtle, making a corridor for the sea turtle to pass through. This is apparently a pretty big sea turtle and is probably around 80 years old.

This sea turtle was born on this beach. Sea turtles, like salmons, will return to the same nesting grounds at which they were born. When females come to the shore they dig out a nest in the ground with their back flippers, bury their clutch of eggs, between 70 – 190 eggs, and return to the ocean.

This one went the wrong way, though, and ended up in the laguna. After hatching, the babies may take as long as a week to dig themselves out of the nest. They emerge at night, move toward the ocean and remain there, solitary, until it is time to mate. But very few survive to adulthood.

It is uncertain whether this sea turtle did lay her eggs or not, before ending up in the freshwater. The locals said that if she did not nest, she will come up to this beach again some other night. 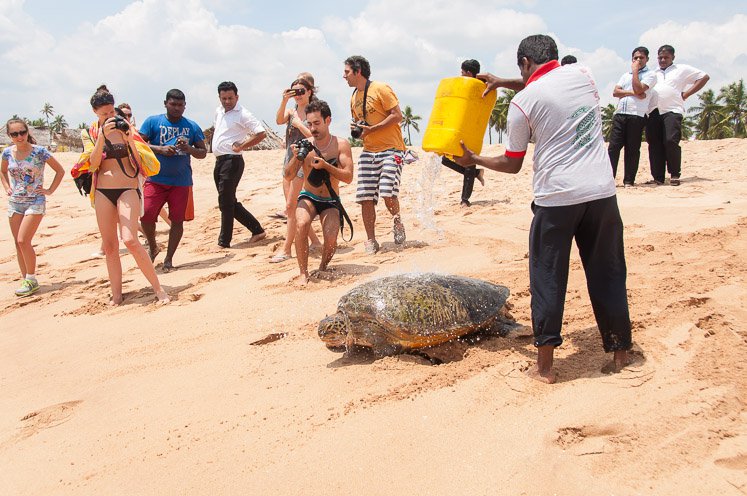 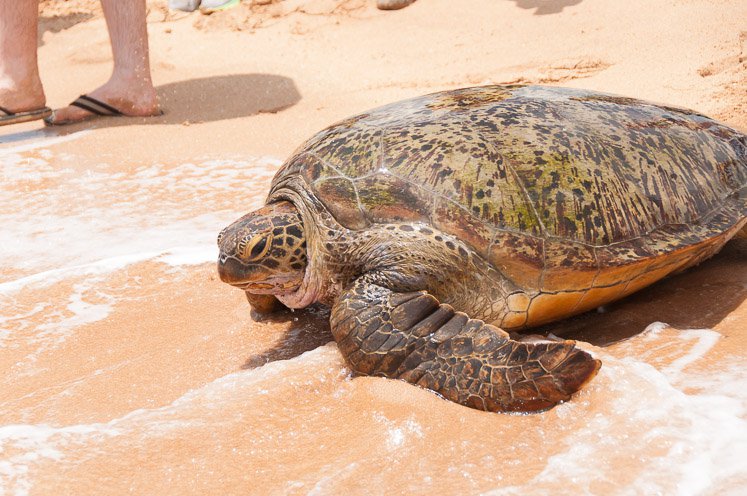 And finally, the sea turtle reached the sea! 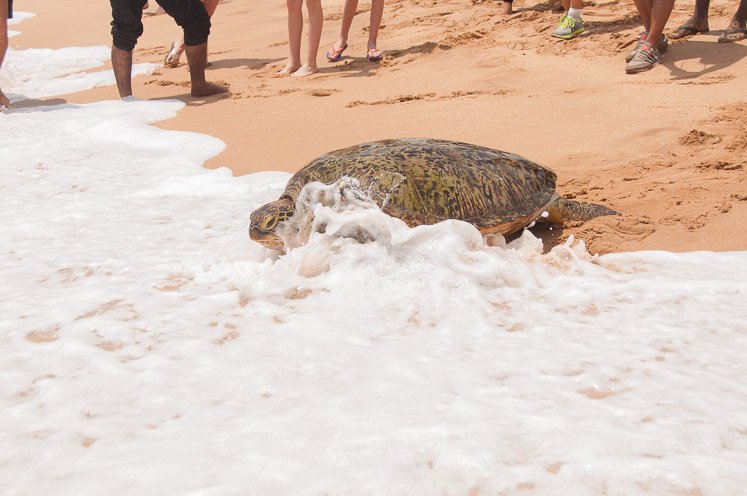 She looks so happy and relieved to have reached the sea. 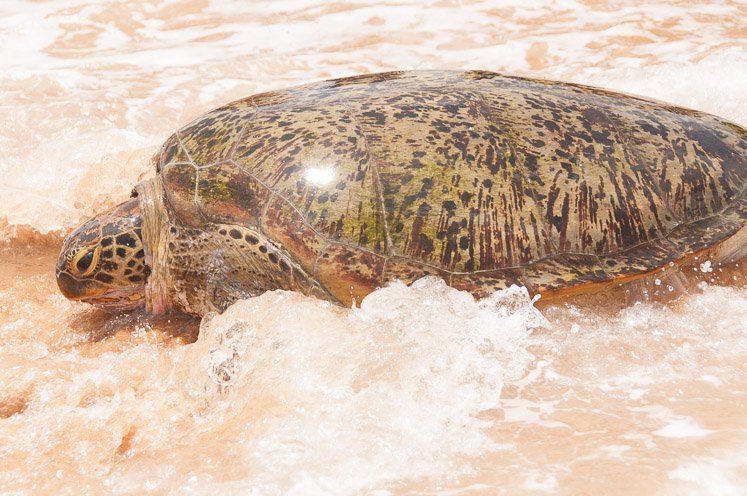 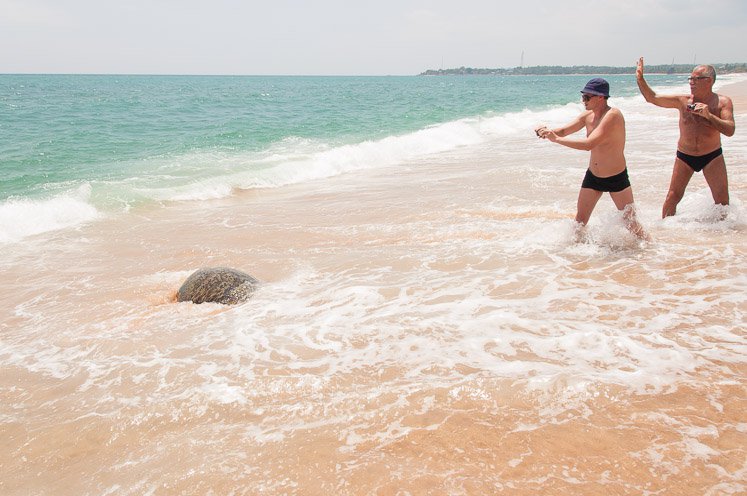 Bye, bye beautiful sea turtle! Have a nice life out in the sea where you belong! 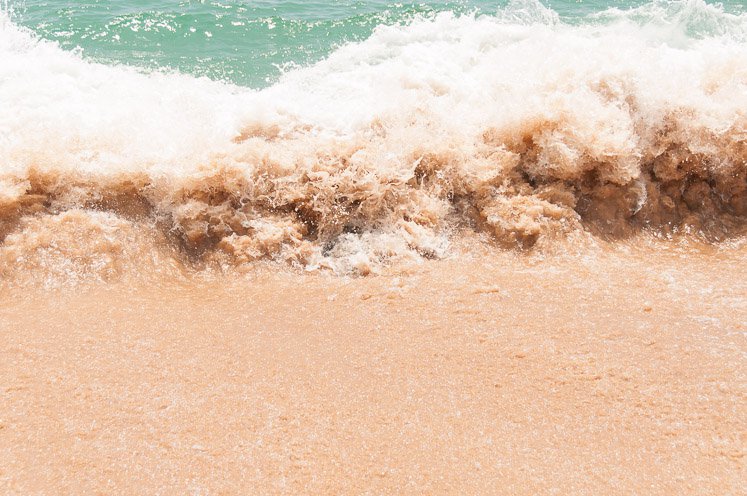 Happy ending! We were lucky to be at the right place at the right time that day and able to be a part of this rescue mission. Sea turtles rarely come up onto the beach during the day, so getting good pictures and videos are very rare. We were very fortunate to even see a sea turtle at all!

At the neighboring beach to Tangalla; Rekawa Beach, it is apparently possible to go turtle-watching, but you have to pay 1000 Rs to be allowed to enter the beach! And even then you are not guaranteed to even see a turtle. PS! In Lonely Planet there is an error, saying that April to September is the best time to see the turtles, but that is wrong. The mating season for sea turtles in Sri Lanka is February – October.

We used the Lonely Planet`s Sri Lanka travel guide on our trip. You can get that and other great books by clicking on the pictures below which will take you to Amazon.com (affiliate links):

PIN IT FOR LATER!
Hover over the pictures below and press the green PIN IT button that pops up: 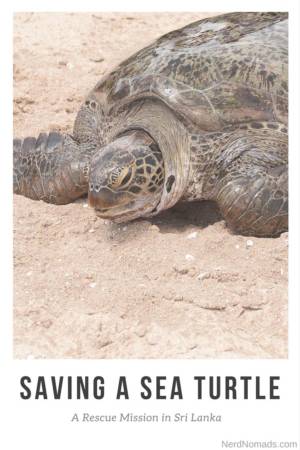 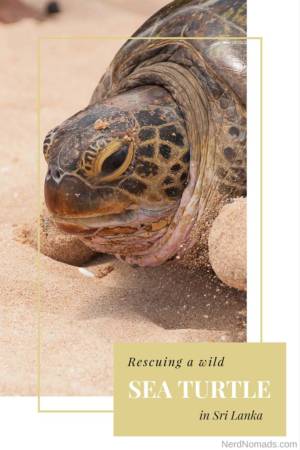 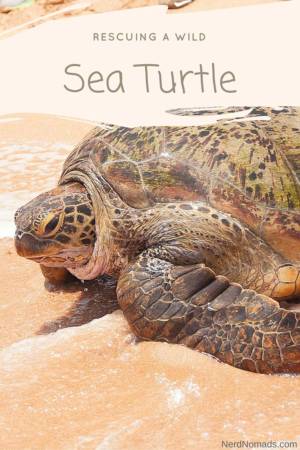 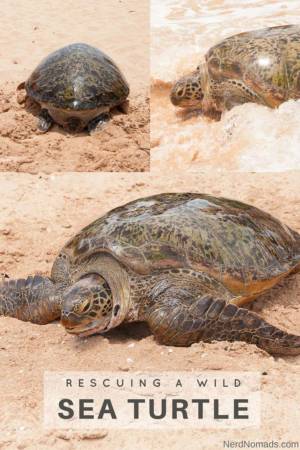 Disclosure: Some of the links in this article are affiliate links, and we will earn a small percentage of the sale if you purchase through them at absolutely no extra cost to you! This helps us keep the content up to date, create new travel guides, and keep the website going. Thank you! ♥ For more information, see our disclosure here.