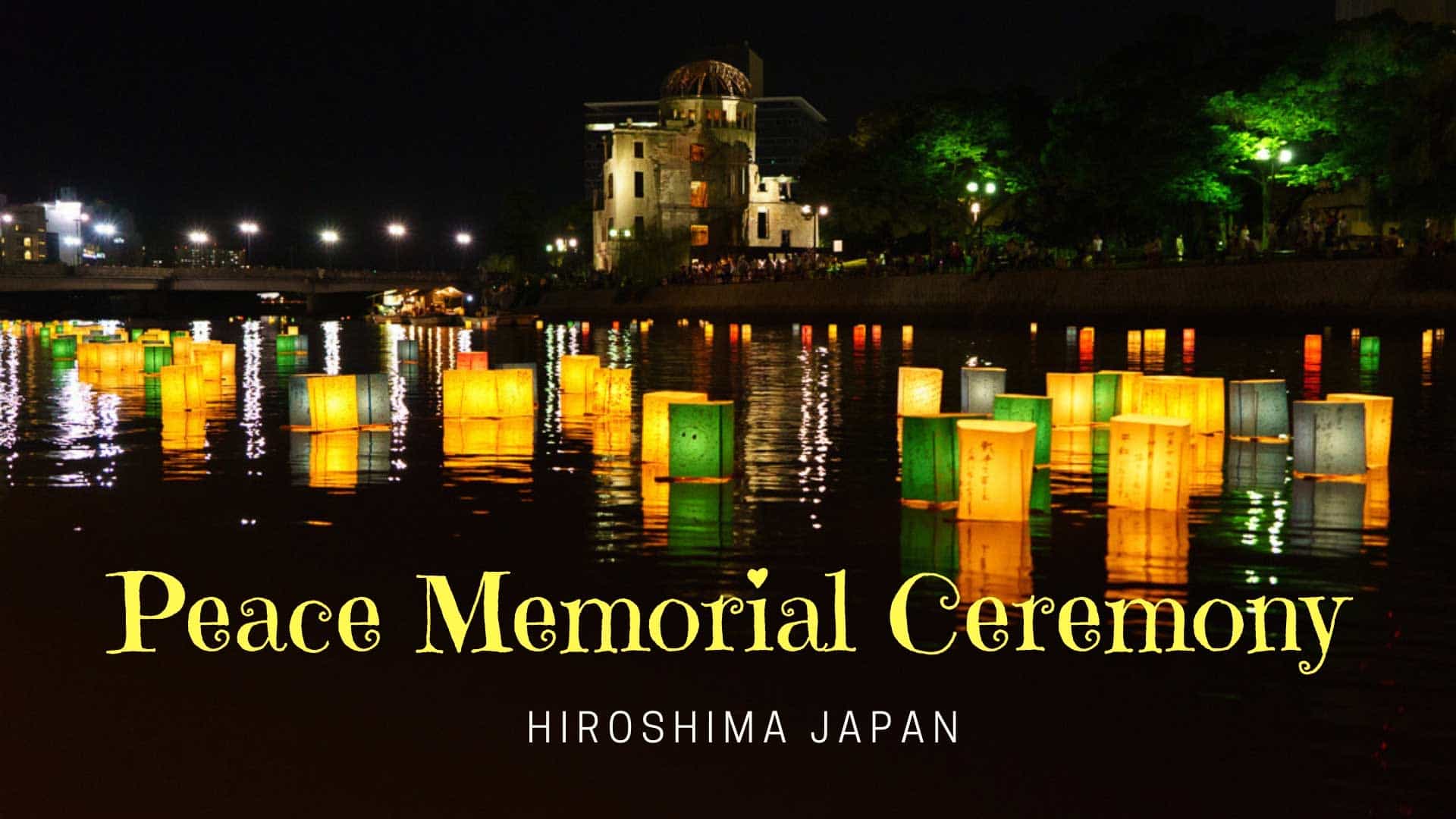 We had even before we went to Japan decided that Hiroshima would be on our itinerary on our Japan journey. Hiroshima is famous all over the world for its sad history of being the first city in the world that got hit by an atomic bomb.

And we did not regret it! The Peace Message Lantern Floating Ceremony with over 10 000 colorful paper lanterns floating peacefully down the river in the dark was breathtakingly stunning! ♥ It is a memory that I will remember for the rest of my life.

We came from Kyoto by train late in the late afternoon (after a 1 hour and 35 min train ride). We worried that we were too late for the Peace Message Lantern Floating Ceremony, but the guy in our hotel reception said that it did not start until after dark (around 7 p.m.), and lasted till around 9/10 p.m. So we put our bags into our room and rushed down to the Atomic Bomb Dome.

Here we give you our guide and experience of participating at the Hiroshima Peace Memorial Ceremony and the beautiful Peace Message Lantern Floating Ceremony.

A Brief History Of The Atomic Bombing Of Hiroshima

In December 1941, the Japanese Navy attacked the United States naval base at Pearl Harbor, Hawaii. It was a surprise military strike that led to the USA`s entry into World War II, and the start of the Pacific War.

On the early morning of the 6th of August 1945, the USA dropped the fatal atomic bomb over Hiroshima, as well as Nagasaki three days later. These two bombings were the first and remain the only use of nuclear weapons in warfare. Let`s hope it stays that way.

Within the first two to four months of the bombings, 90,000–166,000 people in Hiroshima and 60,000–80,000 in Nagasaki died. Roughly half of the deaths in each city occurred on the first day. During the following months, large numbers died from the effect of burns, radiation sickness, and other injuries. In both cities, most of the dead were civilians.

On August 15, 1945, just days after the bombing of Nagasaki, Japan announced its surrender.

Once we entered the park around the Atomic Bomb Dome, just after dark, we were met by thousands of lanterns beautifully decorated by the children of Hiroshima.

Walking around the Atomic Bomb Dome among all these Japanese people who probably had lost family members in the atomic bombing, we felt a sense of calm and humbleness. The atmosphere was dignified, sort of sad but at the same time filled with hope for the future.

It was like mother nature also wanted to participate and show her respect to the anniversary, showing us the full moon just above the Atomic Bomb Dome. It was the perfect setting, making the atmosphere even more special.

There were people everywhere, young and old, mostly Japanese but also a few Western. Even though it was crowded and we were walking in a stream of people, everybody was calm, walked slowly, and spoke with a low-toned voice. It really was a respectful and dignified atmosphere.

When we got to the Kyuota-gawa river, which runs through Hiroshima, we were met by a beautiful sight. Thousands of paper lanterns were floating peacefully down the river, for the souls of the dead. It was stunning!

You can even send off your own lantern if you want. You can buy a paper lantern (600 Yen = US$ 5) at the reception tent in the Peace Memorial Park from 6:00 am and write a message on it. Then show up at the riverbank of the Motoyasu River (on the other side of the river from the Atomic Bomb Dome) between 6 pm and 9 pm and send off your lantern.

It really was breathtaking! All those colorful lanterns with writing and drawings on them gliding calmly down the river while the moon was shining on the sky in all its glory. The atmosphere was kind of magical.

We are so happy that we scheduled our Japan trip so that we could join the Peace Memorial Ceremony. It truly was an unforgettable evening, that will stay with us forever. Hiroshima and its sad history will always be in our hearts, and we wish that no other city in the world will experience the same heartbreaking destiny.

Where To Stay In Hiroshima

We stayed at Sheraton Grand Hotel in Hiroshima and had a fantastic stay. It is a modern high-end hotel situated in a great location just opposite Hiroshima train station with plenty of transport, shopping, and dining options nearby. The rooms are large, bright, and well furnished with comfortable beds and all modern comforts. Breakfast has a good selection of both Japanese and Western food. The Wi-fi is free and fast. We would definitely stay here again.
Click for the latest prices

Rihga Royal Hotel Hiroshima
Rihga Royal hotel offers excellent value for money, and its location is fantastic for exploring Hiroshima. The Peace Memorial Park and the city’s buses are both within easy walking distance, and the views overlooking the beautiful Hiroshima Castle are spectacular. Rooms are spacious, well furnished, and comfortable with every modern amenities including free Wi-fi. Breakfast is excellent, and there is even a swimming pool!
Click for the latest prices

Candeo Hotels Hiroshima Hatchobori
Candeo Hotels is a new fresh hotel centrally located within walking distance of the Atomic Bomb Dome, Peace Memorial Park, and public transportation. Rooms are relatively small but tidy, clean, and comfortable. The staff speaks English and there is a lovely Onsen/hot bath on the roof perfect after a long day sightseeing.
Click for the latest prices

K’s House
K’s House operates hostels in a few cities across Japan, and we’ve always found them to be quite excellent, with friendly and helpful staff and clean and comfortable rooms. This one is thankfully no exception. The JR train station and a tram station are just a short walk away making it a great base from which to explore the city. There are both dormitory-style rooms, as well as western-style private rooms with bathrooms available.
Click for the latest prices

⇒ What To Do In Hiroshima – A 1-Day Hiroshima Itinerary

⇒ Where To Stay In Hiroshima – Our Favorite Hotels & Areas

I would recommend that you do a trip to Miyajima from Hiroshima. Read our articles about Miyajima Island:

⇒ What To Do In Miyajima – A 1-Day Miyajima Itinerary

⇒ A Journey To The Sacred Mount Misen – Miyajima Ropeway

Hiroshima is also a part of our recommended two-week Japan Itinerary.

FAQ About The Peace Memorial Ceremony

How To Get To Hiroshima

How To Get To The Peace Memorial Ceremony
From Hiroshima Station, take the Hiroshima electric tram and get off at Genbaku Dome-mae Station or Hon-Dori Station.

How Much Does It Cost To Attend The Hiroshima Peace Memorial Ceremony & Peace Message Lantern Floating Ceremony
The ceremony is free.

The Hiroshima Peace Message Lantern Floating Ceremony is held every year on the 6th of August from 6:00 pm to 8:30 pm on the Motoyasu River (near the Atomic Bomb Dome).

Both ceremonies are free and open to the public so anyone can attend.

PIN IT FOR LATER!
Hover over the picture below, and press the red “Save” button that pops up: 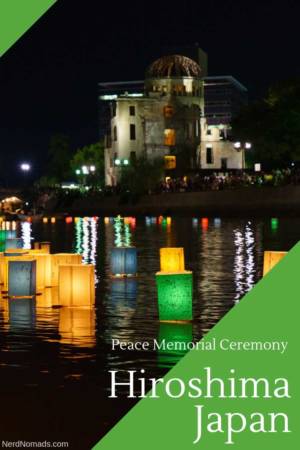 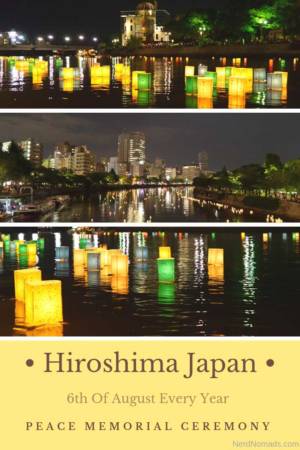 Have you ever been to a ceremony that made an impact on you? Please leave a comment in the comment area below. If you like this article and find it useful, please share it on social media. Thank you! 🙂

What is this article about