All You Need To Know About The Oktoberfest – Munich, Germany 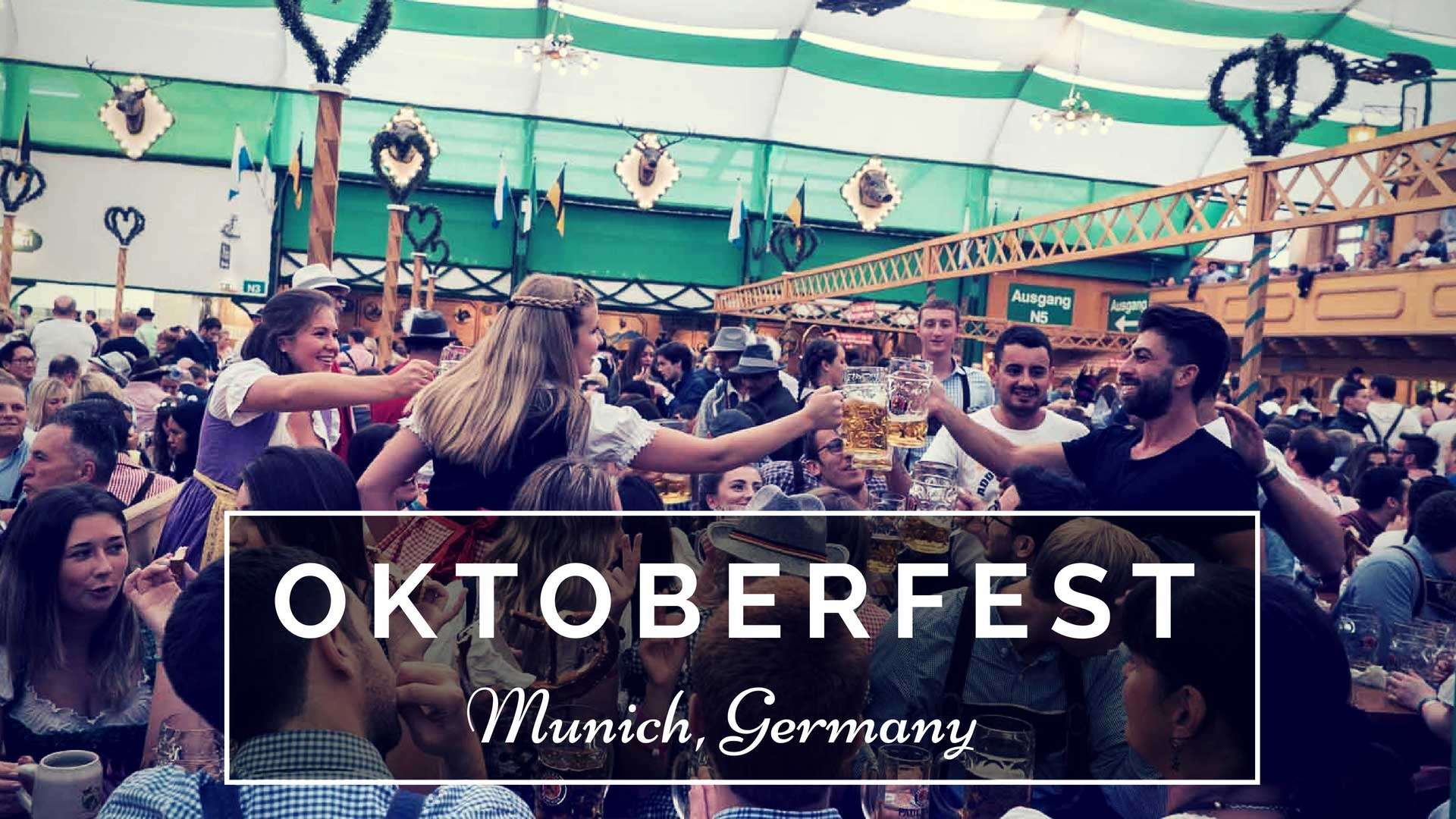 It ´s early Saturday morning, 10 o´clock, and I am sitting in a huge tent in the middle of Munich, Germany. Well, it`s more like a big hall than a tent, with walls covered with lovely paintings of ducks and landscapes. The tent is packed with people, people in beautiful traditional Bavarian clothes sitting on benches everywhere.

We can hear the rain pounding down on the plastic roof above our heads, and the air is damp and warm. There is a sense of excitement and expectation in the air. Every now and then the crowd breaks out in a spontaneous cheer. Everyone is waiting for the opening – the opening of Oktoberfest 2016!

Around 12 o´clock, the Oktoberfest parade enters the tent and the Mayor of Munich finally kicks a hole in the big beer keg that marks the official opening of Oktoberfest 2016.

Once the barrel has been tapped, we can all buy Oktoberfest beer. Yay, the wait is over and as the ompa ompa band begins playing, the party is on!

Oktoberfest is the world´s largest folk festival. It draws 6 million people from all over the world to Munich, Germany every year. It lasts 16-18 days from the middle of September to the first weekend of October. The festival leads up to the Germany Unity Day on the 3rd of October (public holiday), which celebrates the day that Germany was united in 1990 after the fall of the Berlin Wall.

The entry to the festival area and the beer tents are free.

The Oktoberfest is a beer festival, but also a gigantic amusement park where you can enjoy numerous attractions, such as amusement rides, games and stalls selling everything from candy, waffles, popcorn, Oktoberfest clothes, and souvenirs.

Unfortunately, the weather was terrible on this opening day of the festival. The rain was pouring down and it was windy, so riding the carousels were out of the question! Some of them looked like great fun, though.

The Oktoberfest was arranged for the first time 206 years ago, so it´s super old and is a very important part of the Bavarian (Bavaria = the south-east state of Germany) culture. 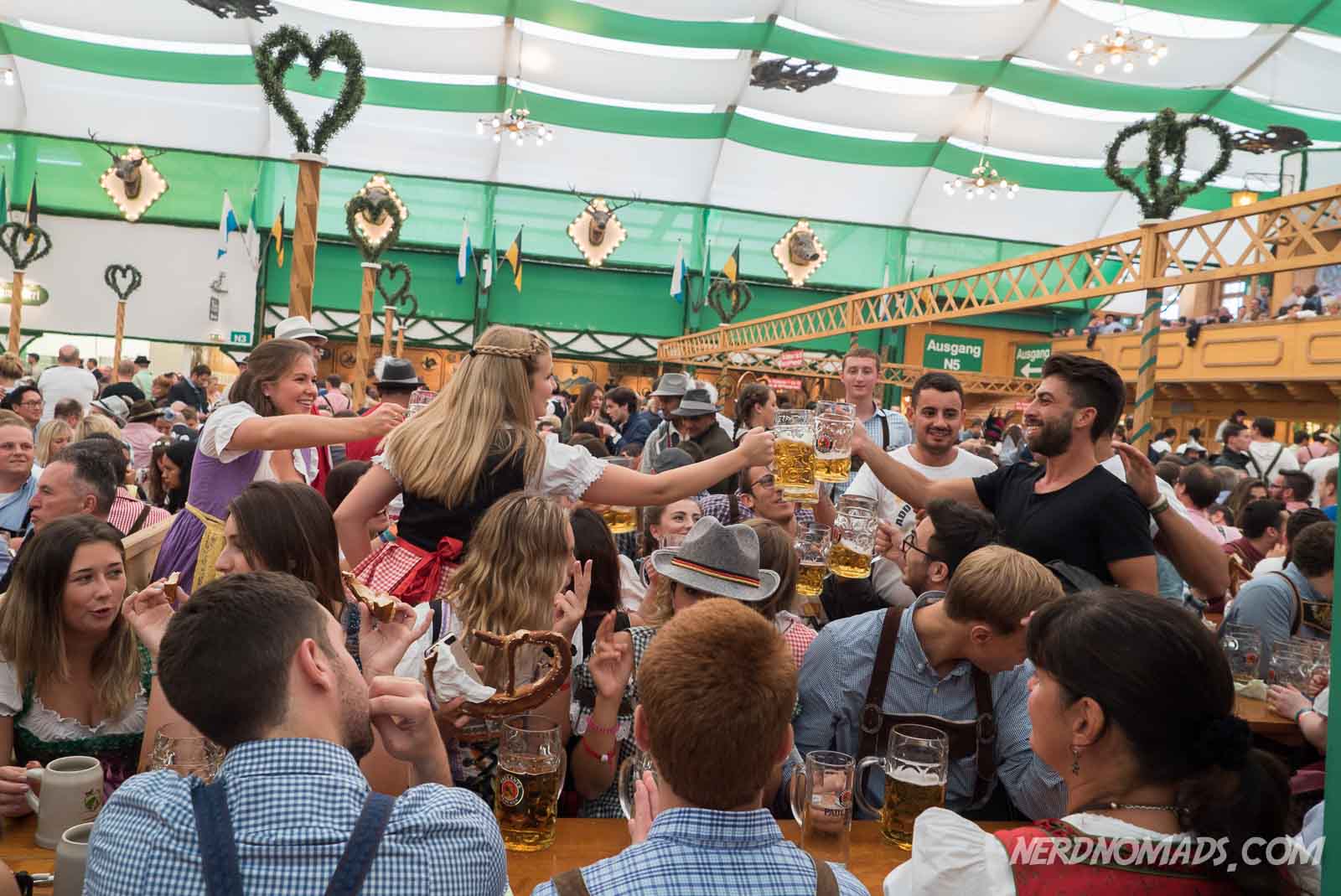 The History Of Oktoberfest

The Oktoberfest actually started as a wedding party. The locals call this festival “Wiesn”, named after “Theresienwiese” that is the grounds of which the festival is held at. The Theresienwiese area is huge, 420,000 square metres, and is named after Princess Therese of Saxe-Hildburghausen.

This area is where princess Therese of Saxe-Hildburghausen and crown prince Ludwig I had their big wedding October 12, 1810, inviting all the citizens to their wedding party. 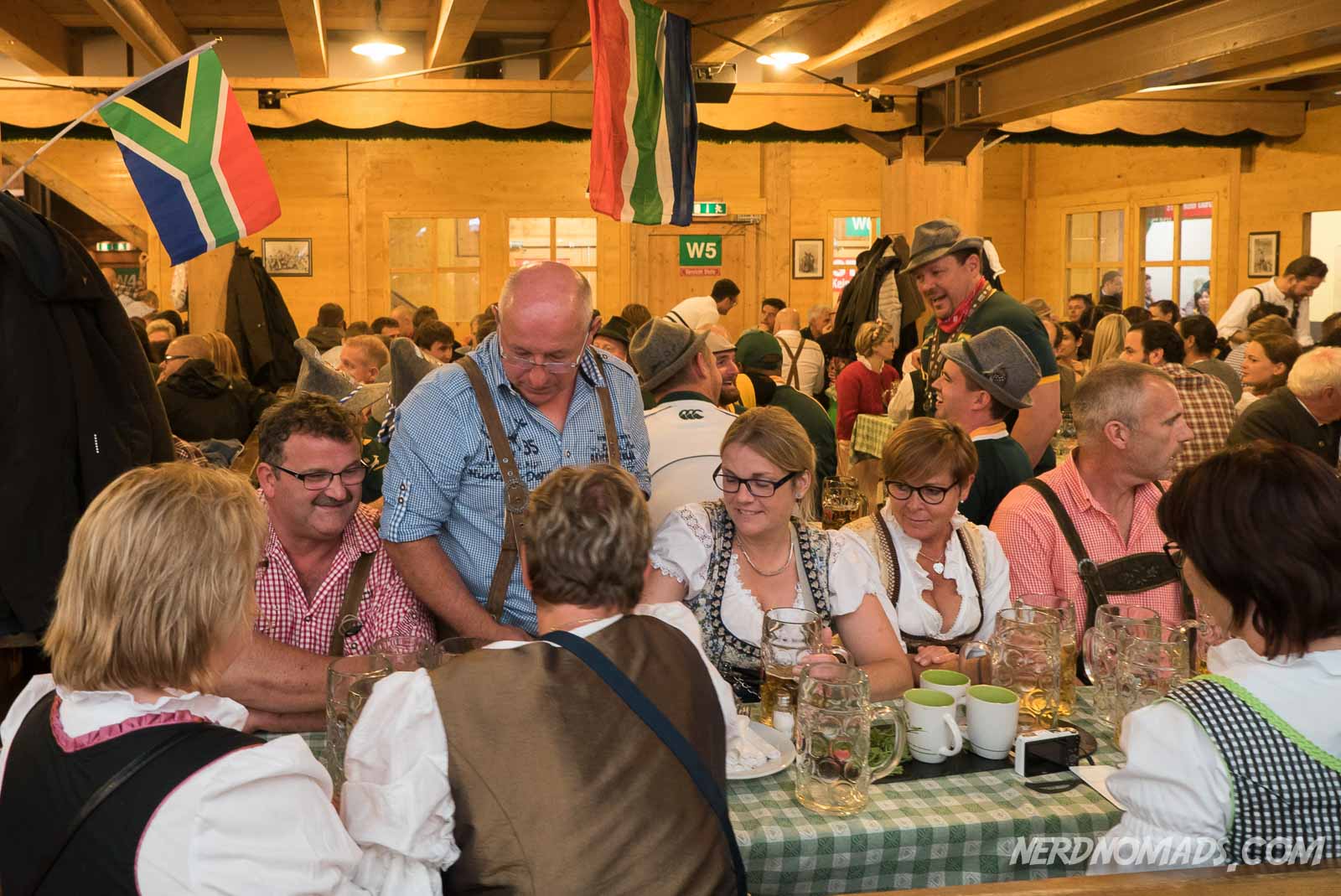 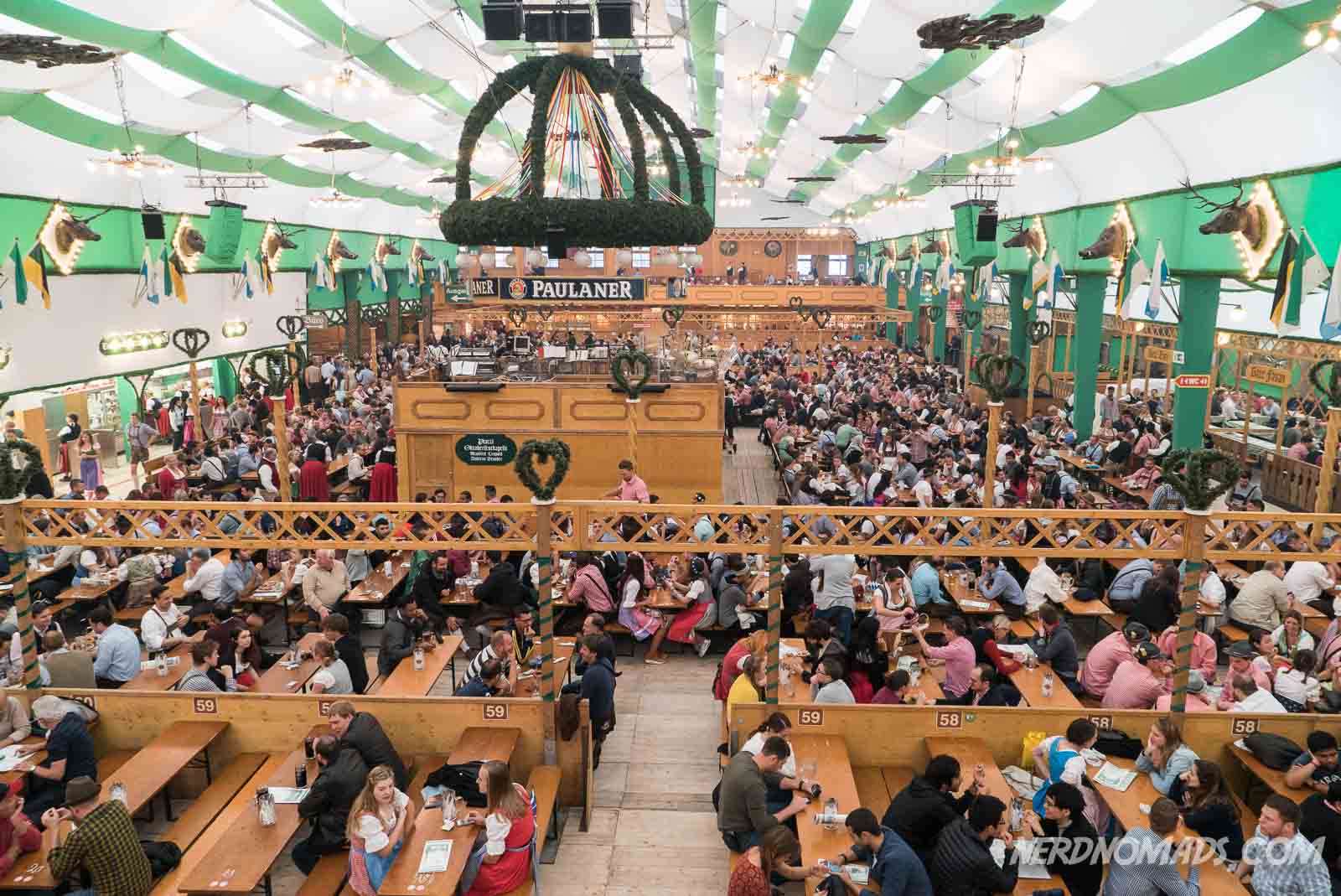 Since then, the Oktoberfest is celebrated here every year to commemorate their wedding. Pretty cool that a wedding led to this big festival 206 years later! It must have a been a very memorable wedding….

After we had found our seats in the Armbrustschützenzelt tent, I went out to go for a stroll and take a look at the area while waiting for the beer taps to open. I`m glad I did go outside, as around 11:30 a parade came through the Oktoberfest area. It was so much fun!

The people in the parade wore beautiful dirndl and lederhosen costumes and there was horses, music bands, flag wavers, and beautifully decorated carriages with beer kegs. Each brewery had their own horse and carriage.

The parade is very long too, with over 8000 participants marching the 7 km stretch from Munich centre to the festival grounds. It reminded me of the parade we have all over Norway on the independence day 17th of May. Very nice, and I would say a highlight of the festival! 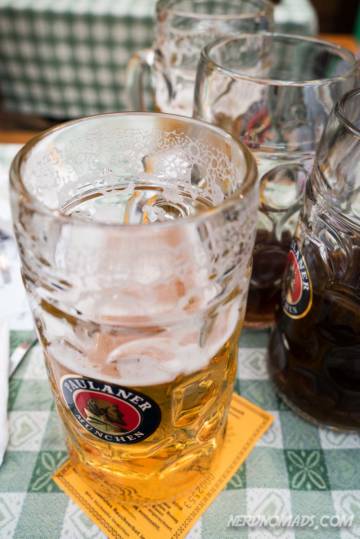 There is even a special Oktoberfest beer that has been served at the festival since 1818.

“Oktoberfestbier” is actually a registered trademark of the big six Munich breweries, who call themselves the Club of Munich Brewers: Spaten, Löwenbräu, Augustiner-Bräu, Hofbräu-München, Paulaner and Hacker-Pschorr. 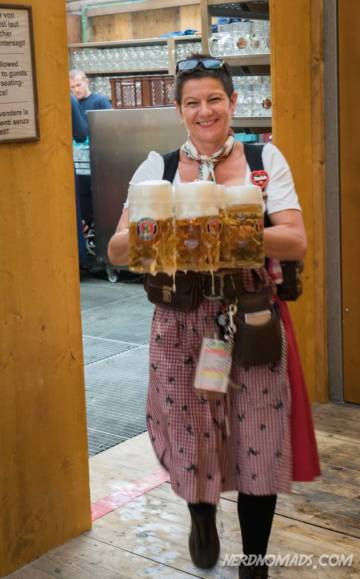 The Oktoberfest beer is served in 1 litres glasses, and I witnessed the waitresses carry up to 12 glasses at the same time! Pretty impressive! I struggled with lifting my one glass, as it was surprisingly heavy.

During the festival, around 8 million litres of Oktoberfest beer are consumed! Yep, it´s a pretty big party!

But even though people drink a lot of beer, people were not drunk; it just seemed that everyone was having a great time talking and singing. There are families with children joining the festival too, children under six years old must leave the tents before 20 o´clock (8 p.m.).

At the festival you can buy a wide variety of traditional German foods, like: 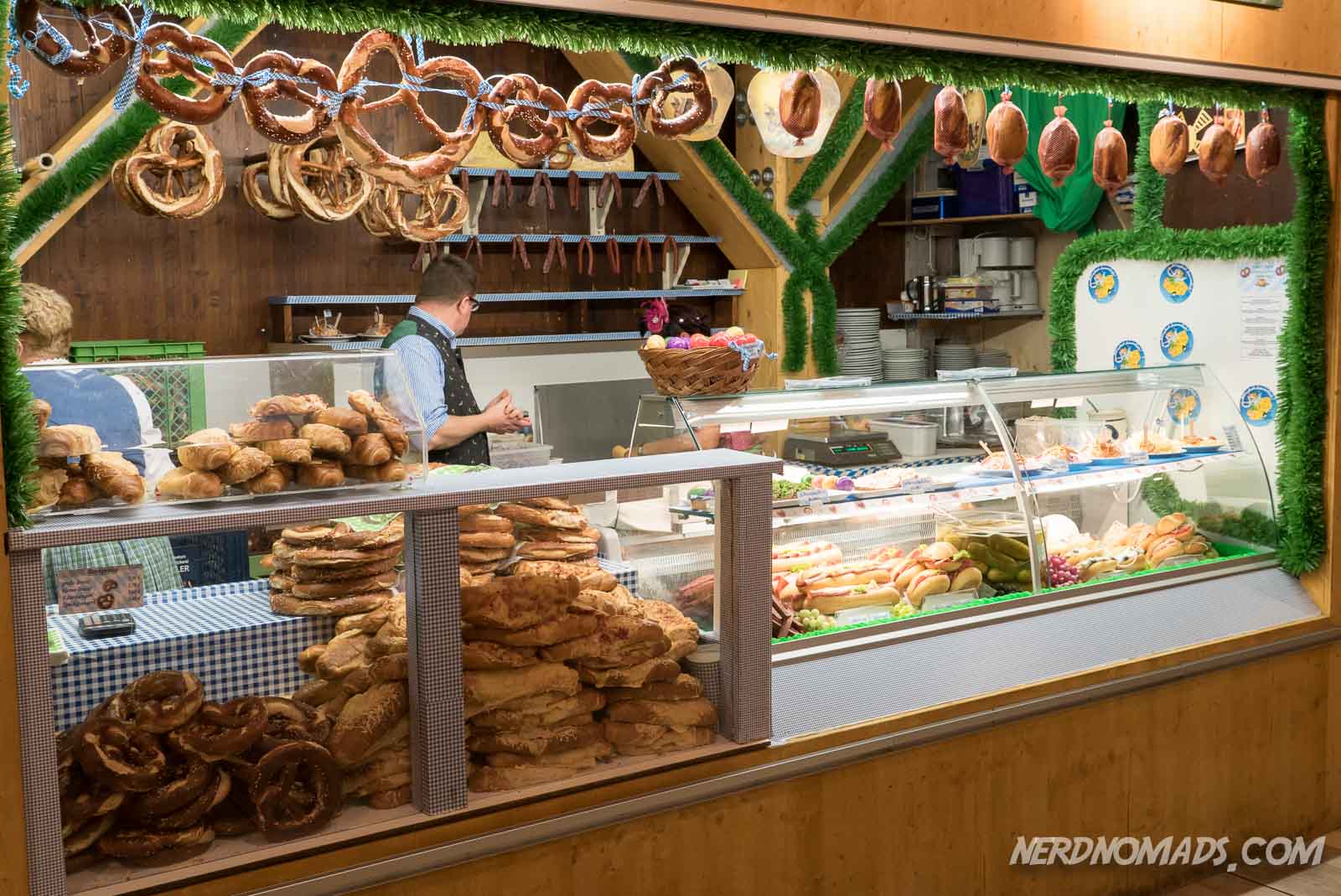 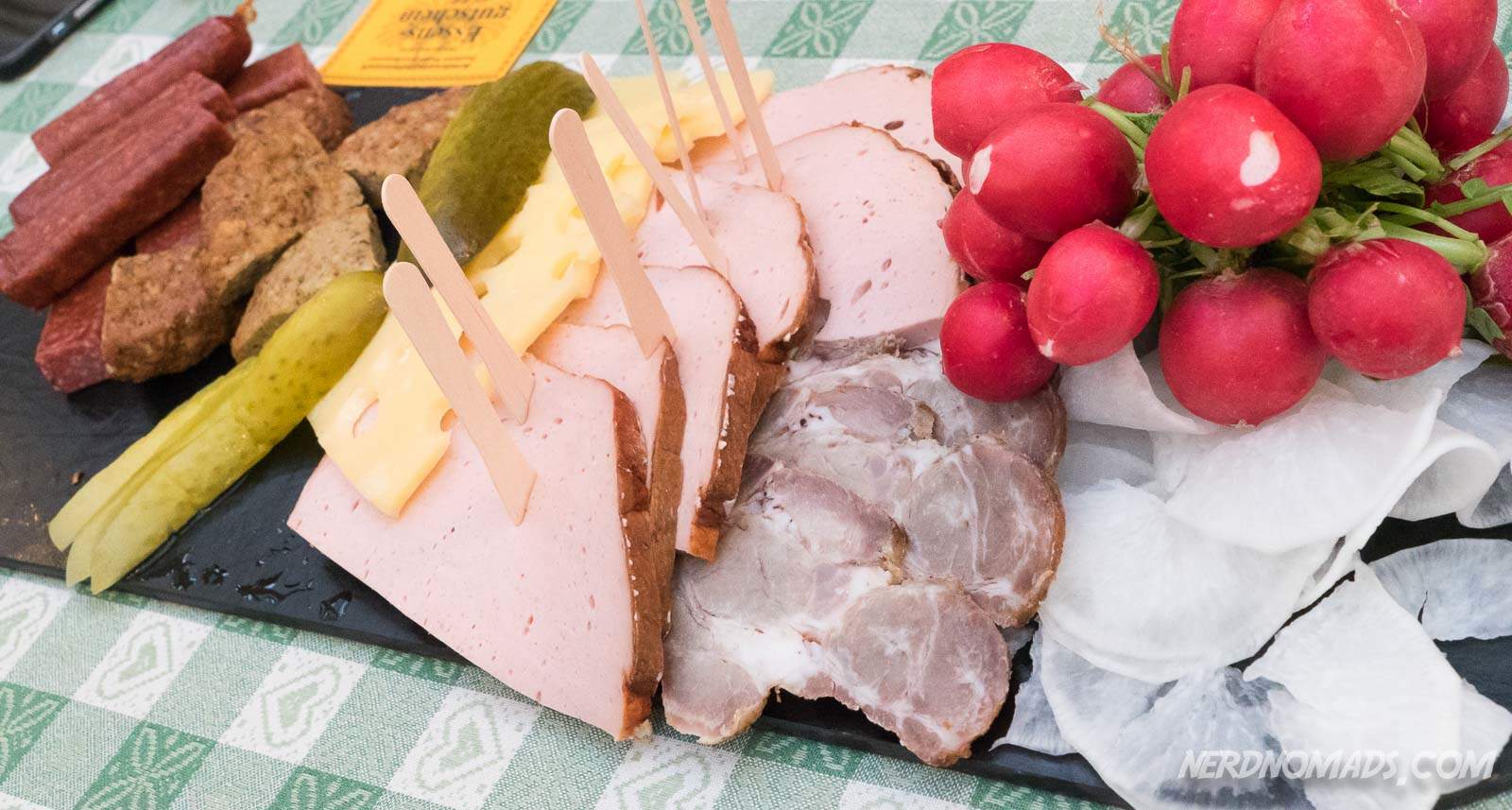 I tried the snacks platter (containing different cheeses, sausages and radish), the roasted chicken and the Apfelstrudel (apple cake), and they tasted delicious!

Inside the tents, there are Pretzel sellers walking around with big baskets packed with pretzels. So all you have to do is to put your hand in the air or wave at a pretzel seller, and voila you have a delicious freshly baked pretzel to go with your beer. 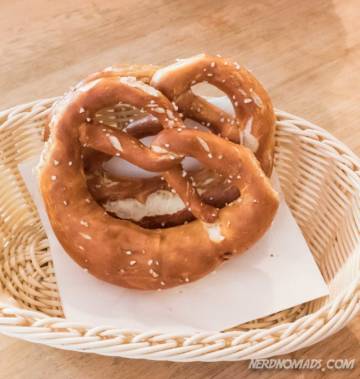 MMmmmmm…….I really like the bavarian pretzel! They are sold all over Munich, very convenient for a pretzel-lover like me. 🙂

There are 14 beer tents in the Oktoberfest area, each with seating areas and an ompa ompa band in the middle playing traditional German songs but also modern German pop songs.

There is no fee to enter the beer tents, and the seats in the middle of the tent are free. You can enter the tents without a reservation, but you should get there early, as the tents fill up pretty quickly and when a tent is full no more people are allowed inside.

In weekends the tents are usually full by 11 o´clock, while they don´t get full until late afternoon during weekdays.

We had, however, made a reservation in the Armbrustschützenzelt tent (Paulaner brewery), from 10:00 – 15:00. To make a reservation in a beer tent, you have to contact the respective beer tent. You can get an overview of the tents, and contact information here.

The Dirndl comes in many different colours and styles, and the Dirndl trends vary from year to year. Some are really expensive and well-made, while you can find cheap tourist versions as well. The dress can be long or short.

If you are looking for a flirt, you should look for girls having the belt knot (bow tie) to their left side of the waist, which means they are single. The bow tie in the middle of the waist means she is a virgin while having the bow tie to her right side means that she is married or in a relationship. Good luck! 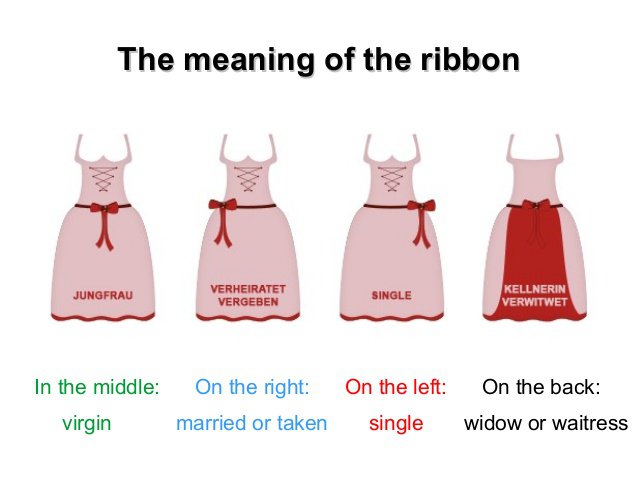 Also for the lederhosen, there are long and short versions. I also saw some girls wearing lederhosen, and, actually, a guy wearing a Dirndl! 🙂

I really wanted to buy a Dirndl, but the nice ones were a bit too expensive. Plus, when can I wear it, other than at the Oktoberfest, hmm. I do have a traditional Norwegian dress, called a Bunad, which I love. So I think I`m good.

A popular thing that also belongs to the Oktoberfest is the gingerbread heart! This is a beautifully decorated gingerbread in the shape of a heart (it can be big or small) with text written on it.

This is both for decoration and to give to people you love or are fond of. It reminds me a bit of Valentine actually. You will see these hearts everywhere. The perfect Oktoberfest souvenir!

I really had a great time at the Oktoberfest in Munich! It was great fun to be a part of it at the original birthplace of this festival, although I have been to other Oktoberfests around the world.

The proper beer cheer at Oktoberfest is to shout: “Eins, Zwei, Drei g`Soffa!!!” (meaning “one, two, three, cheers!”). So you should start practising. 🙂

Have you been to Oktoberfest somewhere in the world? How was it? Do you have any tips to newbies heading to Oktoberfest for the first time? Please leave a comment in the comment area below. Thanks!

This year (2016) they stepped up the security at Oktoberfest with security checks at all the 11 access points into the festival area. A new security regulation is that you are not allowed to bring any backpacks, day packs or bags with a volume exceeding 3 litres or 20x15x10 cm in size. Also, no bottles, knives, spray cans or any kind of sharp or blunt weapons are allowed.

How To Get To The Oktoberfest

The best way to get to the Oktoberfest area is to walk, grab a taxi or take the public transport. Do not even think about taking a car! There are no parking places.

PIN IT FOR LATER!
Hoover over the pictures below and press the green PIN IT button that pops up: 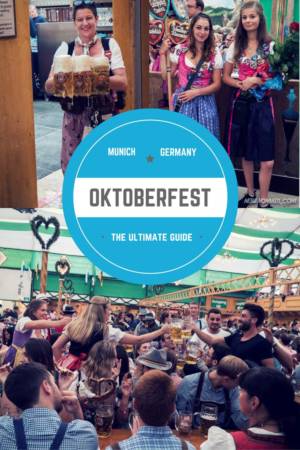 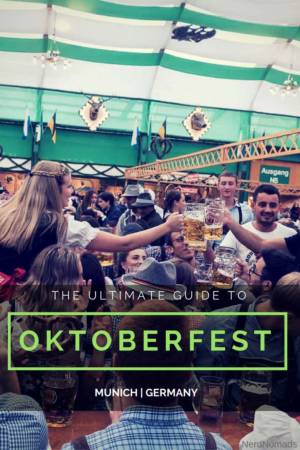