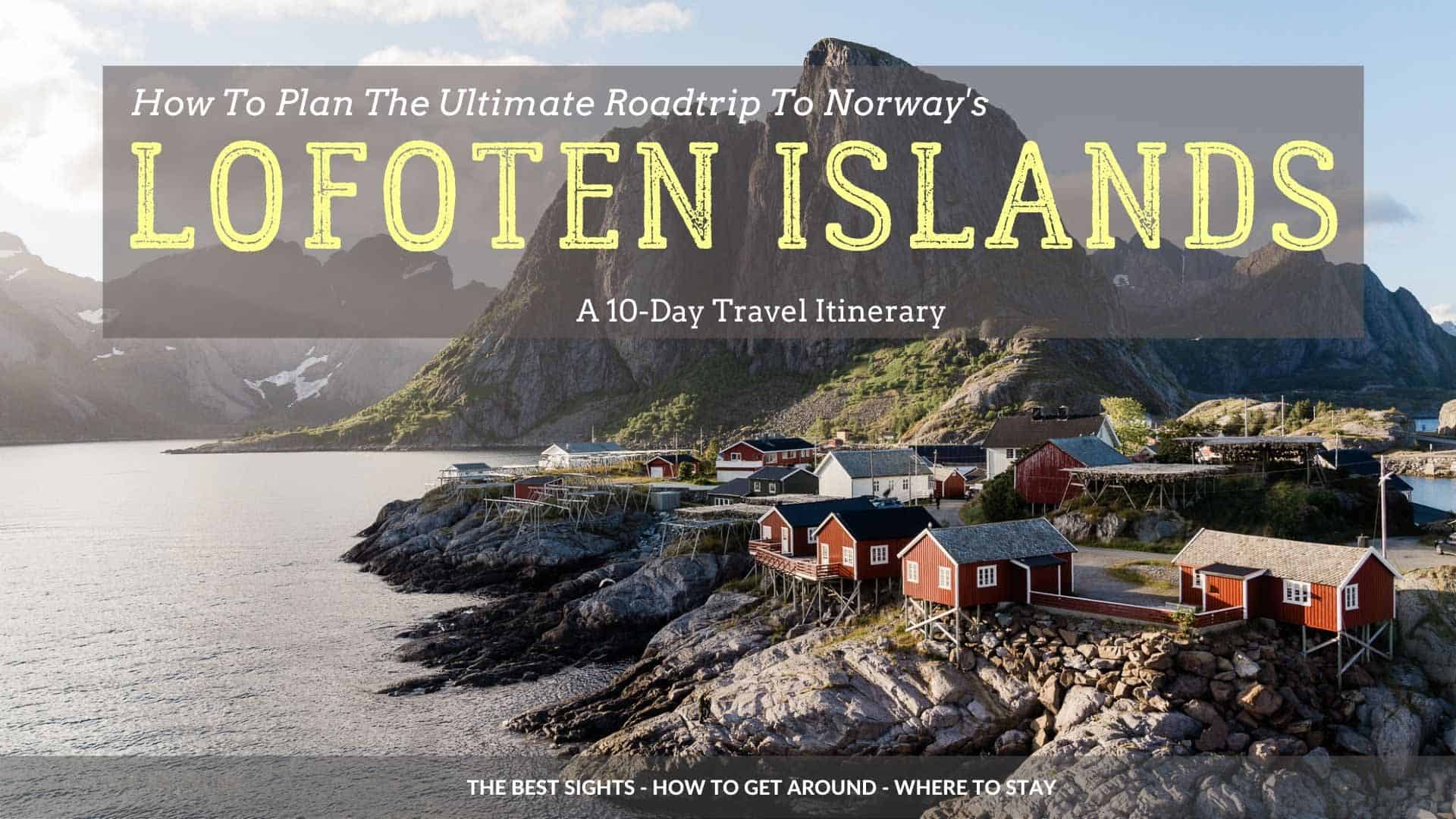 It’s no wonder that the Lofoten Islands is often described as one of the world’s most beautiful landscapes. It truly is spectacular! Lofoten is a nature lover’s dream destination with tall peaky mountains going straight down into the fjords lined with white-sandy beaches and the shoreline dotted with picturesque red fishermen’s cabins.

Not only is the landscape stunning, but add in Northern Lights (from September to April) and Midnight Sun (from May to July), and you can hardly find anywhere with a more excellent photo opportunity. Who would have thought you would find the number 1 ranked beach in Europe (by Lonely Planet) in Lofoten – Haukland Beach.

The Lofoten archipelago consists of seven islands connected by bridges and tunnels and is the perfect place for a road trip. Everything is within easy reach, and in fact, you can drive from the northern end of Lofoten (Svolvær) to the southern end (Å) in just a few hours. And yet you could spend weeks exploring the small villages, hiking in the mountains, surfing, or simply relaxing on Norway’s finest white sandy beaches.

Lofoten is all about outdoor adventures, and it is an eldorado for hiking, kayaking, fishing, climbing, skiing, biking, surfing, and kitesurfing. So why not try surfing in the Arctic Sea under the Northern Lights or horseback riding along a white-sandy beach in the Midnight Sun.

And if you are not the sporty type, you will find several excellent museums (the Lofotr Viking Museum is fabulous), art galleries, historic regions, and craft shops in Lofoten. A cruise to Trollfjord is also a must when visiting Lofoten.

Lofoten has some of Norway’s best hiking with mountains that give you spectacular panoramic views. On two of Lofoten’s mountains, Sherpas from Nepal have built stone steps to the top – the mountain Djevelporten (420 m tall) in Svolvær and the mountain Reinebringen in Reine (448 m tall).

Lofoten has so much to offer and has something for everyone. Read our ultimate Lofoten Guide for a complete overview of the Lofoten Islands with everything you need to know to have a fantastic Lofoten adventure.

Lofoten Islands Itinerary
– The Best Of Lofoten In 10 Days

Here we give you what we think is the best Lofoten itinerary with all the highlights and attractions these arctic islands have to offer. On this 10 day Lofoten Island road trip I hope you have an amazing ten days in Lofoten. We hope you find it helpful when planning your trip to the Lofoten Islands! ♥

What To Do In The Lofoten Islands – The 15 Top Places

Our recommended Lofoten itinerary takes you to what we think are the 15 best places to see in the Lofoten Islands. You will cover Lofoten from its eastern-most city Svolvær, to the road’s endpoint – Å. A total drive of 230 km (143 miles).

You can do the drive from Svolvær to Å in just a few hours, but that would obviously be pretty pointless. You will, of course, want to stop and visit the sights and attractions. We think this itinerary is best done over ten days, but it can easily be expanded or reduced to suit your trip.

Lofoten is best explored by car as public transport is minimal. There are no trains and only a few buses that often just run one or two times a day. If you wonder where and how to find a rental car in Lofoten, you can find rental car prices and deals here (rentalcars.com), which compare prices from the biggest rental car firms like Hertz and Avis.

Feel free to adjust this itinerary to match your number of days and interests. Leave a comment in the comment area (at the end of this article) if you have any questions about this itinerary. We’d love to help you find your ultimate Lofoten itinerary. ♥

When To Go To Lofoten

This Lofoten itinerary can be done the whole year round, both summer and winter. Just be aware that some of these hikes are not recommended during the winter when it’s snow and ice in the mountains.

As Lofoten has all four seasons, the time of year you choose to visit these islands determines what you will see and do.

You can see the Northern lights in Lofoten from mid-August until mid-April. However, you need a bit of luck, as the Northern Lights do not show up every night, plus you have to have a clear sky to see it. Since Lofoten is relatively small with short distances, you can easily drive to a place with a clear sky. Plus, Lofoten has a mild coastal climate during the winter (the trrage temperature in winter/ December – March is 0 C), so you don’t have to freeze your fingers off watching and photographing the Northern Lights.

The cod season is a big thing in Lofoten and is on from January until April. This is because the migrating cod (called skrei in Norwegian) flocks to the sea outside of Lofoten to spawn. The cod can weigh up to 55 kilos and be as long as 180 cm!

These winter months, called Lofotfiske in Norwegian, are the perfect time to go fishing in Lofoten, eat fresh cod, and try the local dishes “Mølje” (boiled cod with liver and roe) and fried cod tongues.

You can see the Midnight Sun in Lofoten from 27. May until 17. July. In this summer months, the sun never sets, and the Lofoten landscape can be seen the whole night in a beautiful golden light. You can go hiking, kayaking, surfing, sailing, fishing, and photographing 24/7. It is our favorite time of the year to visit Lofoten.

So bring your camera and phone, pack a thermos with some warm tea, coffee, or hot chocolate and some snacks, and set out to one of the beaches above to enjoy the Midnight Sun.

How To Get Around Lofoten

This Lofoten itinerary is best done by car. You can also go around Lofoten on a bicycle, but it will, of course, take longer. There are no trains in Lofoten and only a few buses, so you will have difficulty getting around to all these places in Lofoten by bus.

I highly recommend that you rent a car to explore the Lofoten Islands. Check out availability and the latest prices on rental cars here.

There are parking lots in most places in Lofoten, so finding a parking space is usually relatively easy (although you have to pay). All hotels and rorbu accommodation in Lofoten have free parking.

In the wintertime, the rental cars will have winter tires with spikes. So driving around in Lofoten during winter is no problem. However, during the high season summer months (June, July, and August), the rental cars in Lofoten sell out pretty quickly, so make sure to pre-book your rental car in advance.

Lofoten islands is a relatively small and compact area. You can, for instance, drive from Svolvær (the starting point of Lofoten) to the endpoint of Lofoten (a place called Å) in only 2,5 hours non-stop. Be aware, however, that some of the roads in Lofoten are pretty narrow. Just drive slowly, especially during wintertime, and you will be fine.

A few buses are going between the main places in Lofoten. You can check the timetables and bus routes here (reisnordland.no).

That’s it, our ultimate Lofoten itinerary, which we recommend that you do over ten days. You can do this itinerary in lesser time (you probably have to cut something) or, of course, over more days. This itinerary gives you the best places and all the highlights of Lofoten.

⇒ Read next our other articles about Lofoten:

PIN IT FOR LATER!
Hover over the images below, and press the red “Save” button that pops up:

Do you plan on heading to Lofoten? Which places do you look forward to seeing the most? We would love to hear from you in the comment area below. If you like this article and find it useful, please share it on social media. Thanks! 🙂