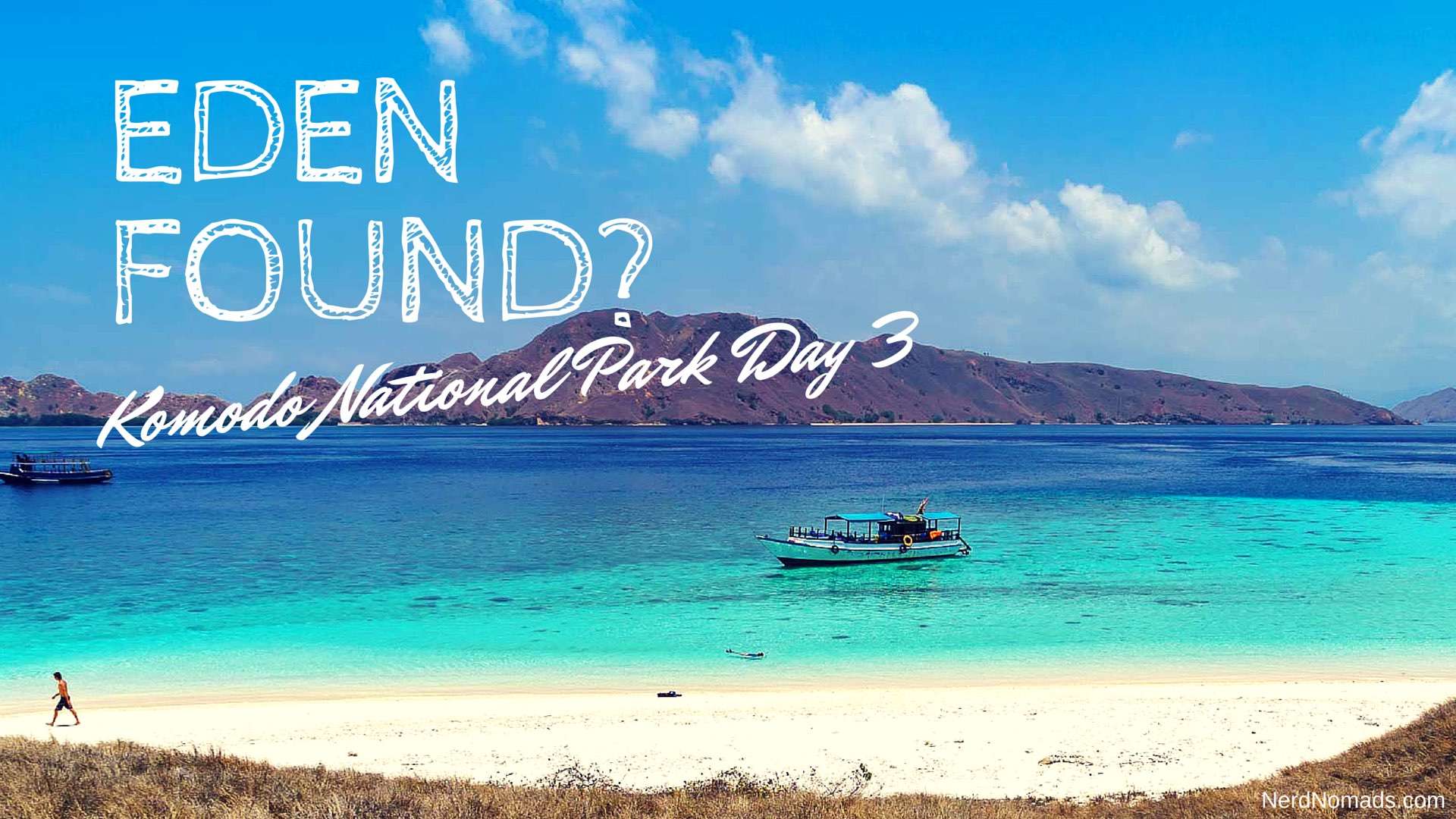 We simply L-O-V-E-D the first day of the Komodo tour, packed with adventurous things such as a visit to a pearl farm, a mountain trip on a deserted island and lots and lots of fabulous snorkeling in the hot, clear and turquoise water.

Day two was even better, with the ultimate highlights being walking among Komodo dragons at Komodo Island and swimming with huge gracious manta rays.

With all these spectacular experiences already in the past, we were a bit worried that the last day would be a disappointment compared to the other two. But we did not have to worry, as day 3 turned out to be just as good and eventful as the previous two!

In Search Of Komodo Dragons On Rinca Island

Our first stop was at Rinca Island, one of only five islands in the world where the Komodo Dragons live, all in Indonesia. Rinca is less known and less visited than Komodo Island, which makes it a good place to see the Komodo dragon in its natural environment. There were definitely fewer people here than on Komodo Island.

Rinca is a smaller island than Komodo, so we only had to do a short walk until we saw the first Komodo dragon, a female called Jessica watching over her eggs.

A female Komodo dragon lays approximately 20 eggs from August to September and digs a big hole where she puts them.

To prevent other dragons from eating her eggs, she uses a camouflage technique where she digs several nests/holes in the area around her actual nest. That way her enemies do not know in which hole the eggs are. Clever! The incubator time for the eggs is 7-8 months, in which she guards her eggs constantly. 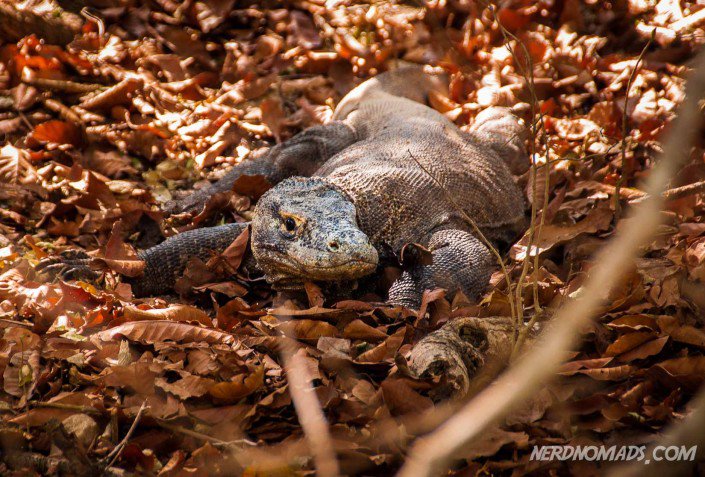 We did not only see Komodo dragons, but also several water buffaloes like these two fellows:

Before coming ashore Rinca we had heard that we were almost certain to meet Komodo dragons around the kitchen building in the camp area. And it turned out to be true, the kitchen was obviously very popular among the dragons! At the time we visited, there were six dragons under and in front of the kitchen building. 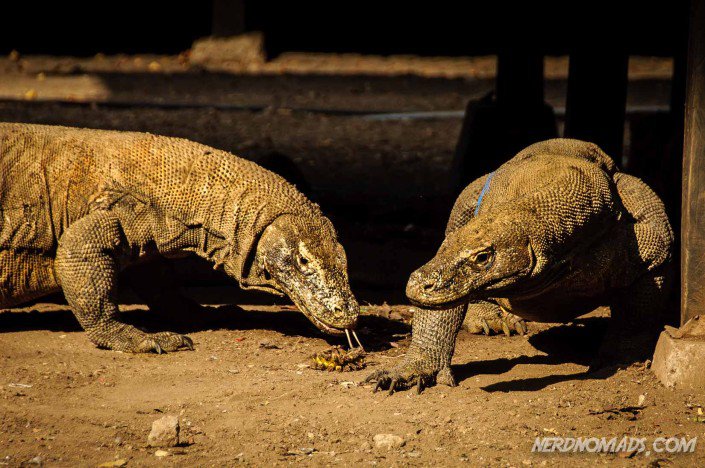 The reason for this “colony” of dragons under the kitchen building is of course that the kitchen staff throws out leftovers for the dragons to eat. They are not stupid, of course, they say “yes thank you” to free and easy food….

On our way back to the pier, we noticed a crowd of people cheering and shouting, standing in a big circle. It turned out that a small baby dragon had climbed down from a tree and onto the ground. It was now together with a big grown-up looking very hungry….

Therefore the babies and young dragons spend most of their first years up in the trees to avoid being eaten. On average, it takes a dragon three to five years to mature (and start living on the ground…). Komodo dragons may live up to 50 years.

Luckily this little fellow did not get eaten, well at least not while we were there, so hopefully, he lives happily ever after…..

Have you seen the James Bond film “Skyfall” from 2012? Here one of the Chinese henchmen in the casino that Bond visits in Macau is attacked dragged off and most likely killed by a Komodo dragon:[clear_floats] 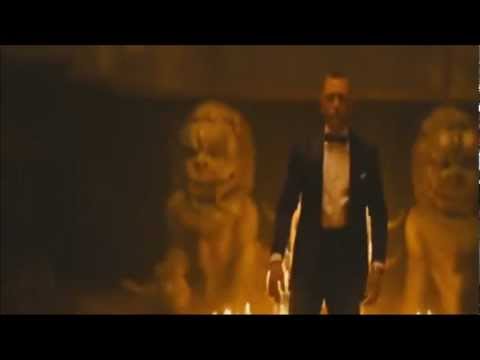 After all this walking and excitement of watching the Komodo dragons on Rinca, it was time to head out to the sea again and go for a refreshing dip and some snorkeling.

Salacia took us out to this beautiful deserted island called Mawan Island. The water was incredibly clear, turquoise and warm! It is impossible to explain it`s beauty in words, so I`m just going to show you the pictures of how nice it was…… 🙂

Can it get any better? Ah, a true paradise! I so want to build a small hut right on this beach and live there forever….. *dreaming* 🙂 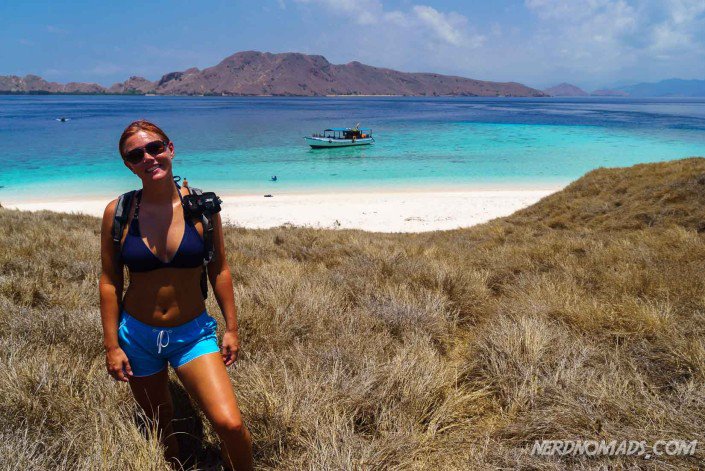 From pristine empty beaches, we headed to a local gypsy fisherman village on one of the islands of Komodo National Park.

Check out this beautiful smiling welcome committee that greeted us as we approached the harbor:

As we went ashore the kids almost “attacked” us, and all of sudden I got myself a new best friend.

She was just the cutest, and the only English words she knew was “best friend”, “hi” and “bye”.

The kids were adorable, very friendly and giggling and wanted to show off by dancing and jumping in the sea.

They did not speak a single English word, and unfortunately, we don`t speak any Indonesian. It is amazing how well one can communicate through hand signals and smiles though.

It was actually a bit difficult and sad to say goodbye to these kids. It was great to see how happy they are, even though they don`t have all the material goods that western kids have or nearly as many toys, video games, tv shows, internet or cinema. They were constantly smiling, playing around and in many ways seemed happier than western children. I think many western kids will benefit and learn a thing or two from a visit to this small village.

As the day faded into dawn, we anchored up by a tiny island called Kalong Island, made of mangrove swamps and watched the sunset. Oh boy, it was a stunning sunset! 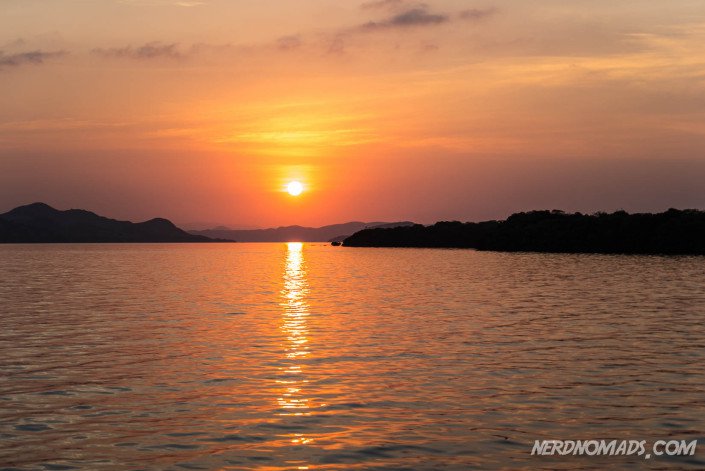 Shortly after the sun had set, we started to hear some movements in the mangrove bushes, and all of a sudden thousands and thousands of giant bats or flying foxes started to fly over our heads!

It was amazing, everything from seeing them as a black contrast against the bright blue, yellow and pink sky to hearing the sound of their flapping wings! I never thought that I would ever say that bats are beautiful….but they really are.  I ♥ bats, at least from a distance. 🙂 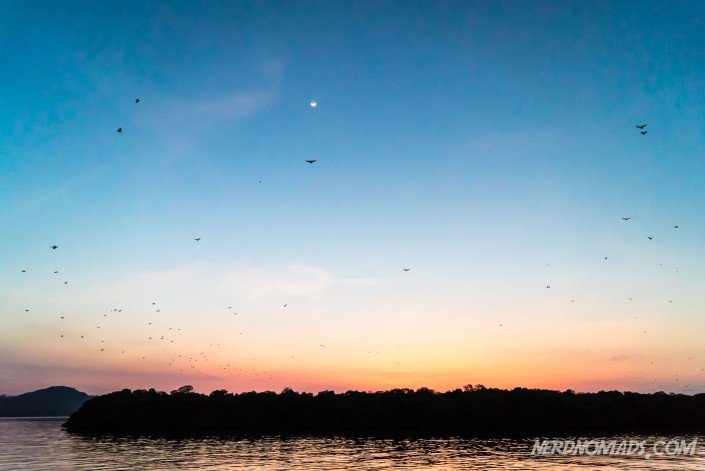 The flying foxes fly to Flores mainland to feast on fresh fruit during the night and head back to the mangrove when the sun rises. 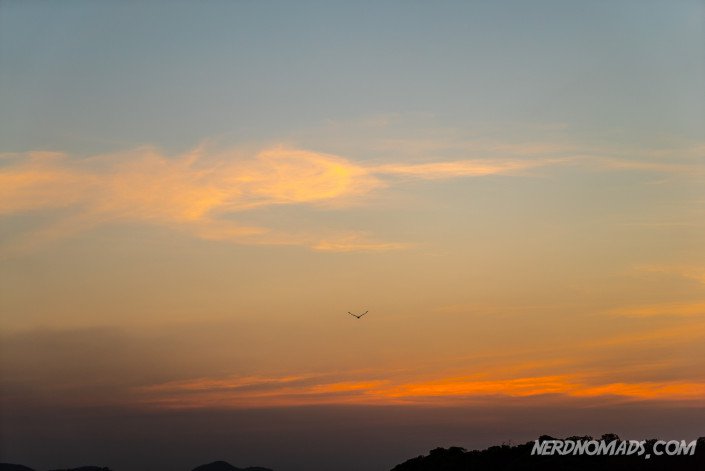 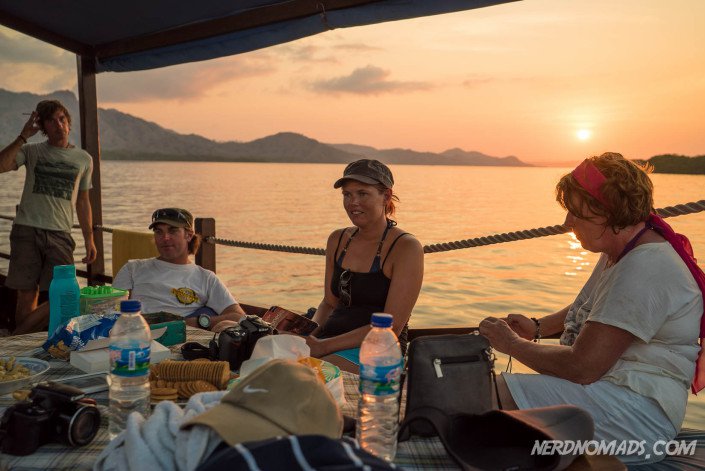 Sitting there on the Salacia boat with some of the nicest people we have met during our travels in Indonesia, admiring the most stunning sunset and hearing thousands of bats flying over our heads – it was just the perfect end to our three day Komodo National Park adventure.

Oh boy, what an adventure it has been! Everything from visiting a pearl farm, swimming with mantas, seeing the amazing Komodo dragons to meeting the lovely people in a local fishing village, admiring the most spectacular sunset after the other, sleeping in beds on the beach under million of stars and shooting stars, snorkeling in crystal clear water and walking on sand soft and white as flour…..we could not have picked a better tour to Komodo National Park.

We got to experience all that Komodo National Park has to offer, and even more than we expected! As we stepped ashore on the pier of Labuan Bajo, we felt a bit sad that this adventure was over and just wanted to turn around and take the three-day tour again…….

So long Komodo National Park! To slightly misquote the mighty Arnold Swartznegger in Terminator: “We`ll be back!” 🙂

Where To Stay In Komodo National Park

Most visitors to the Komodo National Park spend a couple of days in Labuan Bajo arranging their tour. Labuan Bajo is a small village but offers a wide selection of accommodation for all budgets, and you will have plenty of choices when it comes to finding the right place to stay. Accommodation prices do vary greatly with the season. We stayed in Labuan Bajo at the end of October, so peak season had not yet started.

Below are some of the best accommodation options in Komodo National Park and Labuan Bajo city:

We stayed at Laprima Hotel in Labuan Bajo before and after our three-day boat trip with Flores XP and had an excellent stay.

This hotel has one of the best locations in Labuan Bajo, right by the sea and away from all the hustle and bustle in the main village. It is however within walking distance to the main street of the village. The hotel has a top-notch swimming pool right by the sea, which we loved! Gorgeous view from the room, with the most stunning sunsets.

The food is not the best, however, but there are plenty of nice restaurants on the main street so we mostly ate there. They have ok wifi both in the rooms, restaurant, and reception. 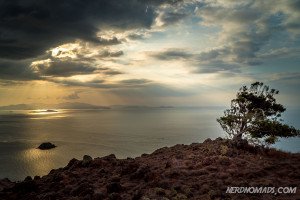 This place looks like paradise! It gets a very high score on TripAdvisor and looks fantastic. This is the place we`ll be staying at on our next trip to Komodo National Park, no doubt.

It is located on the same island as we slept on, Sebayur Island, although we slept in tents on the other side of the island. It is a beautiful island.

We wanted to stay at this hotel in Labuan Bajo, but it was unfortunately fully booked while we were there. It looks lovely, with an amazing view and a great swimming pool. It is beautifully located on a small hilltop surrounded by a nice garden.

This is a fairly new hotel, only three years old and looks really nice. It is beautifully located in a garden right by the sea, and the swimming pool looks heaven! It is further away from the main center of Labuan Bajo than Laprima Hotel where we stayed, however the hotel has a free shuttle into town.

This is also beautifully located by the sea with a lovely swimming pool.

Here are some great books to read up on before heading to Komodo National Park. Click the images and you will be taken to Amazon.com (affiliate links):

Would you like to visit Komodo National Park? Have you been to any cool national parks? Where and how was it? Please leave a comment in the comment area below. If you enjoyed reading this post, please share it on social media. Thanks! 🙂

PIN IT FOR LATER!
Hoover over the pictures below to pin 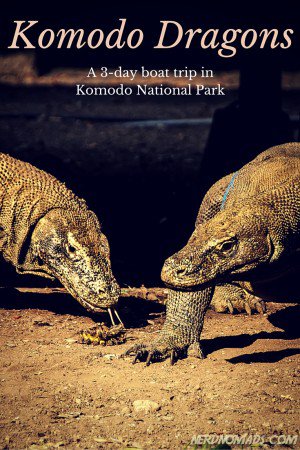 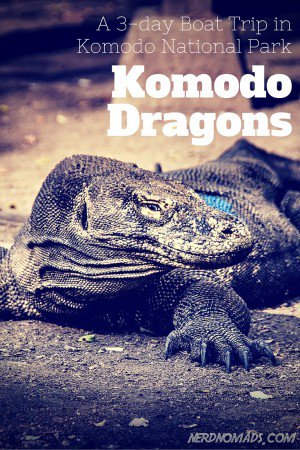 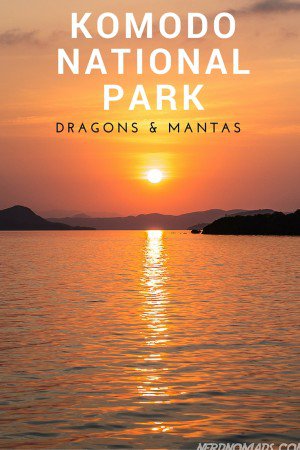 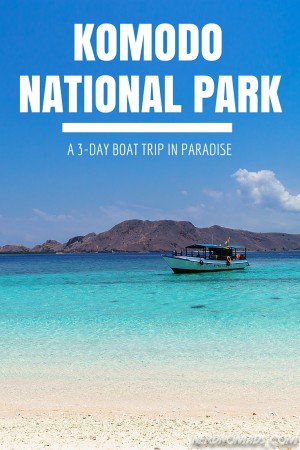