In Search Of The Komodo Dragon – Komodo National Park Day 2 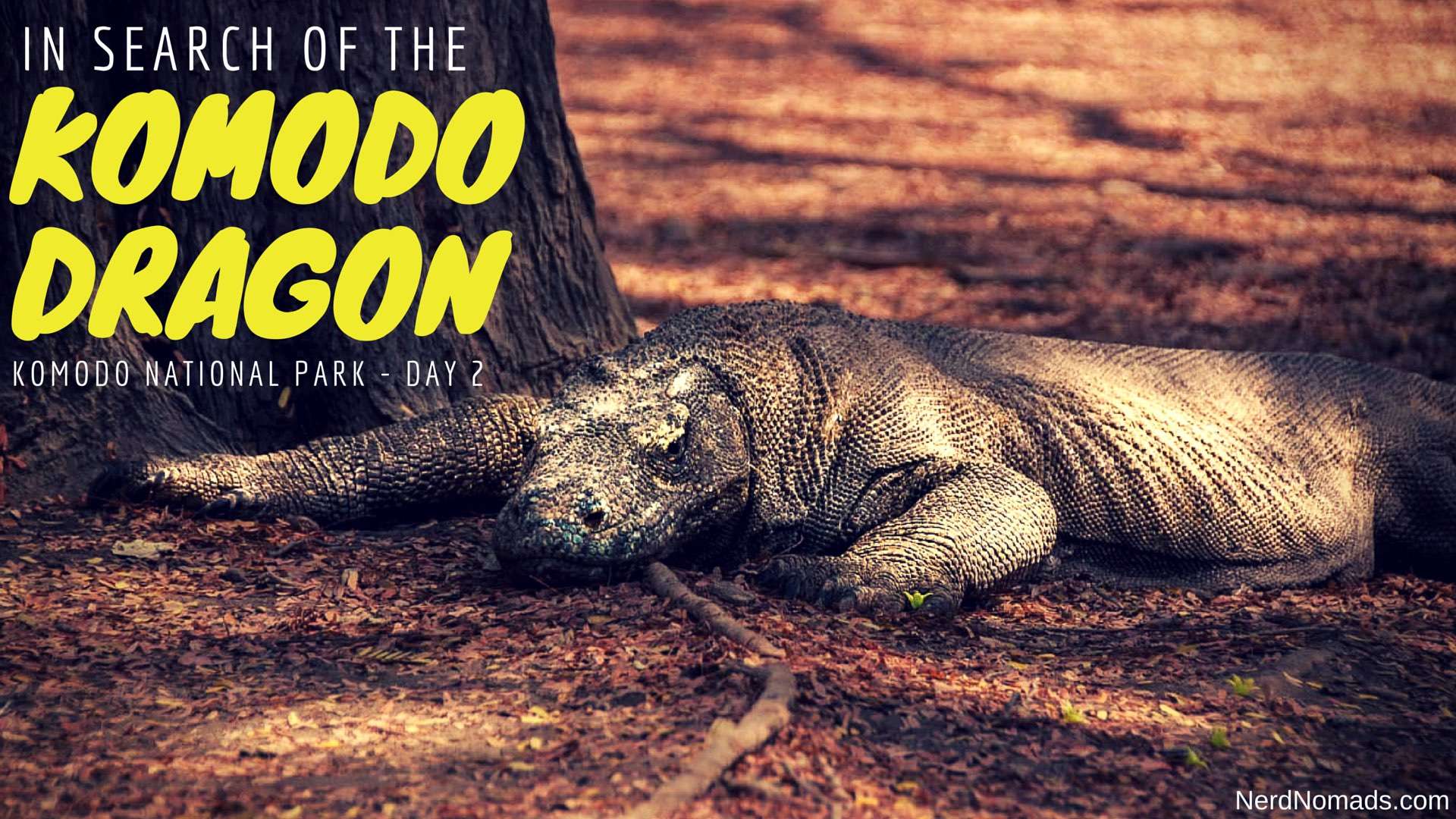 We were so happy with day one of our Komodo National Park adventure that when we woke up really early on the second day, we were excited to head out in the search of the legendary Komodo dragon. We love to sleep and usually sleep until noon if we can, but sleeping on the beach does something to you – you wake up smiling when the sun rises around 6 a.m. no matter what.

We got served delicious breakfast on the beach before heading out to sea in search of dragons and mantas. 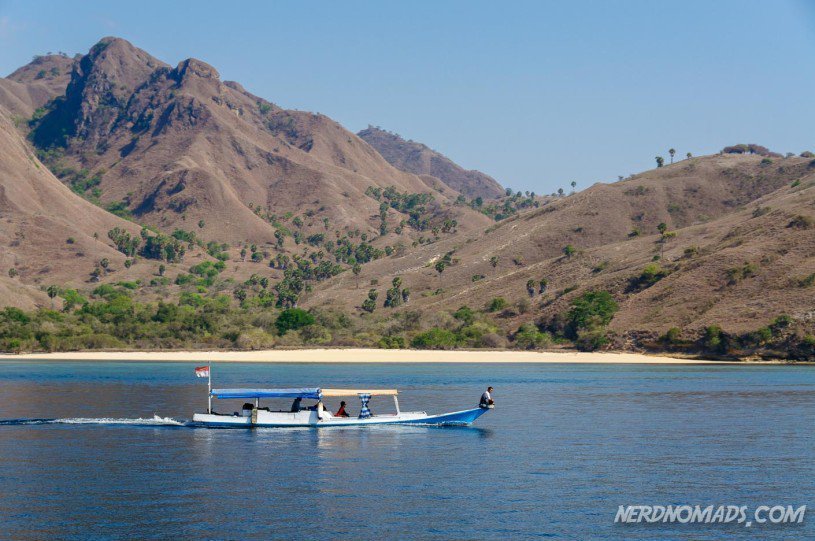 In Search Of Komodo Dragons On Komodo Island

Komodo dragon is the largest living species of lizard on earth. It can be up to 3 meters long and weigh around 70 kg! We are talking monsters here……

The Komodo dragons only live on five islands in the world, all in Indonesia – Komodo, Rinca, Flores, Gili Motang and Padar. The first island we visited in the search of Komodo dragon was, of course, the island that gave the name to the lizard – Komodo Island.

It was extremely hot that day, around 35 °c, and we were sweating like crazy. Once we entered the park, we were met by a friendly guide who organised our tour around the island. There are several tracks to choose from on Komodo Island, but since is was so freaking hot we decided to go for one of the shorter tracks.

At first we only saw deers, plenty of them. They were not afraid of us at all so we could get real close.

The deers are cute enough, but what we really came for, the Komodo dragon or Ora as it is called in Indonesia, were not to be found. 🙁 We walked and walked in the burning hot sun until we had almost given up. But then, all of a sudden we finally saw it – laying peacefully under a tree. It was a G-I-G-A-N-T-I-C Komodo dragon! Hurray! 🙂 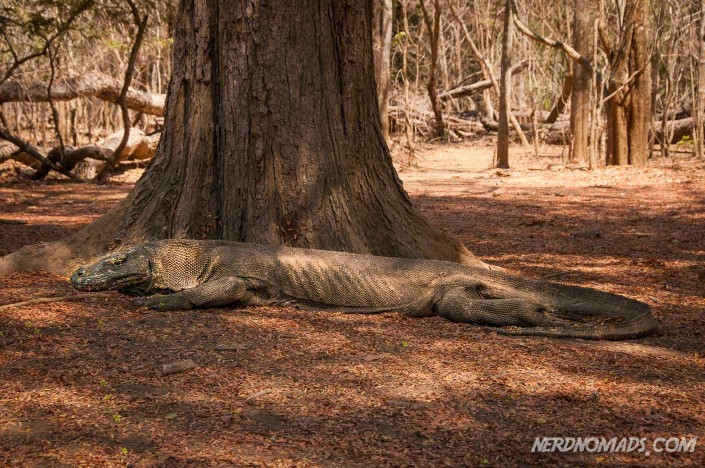 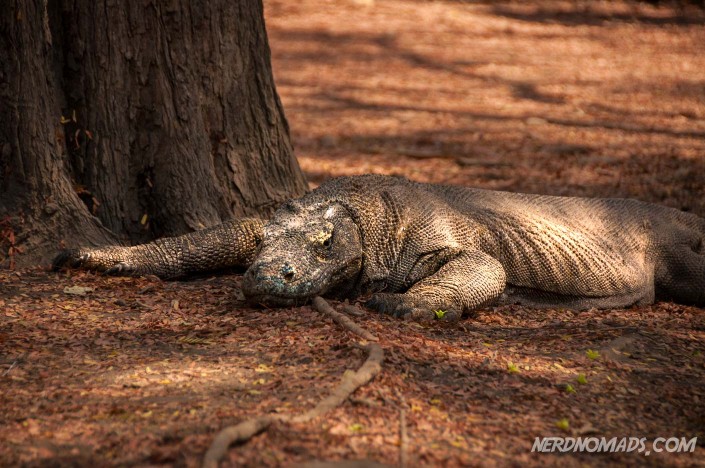 The Komodo dragon was however first recorded by Western scientists as late as 1910.

In 1926, W. Douglas Burden went on an expedition to Komodo Island to capture some Komodo dragons for the New York zoo. He set sail with a team of adventurers including a hunter, a herpetologist, a cameraman, and his wife. They returned with 12 preserved specimens of which three are stuffed and still on display in the American Museum of Natural History, and 2 live Komodo dragons. It was Burden who came up with the common name “Komodo dragon”. 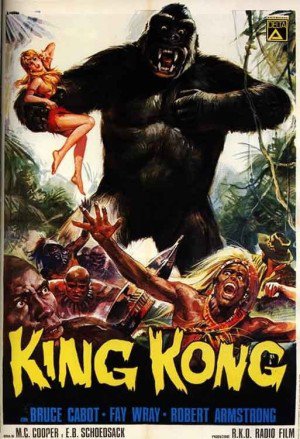 Cooper apparently liked the strength of the hard “K” in Komodo, so that may have been the reason for calling his movie King Kong.

But how has the Komodo dragon become so gigantic? One theory is that their unusually large size is because there are no other carnivorous animals filling the niche on the islands where they live. As a result of their size, these lizards dominate the ecosystems of these five islands. 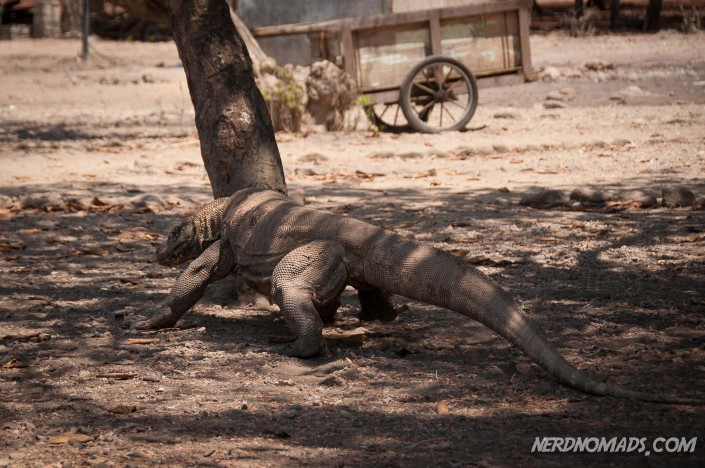 Komodo dragon`s hunting style is exceptional in the reptile world, but a bit cowardly in my opinion. The thing is that Komodo dragons have a venomous bite as their jaws produce toxins. So they ambush their prey (birds, deers and water buffalos) by biting it for instance in its leg, and then they wait and follow their prey until it dies peacefully by toxication.

Komodo dragons have an extreme sense of smell and are able to detect carrion up to incredible 9,5 km away. They can sprint up to 20 km/h in short distances as well as dive down to 4,5 meters, and when young climb up trees using their strong claws. So watch out, they can catch you anywhere!

Do Komodo dragons attack humans? Yes, they do! It is very seldom, thank god, but the guides, of course, tell these awful stories about how friends, family members, and tourists have been attacked by Komodo dragons.

Their large size and fearsome reputation make them popular zoo exhibits. Due to human activities, there are unfortunately not many left in the wild. They are listed as vulnerable by the International Union for Conservation of Nature (IUCN).

Komodo National Park is not only famous for the Komodo dragon, but it also contains a beach with pink sand. It is one of only seven pink beaches in the world.

Why is the sand pink? Well, from a distance it does not look that pink in my opinion. But once you go ashore it looks a bit pinkish from a mixture of white and red sand. The red sand is formed from pieces of red shells.

The beach is, however, a very popular tourist spot and it was packed with Chinese tourists dipping around in the ocean with bright orange vests when we visited. We did not stay on the beach for long, only snorkeled ashore, went for a short walk on the sand, and swam back out to the boat again. Not our favorite part of the Komodo National Park.

We were not that impressed by Pink Beach and it`s snorkeling, but Batu Bolong was definitely something else! It is a very small island, more like a rock, out in the ocean surrounded by an incredible coral reef. It is probably one of the best places to snorkel and dive in Komodo National Park.

The current is however pretty strong here, so you have to be careful not to be dragged on shore and cut yourself on the sharp rocks.

The coral reef at Batu Bolong is packed with colorful fishes. It felt like swimming in an aquarium. So beautiful!

The highlight of day 2 of our Komodo National Park adventure was the stop at Manta Point. OK, the Komodo dragon was cool too, but nothing beat swimming with mantas which have been high up on our bucket list for like forever.

Oh boy, we were so lucky to meet a whole pack of manta rays! Yay! 🙂

The mantas came up so close that it was actually a bit scary. It was almost like they wanted to touch us. My heartbeat sure went up! 🙂

If you get the chance to swim with mantas, whatever you do, do NOT touch them! Touching a manta harms the protective slime coating on its skin. They also don`t like being touched and might leave the area all of a sudden. 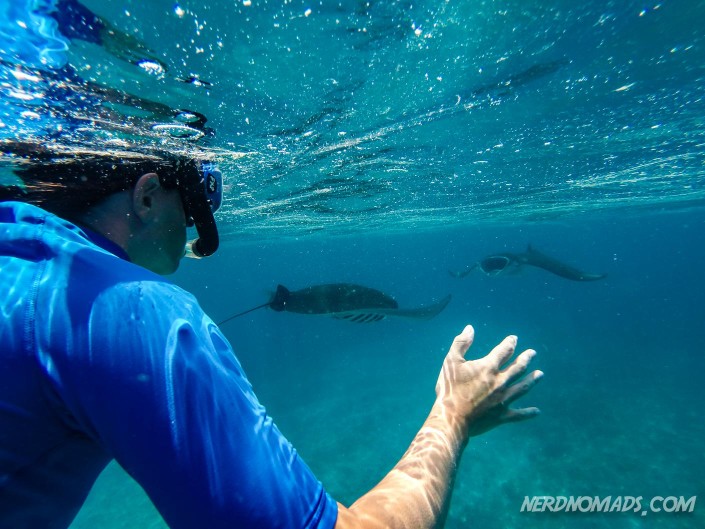 But we did not have to worry, mantas don`t eat humans, only planktons. They swim with their mouths open and filter planktons like shrimp, krill and planktonic crabs which they swallow while they swim. They eat a tremendous amount of planktons, an individual manta eats about 13% of its body weight each week! That is a LOT of planktons!

Mantas often visit cleaning stations on coral reefs to remove external parasites, where small fish eats off their parasites. Maybe that is why they all come to this spot? Or maybe it is an area with a high density of planktons? 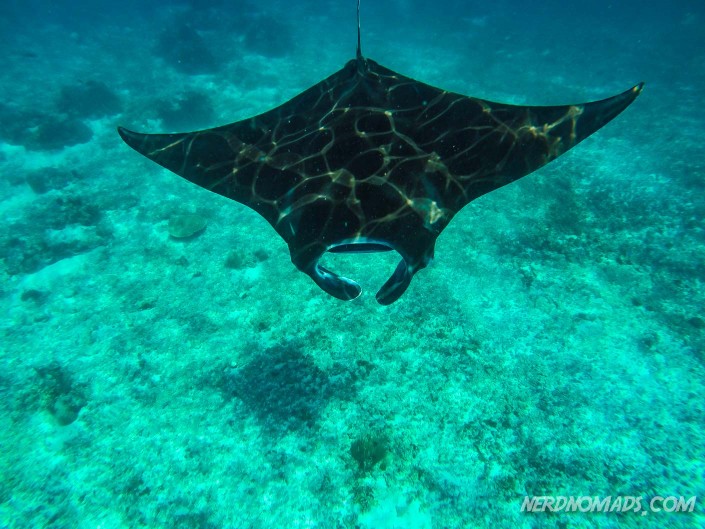 Mantas are listed as vulnerable by the International Union for Conservation of Nature (IUCN). They are threatened by pollution, entanglement by fishing nets, and direct hunt by humans for their gills to be used in Chinese medicine. Their slow reproductive rate also make them very vulnerable.

We also bumped into a huge steam of fish, sparkling like silver. They totally surrounded us. 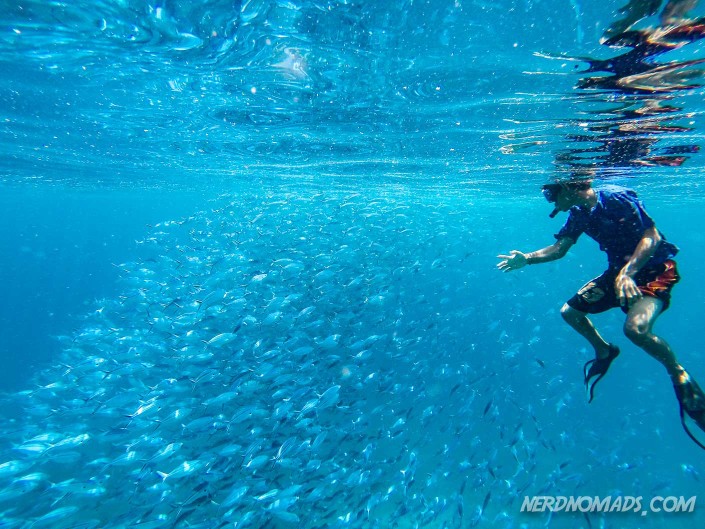 Back at camp on Sebayur Island, we got served delicious fish for dinner while watching the most spectacular sunset. 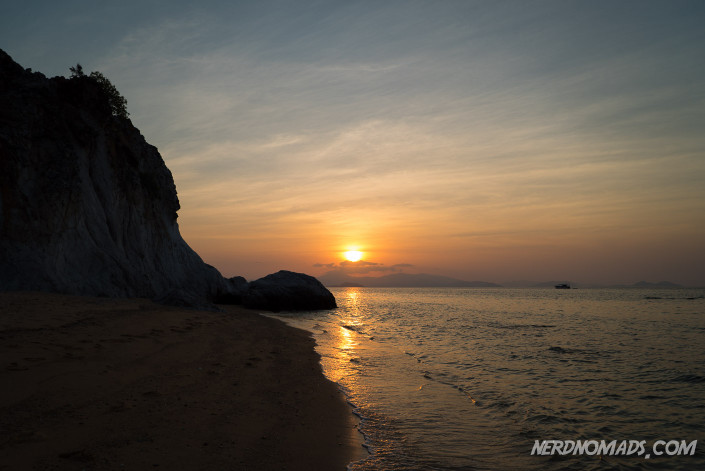 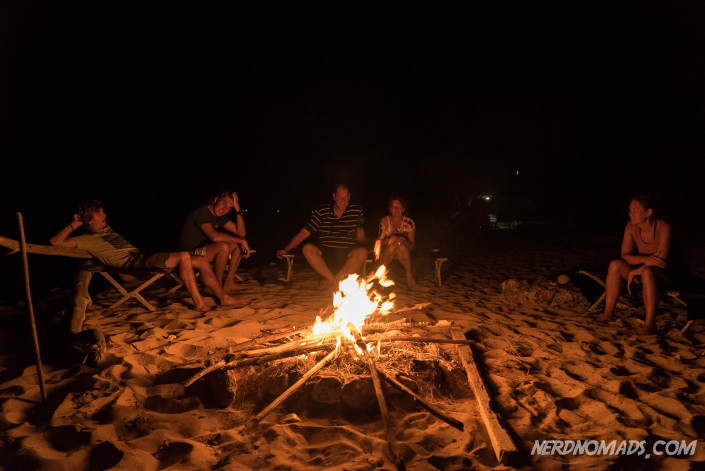 We finished off day 2 of our Komodo National Park adventure with a bonfire at the beach, before crawling into our sleeping bags on the beach under millions of blinking stars. 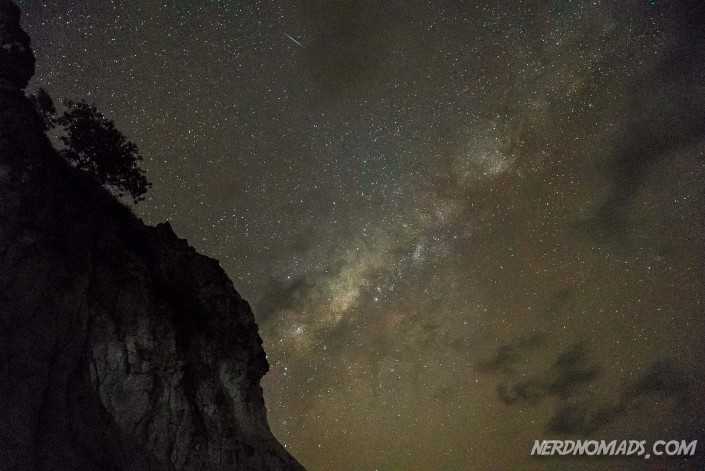 Komodo dragons, mantas, a pink beach, and thousands of colorful fish all in one day – can it get any better? The second day of our Komodo National Park adventure was just as perfect as day 1 and felt like a dream come true, especially swimming with mantas.

What will the last day of our Komodo trip bring? Stay tuned for some more Komodo dragons, a mountain trip on a deserted island, making new best friends in a fishing village, and thousands of giant bats…….

PIN THIS FOR LATER!

Hoover over the images below to pin 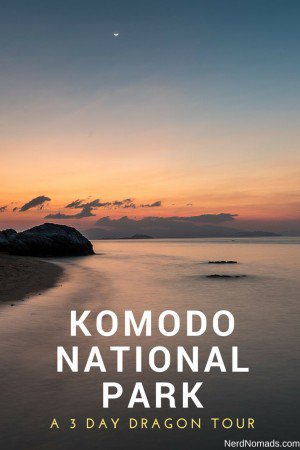 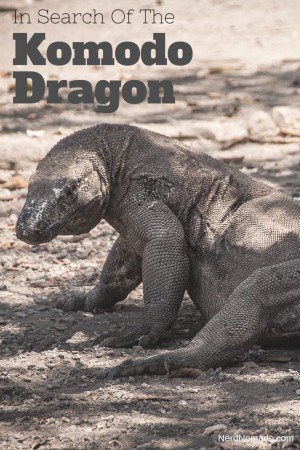 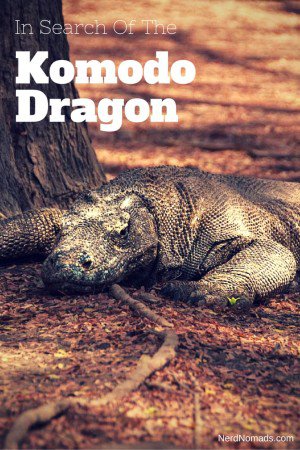 Would you like to visit Komodo National Park? Have you been to any cool national parks? Where and how was it? Please leave a comment in the comment area below. If you enjoyed reading this post, please share it on social media. Thanks! 🙂