Journey To The Lion Rock – Sigiriya 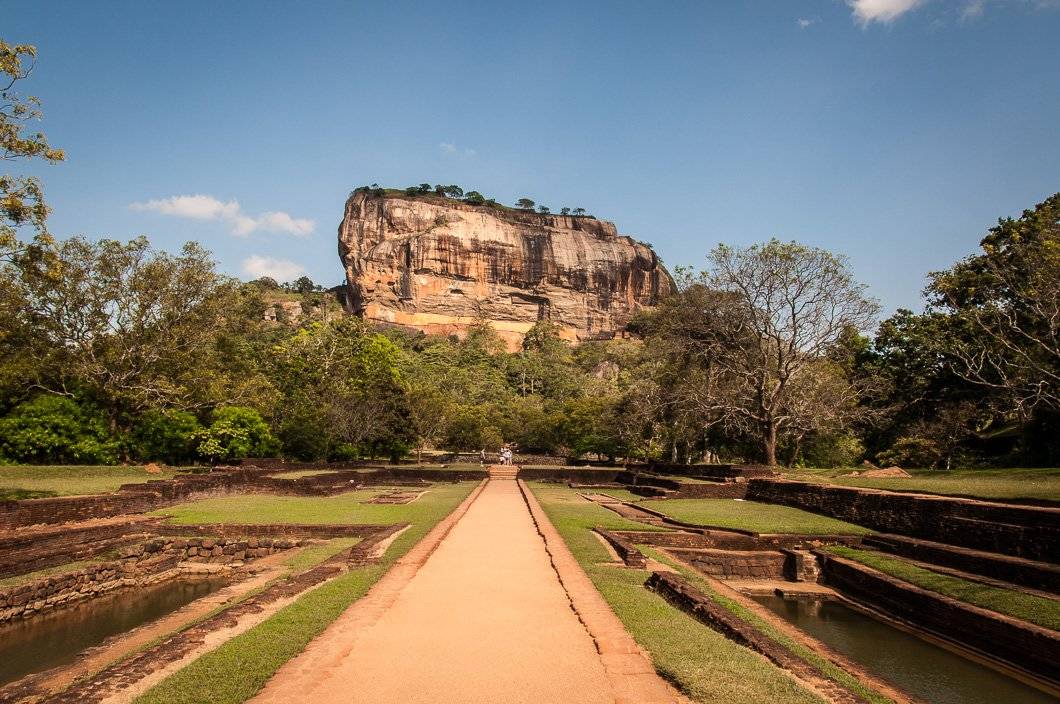 Sigiriya is the premier site and the most important place of the Cultural Triangle in Sri Lanka. We had heard about this Sigiriya throughout our whole trip around Sri Lanka, and all the taxi drivers asked us if we wanted to go to Sigiriya. So we were a bit fed up with this rock even before we had seen it, thinking “how fab can a huge rock be?!”. We actually didn`t plan to go to Sigiriya at all, but on our way to the Ancient City Polonnaruwa, our driver kind of pushed us to stop at Sigiriya to climb the Lion Rock. And we don`t regret it; WOW! What a rock! And what a great climb and amazing view from the top!

The Lion Rock – Sigiriya has a really special shape, is nearly 200 meters high, and rises mysteriously from the jungle. The rock satisfies both adrenaline freaks, the history buffs, art people, and those who are looking for a great view. Whatever attitude you bring to the rock, you won`t be disappointed!

Sigiriya was declared a Unesco World Heritage Site in 1982. All the natural cave shelters and rock overhangs throughout the rock were inhabited in prehistoric times. A myth says that King Kassapa (AD 477-495) chose Sigiriya to be the capital of Sri Lanka, and built a garden and an unassailable palace on top of the rock, after killing his father King Dhatusena. The capital and the royal palace were abandoned after the king’s death and was used as a Buddhist monastery until the 14th century. 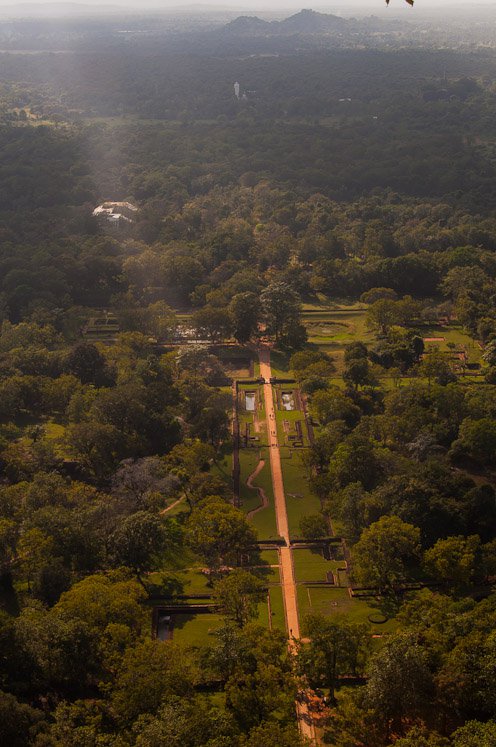 Surrounding the Lion Rock is the beautiful royal gardens, including water gardens, boulder gardens, and terraced gardens. It`s a lovely place to sit and listen to the songs of birds and the gentle sound of water. 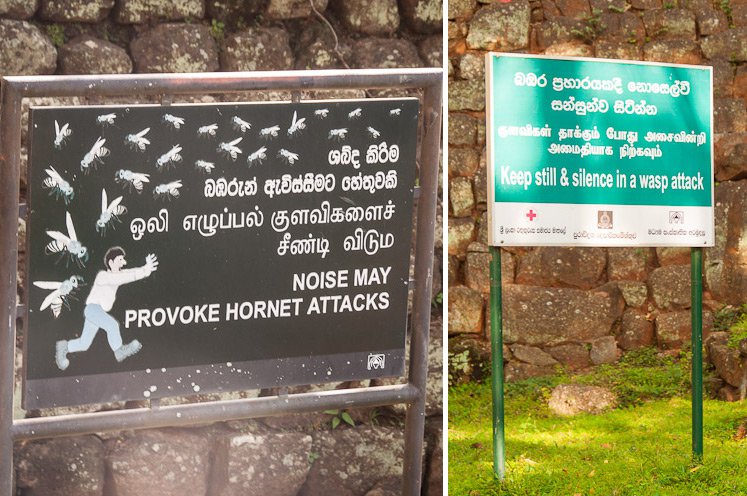 Funny signs on the way up. I doubt that I will be able to keep still and quiet if a swarm of hornets attacks me! Help! 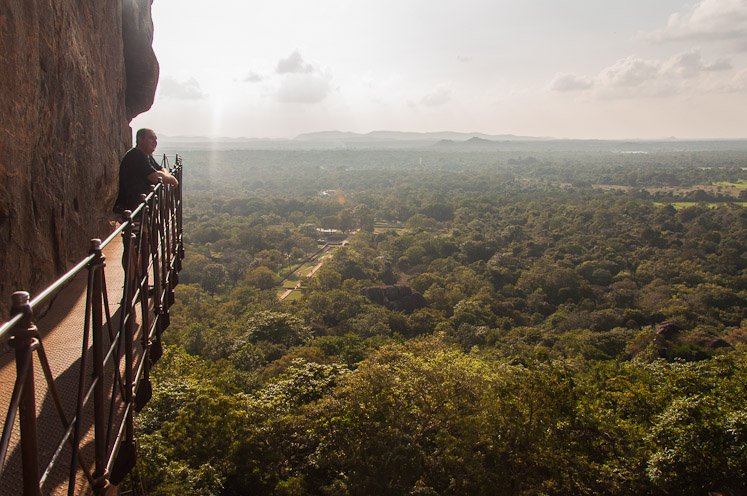 Great view all the way up, and the path is pretty airy in some places. 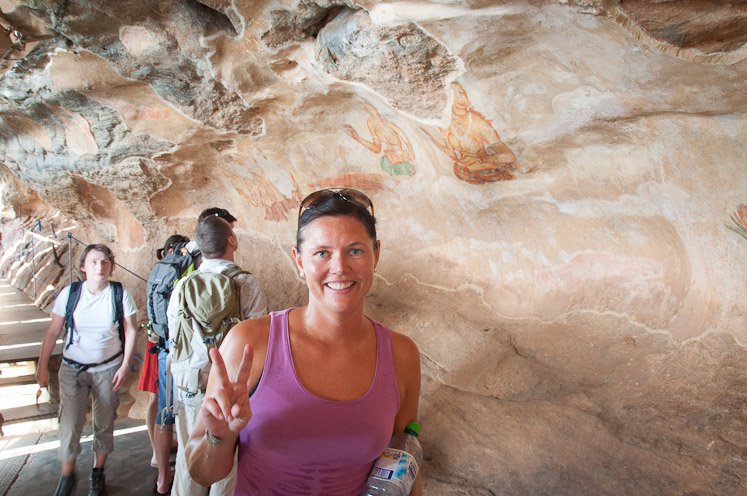 Halfway up the rock is a cave full of beautiful and impressive paintings of naked women, believed to be either Apsaras (celestial nymphs) or King Kassapa`s concubines. Hmm….. 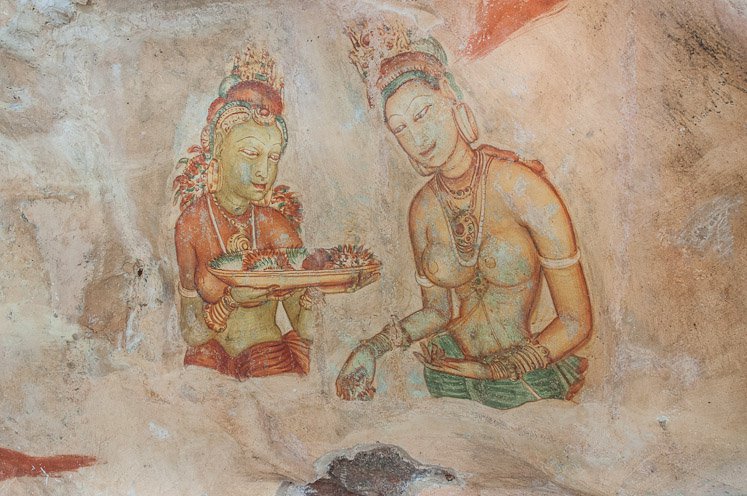 The modern theory is though that the female forms represent Tara – one of the most important figures in Tantric Buddhism. The archeologists don’t know the exact date of the impressive paintings, but they claim it is unlikely that they date as far back as to King Kassapa`s time in the 5th century.

So it`s probably not his concubines after all….though he probably had plenty of them….. 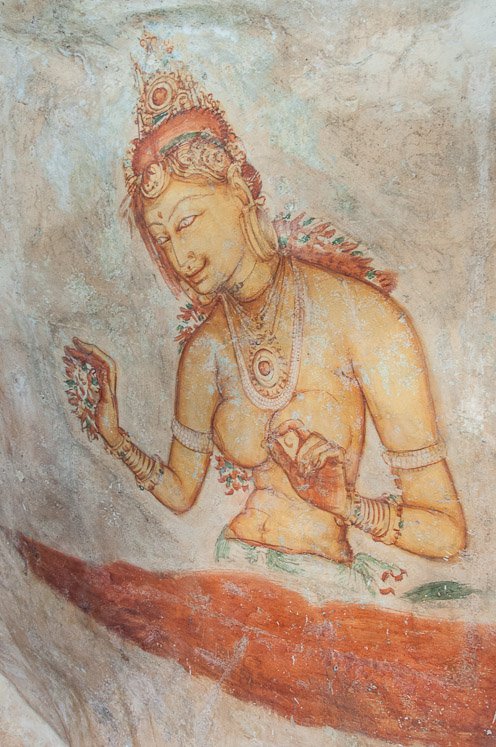 What is so remarkable about the paintings, is their color and brightness. It`s incredible that they are in such good condition. It`s as their color is glowing! 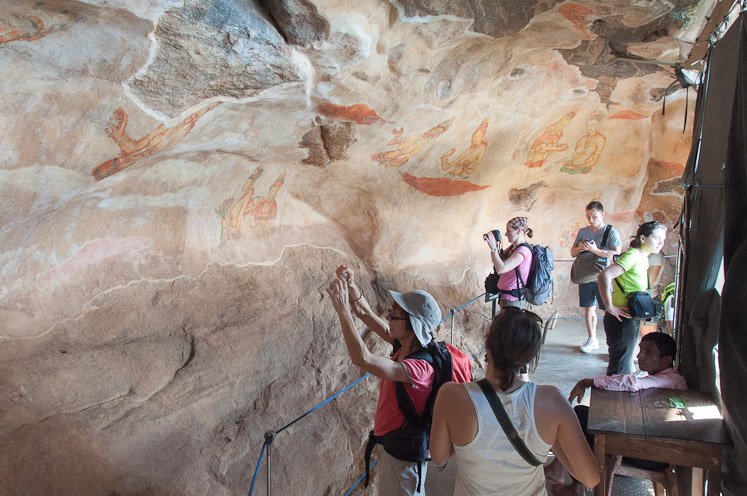 We met quite a few tourists on our way up, but it was never too crowded, and the mood was great. Everybody wanted to photograph the paintings of course, but flash is not allowed inside the cave. 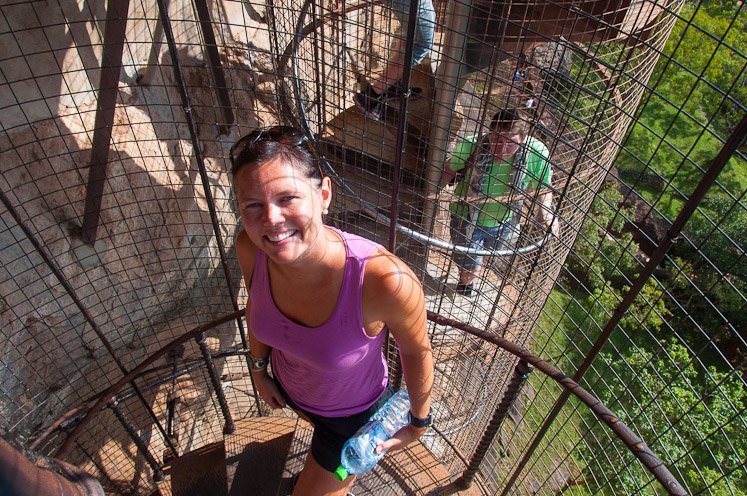 Pretty steep and a little scary on the way up. 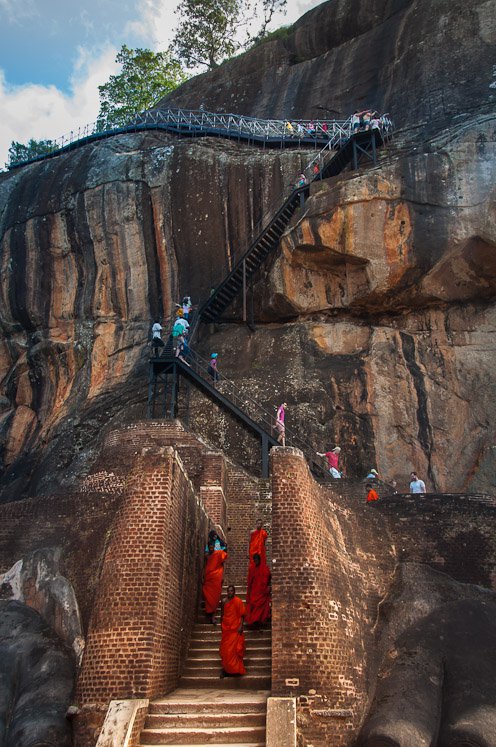 Buddhist monks on their way down. 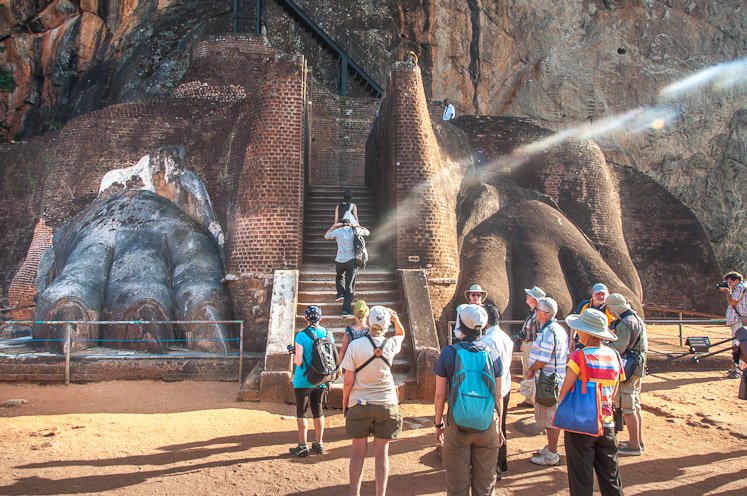 Towards the top, after passing the paintings, the pathway leads to a large platform from which the rock got its name – Lion Rock. These two huge lion`s paws were at one time connected to a gigantic brick lion, with the stairs to the final ascent to the top leading between the lion`s paws and into its mouth. Pretty cool! The lion was supposed to remind people who Buddha was Sakya-Simha – Lion of the Sakya clan, and what he spoke of was as powerful as the sound of a lion`s roar.

The lion was supposed to remind people who Buddha was Sakya-Simha – Lion of the Sakya clan, and what he spoke of was as powerful as the sound of a lion`s roar. 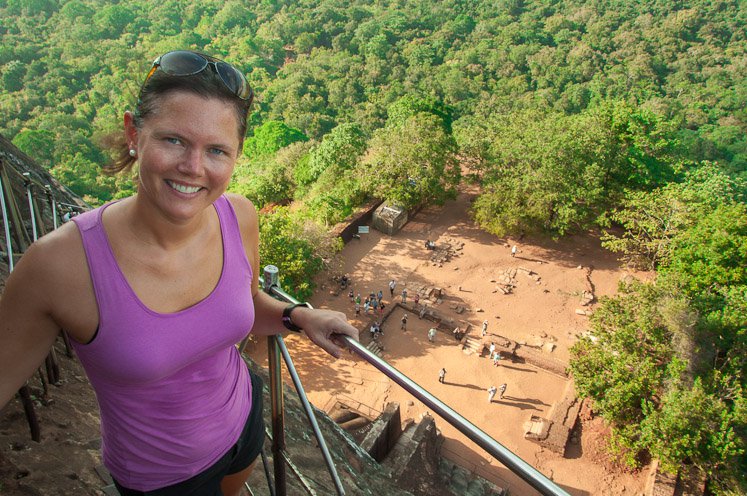 Unfortunately, the lion itself is gone, only the first steps and the paws are left, but the stairs are still pretty impressive to climb! 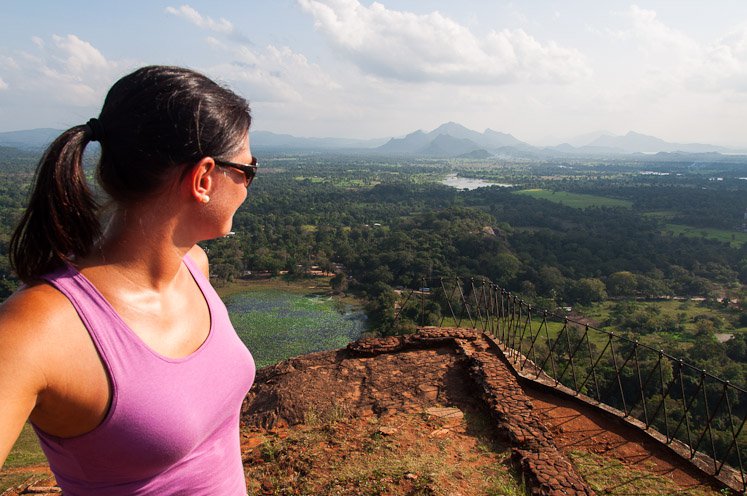 And finally, we were at the top of the Lion Rock! And what a view!! Yiihaaaa! 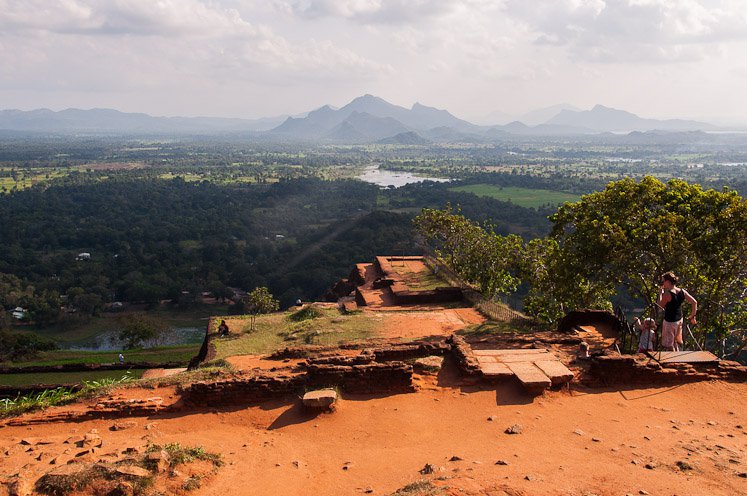 The terrace at the top covers 16 hectares (0,16 km²), and at one time it was covered with buildings of which sadly only the foundations remain today. 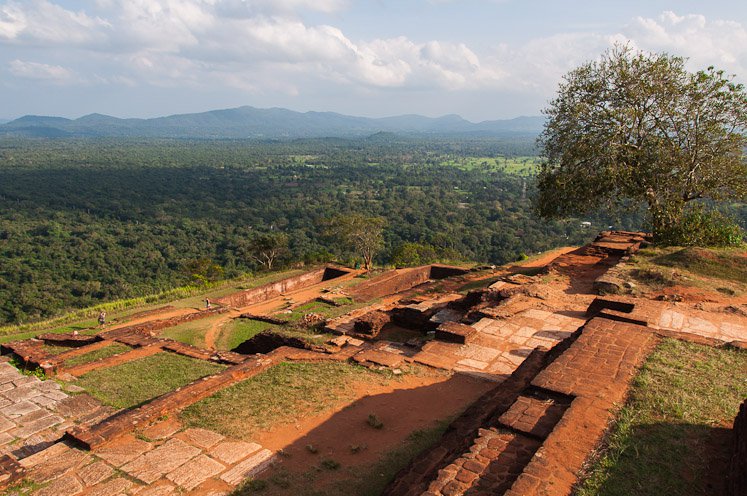 It is easy to imagine that King Kassapa had his big palace up here once, as the legend says, even though the archaeologists say that it is no evidence of a palace-like structure anywhere on the summit. They say it`s more likely that the place was used for meditation. But it`s so much cooler to picture an enormous palace with gold and jewels being up here once upon a time! 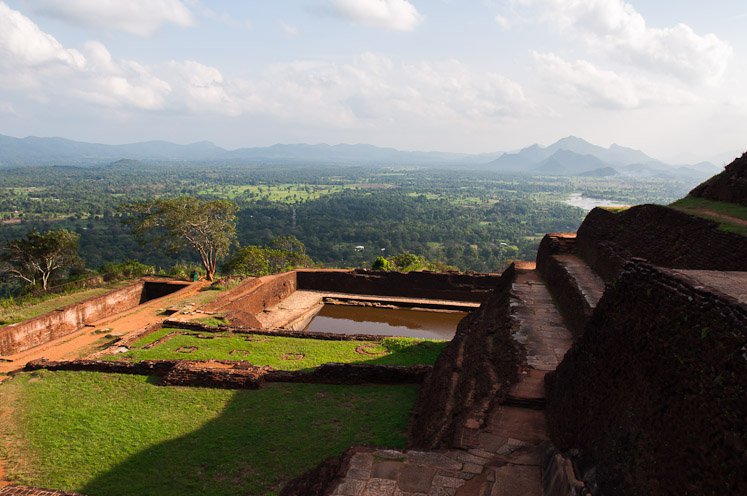 The king’s swimming pool? Or maybe these ponds were just for water storage as the archeologists claim? Ah, but that theory is really boring! 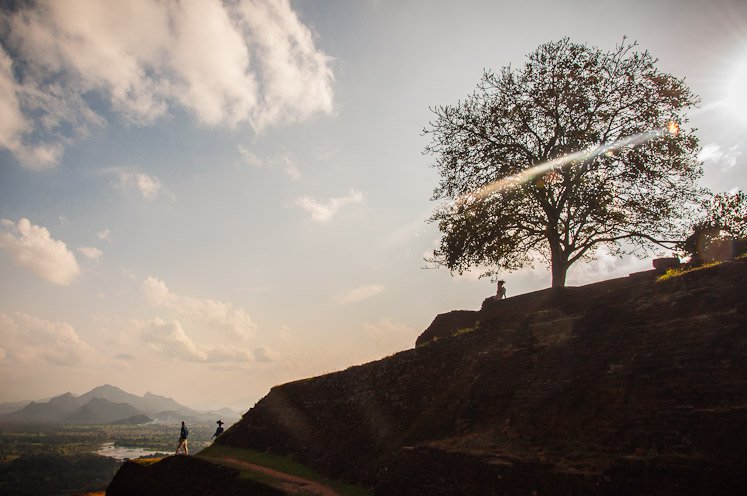 On top, there is even a smooth stone slab that looks just like a king`s throne, although it was probably just another meditation spot. Even though it is the perfect spot to sit and gaze far away over the jungle and breathe in the fresh jungle air, just as King Kassapa (or Buddhist monks) probably did 1500 years ago! 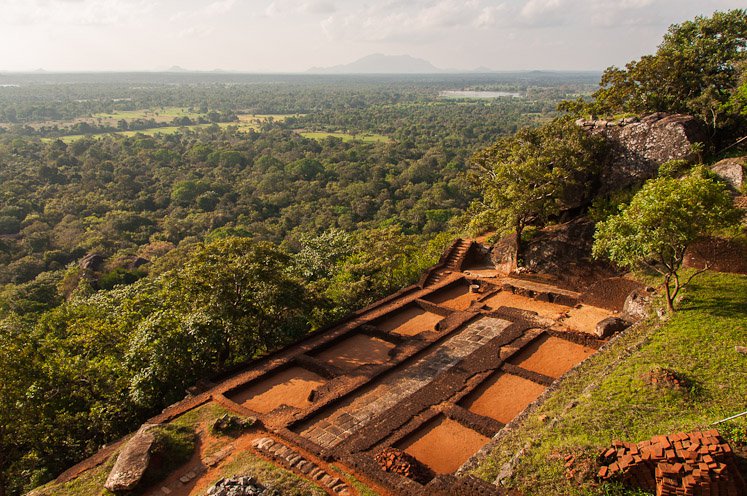 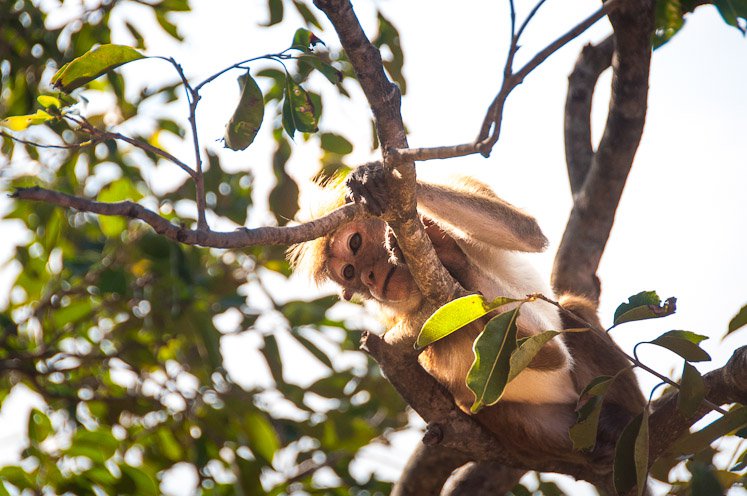 We met this cutie on the top of the Lion Rock. The monkeys were everywhere, so maybe they should rename the rock Monkey Rock now that the lion is gone?! 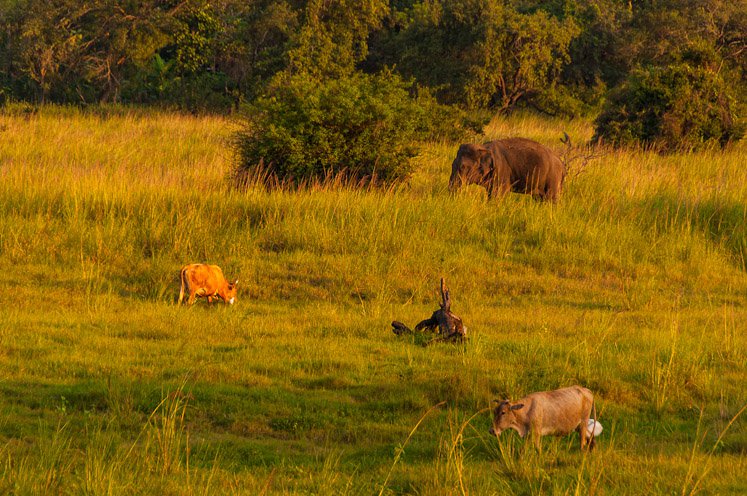 On our way from the Lion Rock, we even met a wild elephant in the jungle! It looks so relaxed hanging around, eating with the cows. Love it, and what a great ending of our journey to the Lion Rock!

PIN IT FOR LATER!
Hover over the pictures below and press the green PIN IT button that pops up: 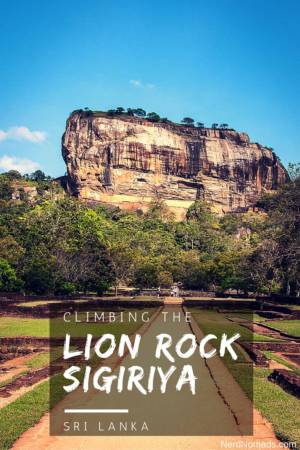 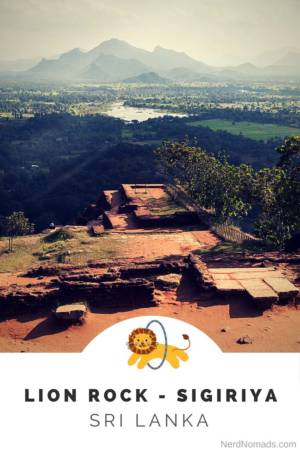 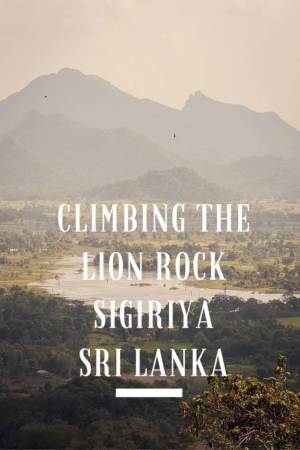 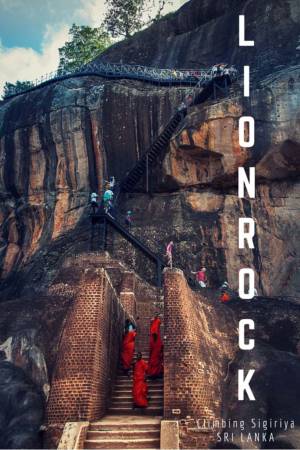