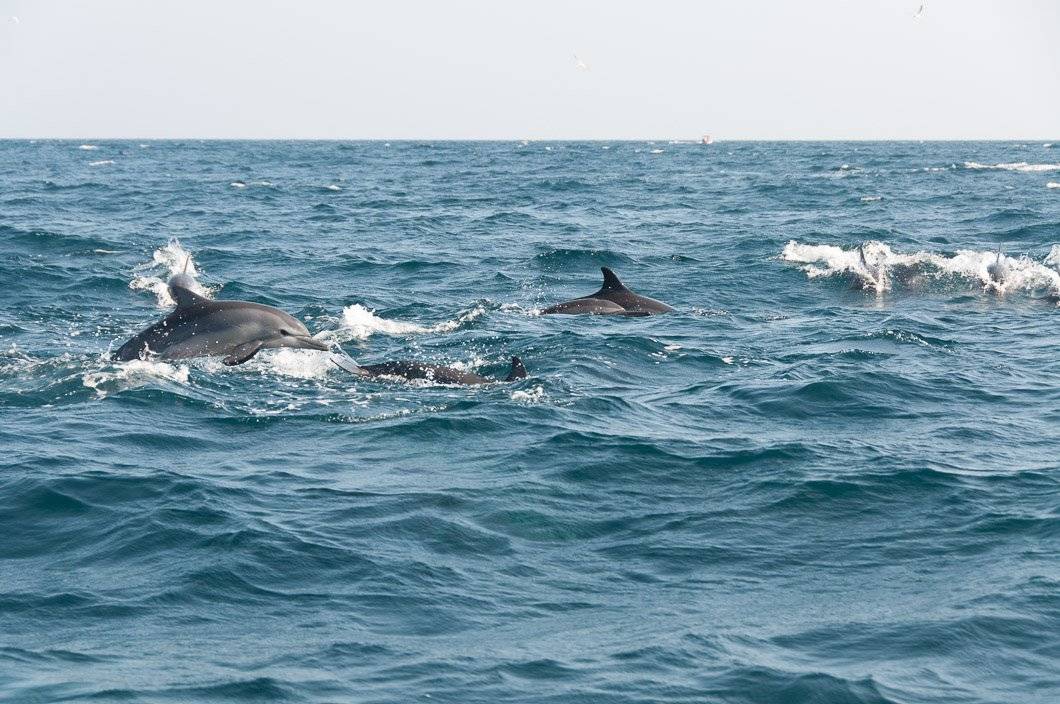 They call him Flipper, Flipper, faster than lightning. No one you see is smarter than he. And we know Flipper lives in a world full of wonder. Flying there under, under the sea…

From the soundtrack of the popular American TV-series Flipper, from the ’60s

One of the biggest draws and reasons to go up north along the coast of Colombo is the dolphin watching. Some even claim that Sri Lanka is one of the best places in the world to see dolphins.

The sea area offshore of Kalpitiya is packed with them, also sometimes whales, in the season from October to May. So, of course, we had to visit the real Flipper in between the kiting! 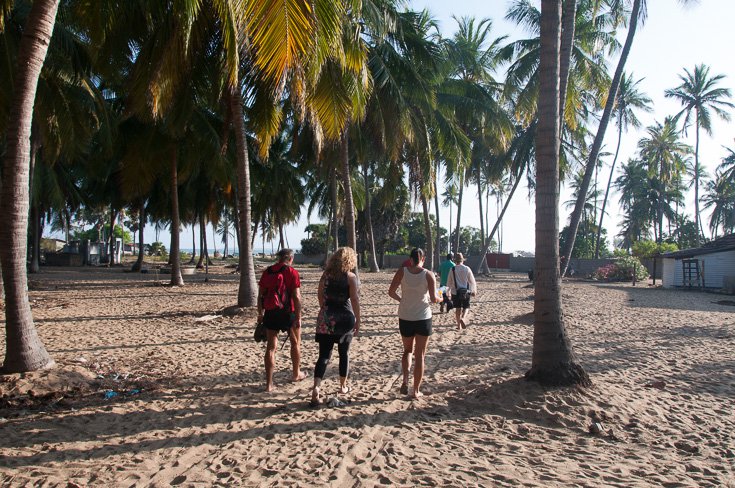 We headed off really early (in our opinion), 7:30, in the morning. We went with four other people from the guesthouse we stayed at in Kalpitiya; the Rascals Kite Resort. 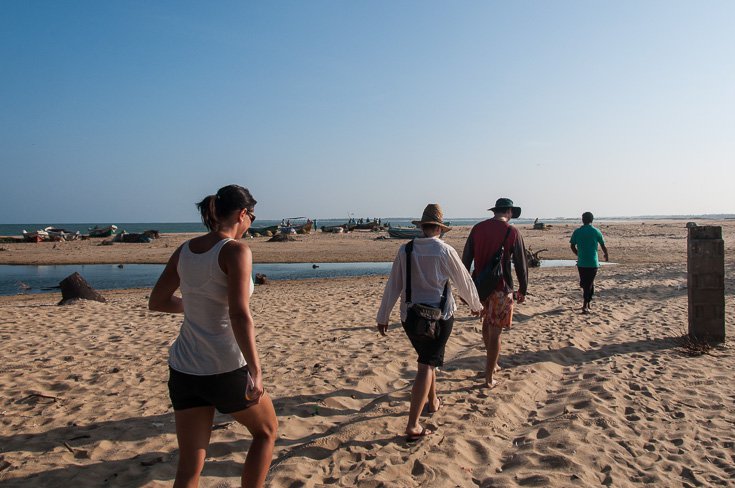 Here our new kite friends from Germany, Felix and Alex, and me are heading towards the beach in the morning sun. 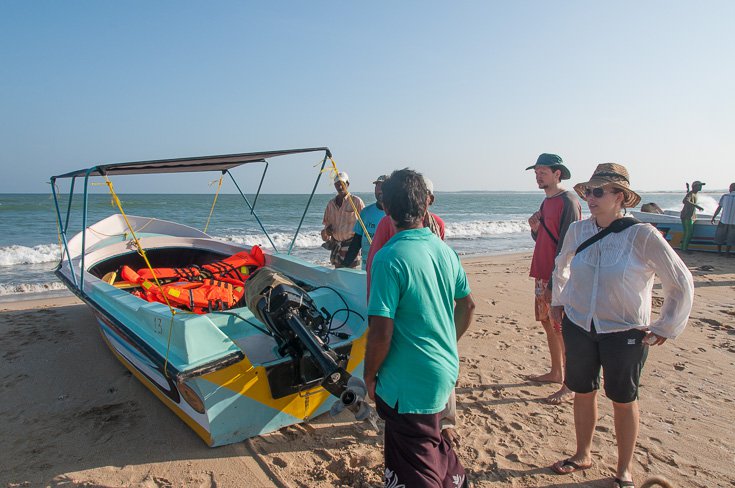 We were all a bit tired, but the beautiful sight of the beach, as well as the lovely weather soon, made us wake up. 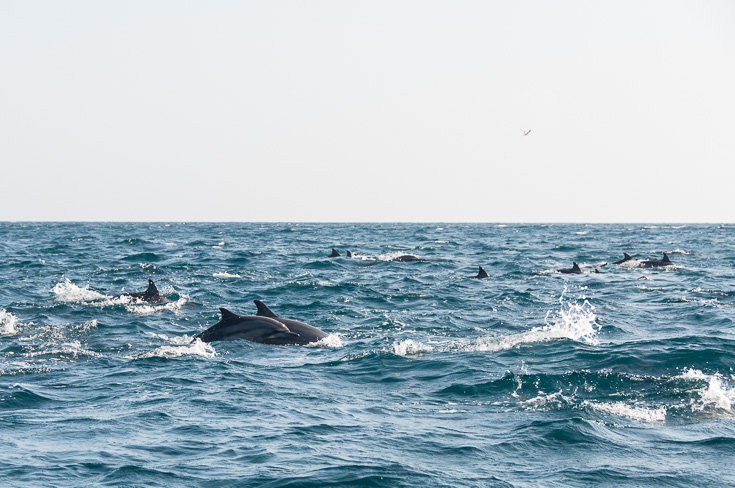 Once we got out into the big sea, after an hour’s boat trip, we were not disappointed – we saw hundreds of dolphins in all sizes! 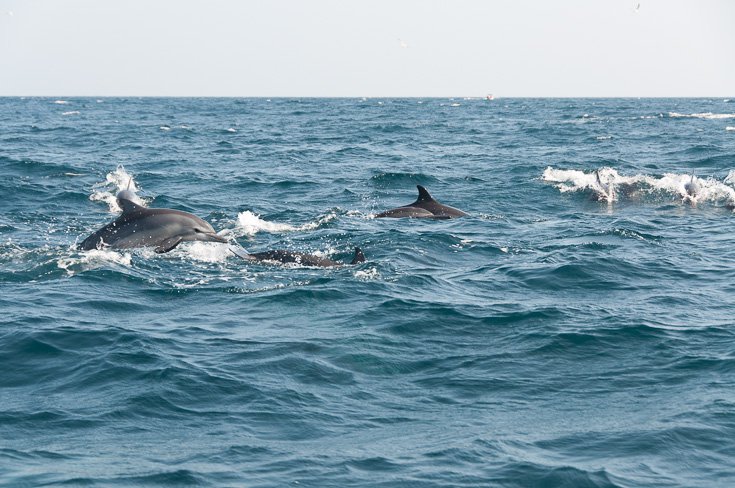 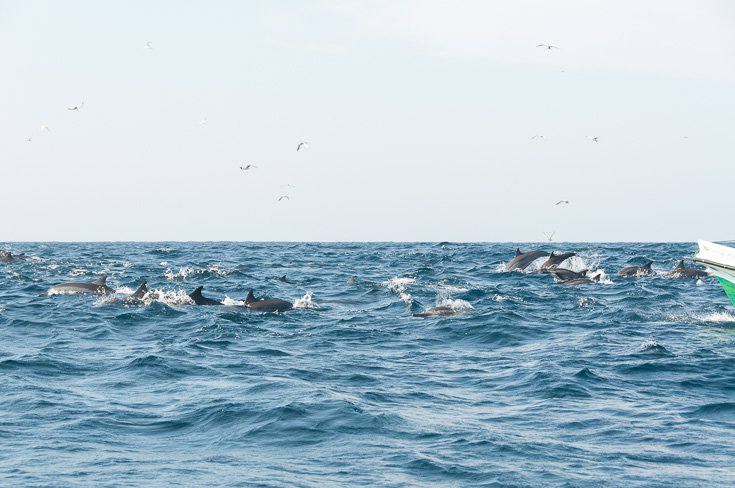 They were hunting fish, collaborating in chasing the fish into big steams. Fish and squid are the main food for dolphins. Dolphins are apparently very social animals, often living in groups of up to a dozen individuals. They can establish really strong social bonds. Scientists say that dolphins will stay with injured or ill individuals, and even helping them to breathe by bringing them to the surface if needed. 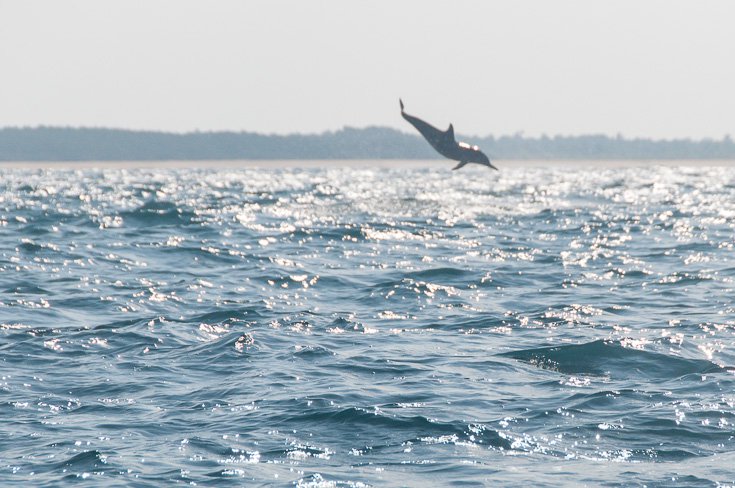 Some of the dolphins even did big jumps high up in the air! So cool! Unfortunately, this was extremely difficult to capture with our camera (yep, we are not the best photographers….). This is actually the best flying-dolphin-photo we got, so enjoy! 🙂 Not exactly National Geographic quality….

According to scientists, there can be many reasons why dolphins jump like this. When the dolphins are traveling, jumping can save energy as there is less friction while in the air. Other reasons include orientation, social displays, fighting, non-verbal communication, and attempting to dislodge parasites. Or just for fun, as dolphins can be really playful! 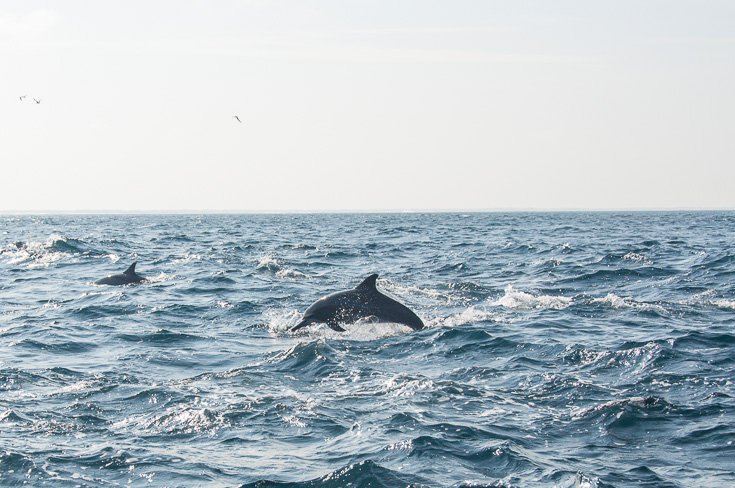 Dolphins have a streamlined body, adapted perfectly for fast swimming. 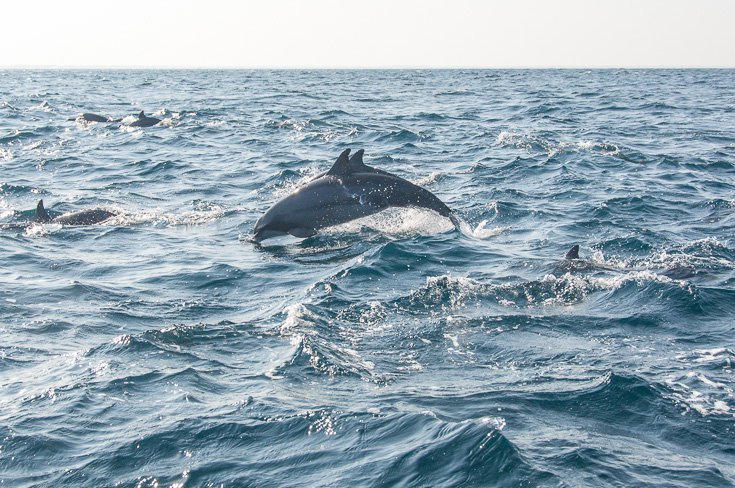 The dolphins looked really happy, jumping all around us. Dolphins are often regarded as one of Earth’s most intelligent animals, and they communicate using a variety of clicks, whistle-like sounds, and other vocalizations. 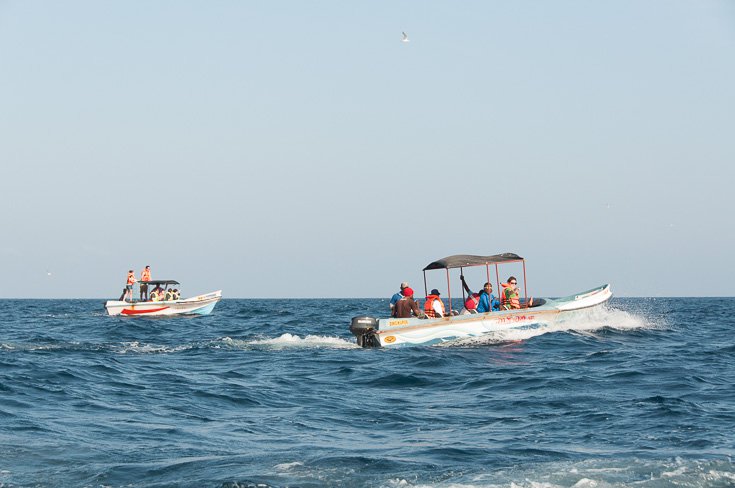 There were also other boats out on the sea in the same mission as us. 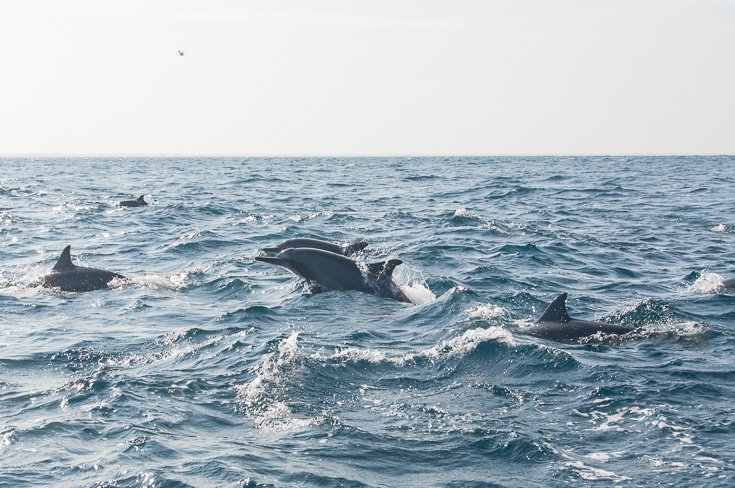 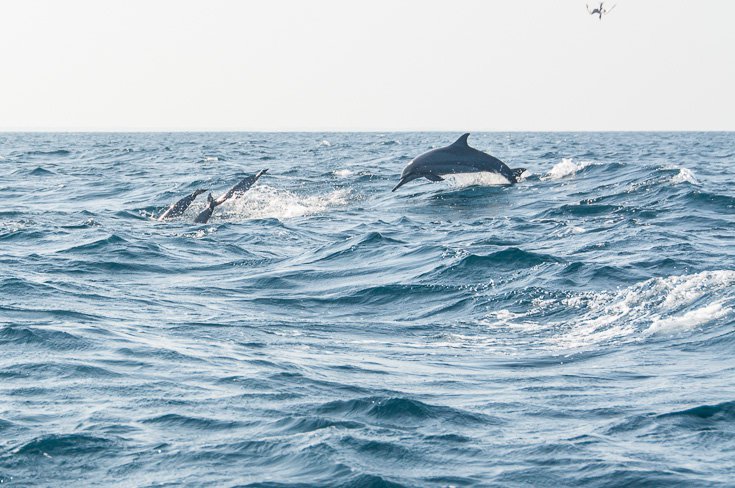 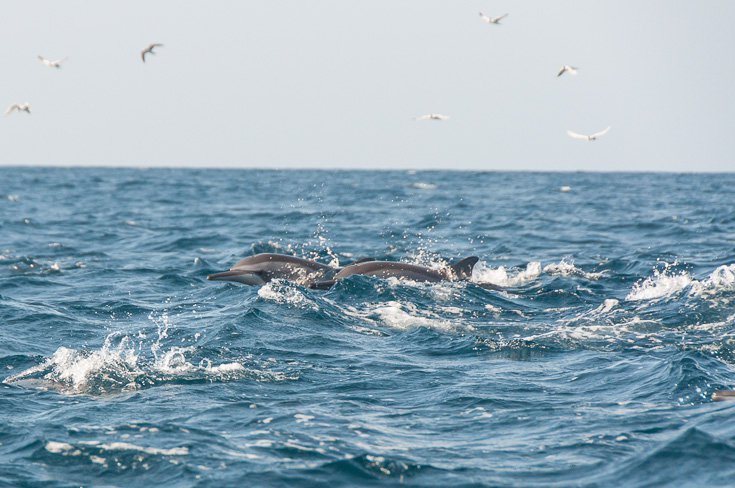 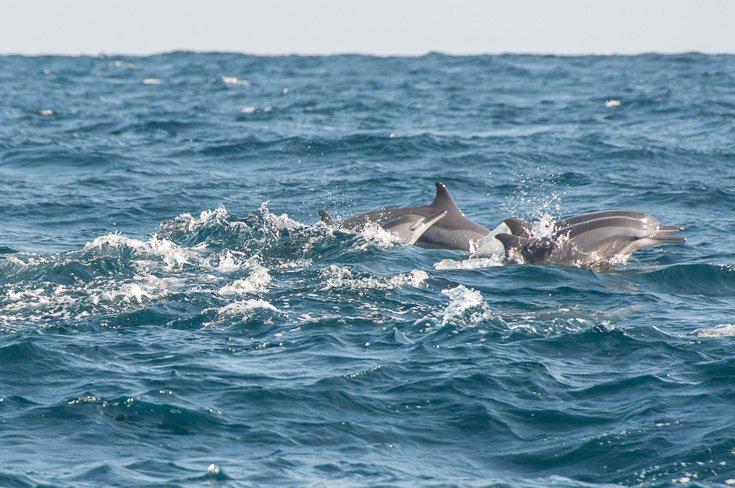 We saw both grown-up dolphins, as well as baby dolphins. So cute! 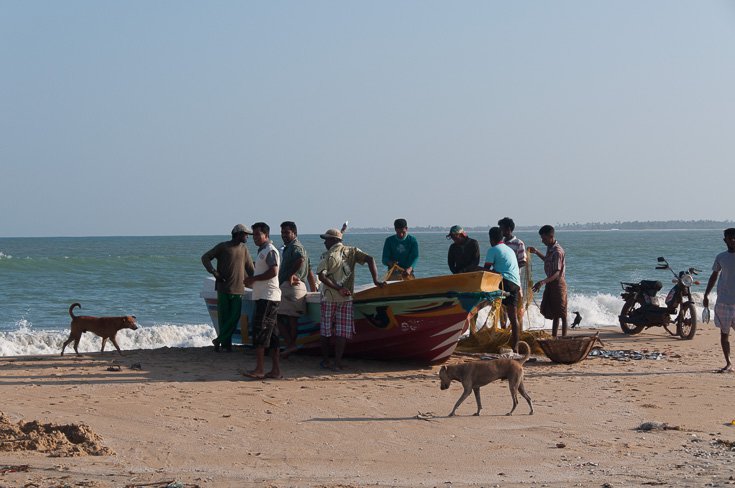 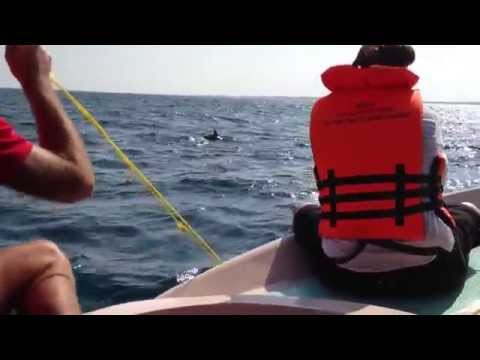 Well back ashore, we headed back to our beds for a little nap before the winds hit and we could go kiting. What a lovely start of a beautiful day, meeting the real Flipper! 🙂

PIN IT FOR LATER!
Hover over the image below and press the green PIN IT button that pops up: 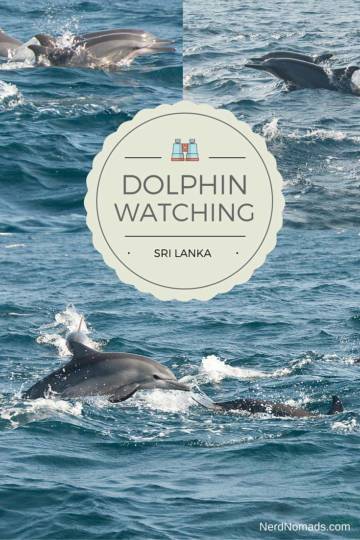 If you are interested in visiting Sri Lanka, please read our Ultimate Travel Guide to Sri Lanka: